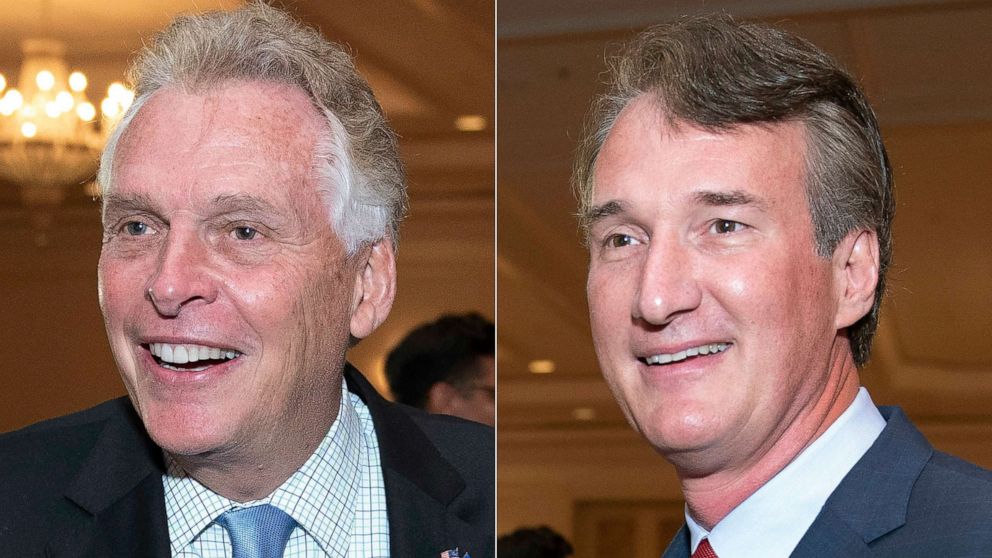 Republican Glenn Youngkin will be the next governor, ABC News projected.

Republican Glenn Youngkin, a former private equity executive running his first campaign for political office, will be the next governor of Virginia, ABC News projected.

Virginia’s off-year gubernatorial race is always seen as the first major political test for both parties following a presidential election. The matchup between Democrat Terry McAuliffe, who first served as governor of Virginia between 2014 and 2018, and Youngkin, was no exception.

It was the first major competitive race since former President Donald Trump left office, and McAuliffe sought to closely tie Youngkin, a former private equity executive and political newcomer, to the former president throughout the general election campaign. Youngkin, who received Trump’s endorsement in May after securing the GOP nomination, had to walk a fine line between fully embracing the former president and his support and keeping enough of a distance so as not to alienate voters who did not back Trump but might have been open to supporting Youngkin over McAuliffe.

Virginia trended blue during Trump’s presidency. In 2019, Democrats won trifecta control of government in Richmond by flipping the state legislature. In 2020, the commonwealth rejected Trump by nearly double the vote of the 2016 election. But despite Democrats’ gains, the race between McAuliffe and Youngkin had been a toss-up, with the Democrat only leading by a couple points according to FiveThirtyEight’s polling average.

When he first ascended to the governor’s mansion by a slim 2.5-point margin, McAuliffe broke the “Virginia curse” of candidates losing the commonwealth’s gubernatorial race if they had the same party affiliation as the current occupant of the White House. With his longtime friend President Joe Biden in the White House, McAuliffe hoped to break it again — but came up short.

Youngkin’s projected victory is a decisive warning shot to Democrats going into the 2022 midterms as they attempt to protect their slim majorities in the House and Senate.

*Counties are colored red or blue when the % expected vote reporting reaches a set threshold. This threshold varies by state and is based on patterns of past vote reporting and expectations about how the vote will report this year.