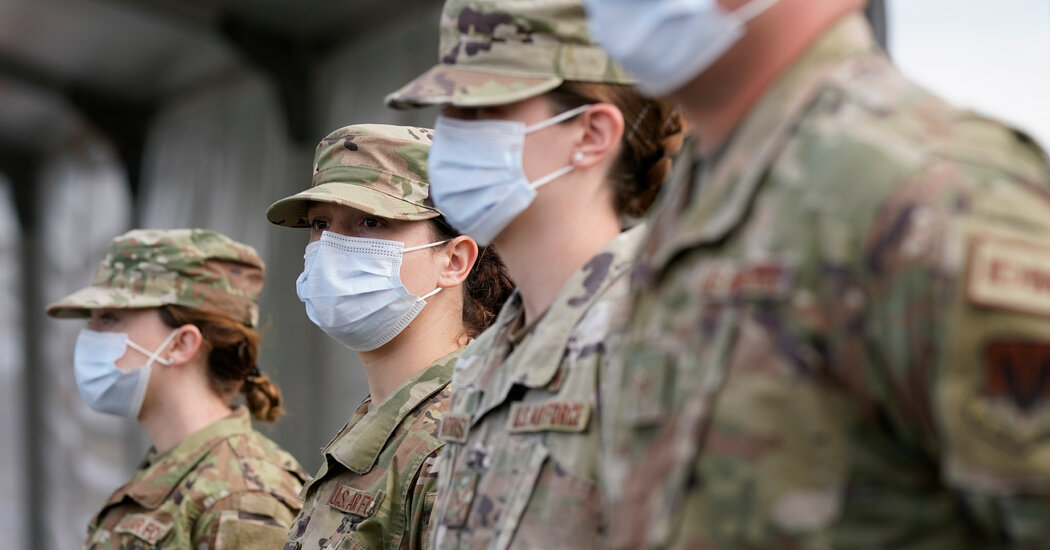 Almost 97 percent of active-duty members of the Air Force — the first branch of the U.S. military to reach its deadline for coronavirus vaccinations — have received at least one dose of vaccine, military officials said Wednesday. That percentage is in line with those for active-duty military members in most branches of service whose deadlines have not yet arrived.

Though the 10,636 Air Force members who remain unvaccinated are only a small sliver of the branch’s 326,855 active-duty troops, they still represent a large number of people to be facing possible expulsion for failing to comply with the vaccine mandate the Pentagon issued in August.

Many of them have requests pending for an exemption of some kind.

Some 4,933 troops have sought a religious exemption, but so far, not a single member of the military has been granted one. A smaller number have been given an administrative exemption — for example, because they are planning to leave the military soon —  and others have received medical exemptions, some of which could be reversed if their medical condition changed. The Air Force said it would take 30 days to review all pending exemption requests.

The vaccination deadline for the Navy and Marines arrives later this month. The Army, the largest service branch, has set a date in mid-December. Members of the Guard and Reserves in all branches will also be given more time. Civilian Pentagon employees are required to be fully vaccinated by Nov. 22.

Refusing the vaccine without an exemption is grounds for expulsion from the military, but Defense Secretary Lloyd J. Austin III has given commanders wide latitude to decide how to coax, cajole and ultimately punish those who won’t get shots.

“Each case is going to be treated specifically and individually, as it ought to be,” John Kirby, a spokesman for Mr. Austin, said this week. “Can we promise you that there will be absolute uniformity across the board? No.”

Vaccine reluctance in the military and the Department of Veterans Affairs mirrors that in civilian society, where vaccination rates are generally lower among people who do not face a strict vaccine mandate.

Trump prefers company of sycophants and has no friends, Mar-a-Lago member says