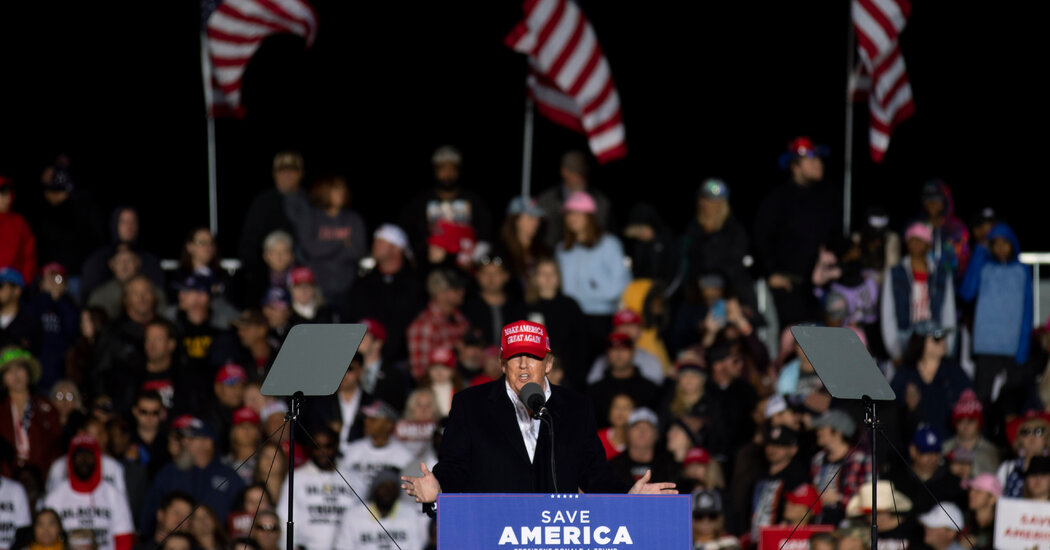 WASHINGTON — During a rally in Arizona on Saturday, former President Donald J. Trump repeated his lie that the 2020 election was stolen and made other false claims about the pandemic and the attack on the Capitol on Jan. 6 last year. Here’s a fact check.

False. There is no evidence that white Americans are being denied access to vaccines or treatments.

Mr. Trump referred to a Wall Street Journal opinion column criticizing New York State’s guidelines on two limited antiviral treatments that ask health providers to prioritize the therapies for immunocompromised patients and those with risk factors. The guidelines, which were released in late December, said, “Nonwhite race or Hispanic/Latino ethnicity should be considered a risk factor, as longstanding systemic health and social inequities have contributed to an increased risk of severe illness and death from Covid-19.”

State officials have defended their guidelines by citing data from the Centers for Disease Control and Prevention, which show that Black, Hispanic and Native Americans are about twice as likely to die from Covid-19 than white Americans. A spokeswoman for New York State’s Department of Health told Fox News that race did not disqualify patients from treatment but that the guidelines instead considered race as one risk factor.

In New York, white residents are more likely to be vaccinated than Black residents, which is in line with most of the country.

“Why did Nancy Pelosi and the Capitol Police reject the more than 10,000 National Guard troops or soldiers that I authorized to help control the enormous crowd that I knew was coming?”

False. There is no evidence that Mr. Trump ever made a request for 10,000 National Guard troops or that Speaker Nancy Pelosi rejected such a demand. The speaker of the House does not control the National Guard.

Vanity Fair reported that Mr. Trump had floated the 10,000 figure to the acting defense secretary at the time, Christopher C. Miller, the night before Jan. 6, 2021, when Mr. Trump’s loyalists stormed the Capitol in a bid to stop the certification of Joseph R. Biden Jr.’s election victory. According to Mr. Miller, Mr. Trump had suggested 10,000 National Guard troops were required to contain the crowd he anticipated for his rally that day.

But there is no record of Mr. Trump making that request. The Pentagon’s timeline of events leading up to the riot notes that the Defense Department reviewed a plan to activate 340 members of the District of Columbia’s National Guard, “if asked.” But the timeline makes no mention of a request of 10,000 troops by Mr. Trump. Nor did a Pentagon inspector general report on the breach, which instead referred to suggestions by Mr. Trump that his rally on Jan. 6 had been conducted safely. A Pentagon spokesman also told The Washington Post that it had “no record of such an order being given.”

“So we lost, they say, by 10,000 and yet they flagged more than — listen to these numbers — 57,000 highly suspicious ballots for further investigation, one. 23,344 mail-in ballots were counted despite the person no longer living at that address — little, little problem. Five thousand people appear to have voted in more than one county.”

Key Figures in the Jan. 6 Inquiry

Mark Meadows. Mr. Trump’s chief of staff, who initially provided the panel with a trove of documents that showed the extent of his role in the efforts to overturn the election, is now refusing to cooperate. The House voted to recommend holding Mr. Meadows in criminal contempt of Congress.

Scott Perry and Jim Jordan. The Republican representatives of Pennsylvania and Ohio are among a group of G.O.P. congressmen who were deeply involved in efforts to overturn the election. Both Mr. Perry and Mr. Jordan have refused to cooperate with the panel.

Phil Waldron. The retired Army colonel has been under scrutiny since a 38-page PowerPoint document he circulated on Capitol Hill was turned over to the panel by Mr. Meadows. The document contained extreme plans to overturn the election.

John Eastman. The lawyer has been the subject of intense scrutiny since writing a memo that laid out how Mr. Trump could stay in power. Mr. Eastman was present at a meeting of Trump allies at the Willard Hotel that has become a prime focus of the panel.

False. Mr. Trump won the state of Arizona by about 10,500 votes, but his claim of tens of thousands of fraudulent votes is baseless. These figures are based on a report by Cyber Ninjas, a company Republicans hired to examine voting in the state.

Election officials have said that the claims the company raised are not evidence of fraud. For example, Cyber Ninjas found that tens of thousands of voters did not live at addresses recorded by a specific commercial database, but election officials have noted that college students, military personnel or people who own vacation homes could have different addresses than those listed in the database. Similarly, the company’s claims of double voting could be explained by the mere fact that many Arizona residents have the same name or birth year.

Moreover, Cyber Ninjas itself failed to prove that Mr. Trump had won Arizona. Rather, its audit showed that in Maricopa County, which includes Phoenix, Mr. Biden had 99 additional votes and Mr. Trump had 261 fewer votes.