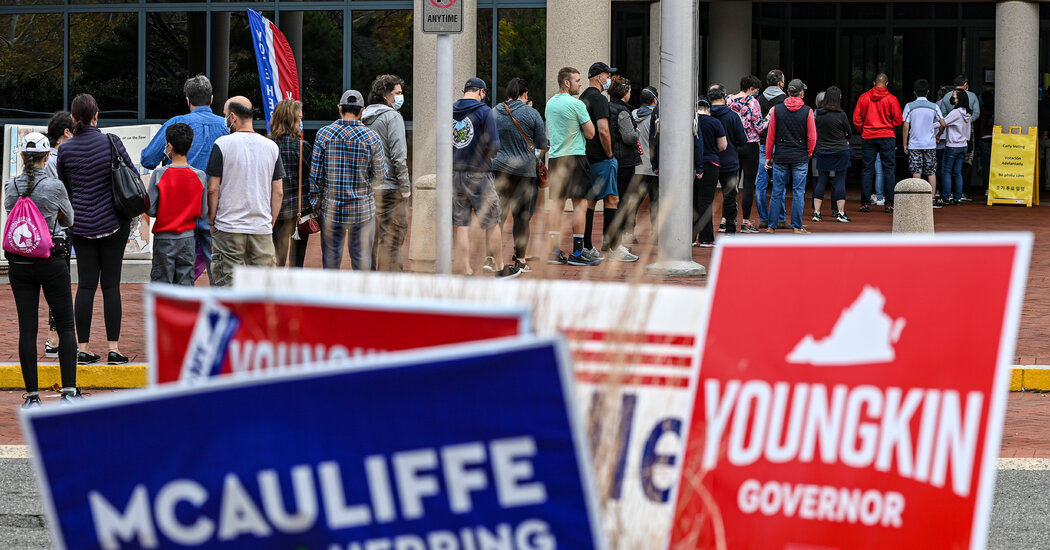 Sign up here to get On Politics in your inbox on Tuesdays and Thursdays.

Ever since Barack Obama swept into the White House on the strength of record turnout, it has been an article of faith among Democrats that the more people who vote, the better the party will fare.

When turnout sagged, during the 2010 and the 2014 midterm elections, Republicans won wave elections. In 2016, fewer people voted than in 2012 and Donald J. Trump won the presidency, shocking Democrats and turbocharging a more explicit Republican argument that making voting harder would make it easier for the G.O.P. to win elections.

Then turnout jumped again in the Trump years — in Virginia four years ago, in special elections and in the 2018 midterms. Joseph R. Biden Jr. ousted Mr. Trump in a national election with record-high turnout. Republicans spent the next year, in states they control, fighting to make it harder to vote and promoting lies that the 2020 turnout had been stocked with fraudulent Democratic votes.

How then to explain the election on Tuesday in Virginia, where Glenn Youngkin, now the Republican governor-elect, beat former Gov. Terry McAuliffe in a contest in which at least 25 percent more votes were cast than in any governor’s race in the state’s history? (The number will go up; mail-in ballots postmarked by Election Day will be counted as long as they are received by this Friday.)

Making it easier to vote worked.

In this week’s election, Mr. McAuliffe won 200,000 votes more than Northam did when he won the 2017 election in a blowout. He won nearly 600,000 more votes than he did in 2013 when he beat Kenneth Cuccinelli II to become governor. He beat his internal turnout targets in Northern Virginia, Richmond and the Norfolk area. Turnout was strong in Black precincts, college towns and the suburbs, all traditional areas of strength for Democratic candidates.

Yet Mr. Youngkin still got more votes, buoyed by turnout near presidential-election levels across rural Virginia and better than anticipated numbers in the outer suburbs of Washington. He won far more votes than Mr. McAuliffe’s team or virtually any of the public polling had anticipated.

“We’re at a dangerous inflection point where we have one group of people who assumes turnout solves all of our problems and another group that wants to tune out whole swaths of voters,” said Guy Cecil, the chairman of the Democratic super PAC Priorities USA. “There are millions of people across the country who are inclined to vote for Trump or Republicans who don’t vote.”

In some of the most important battleground states, like Wisconsin and Pennsylvania, Mr. Cecil said, a majority of the voting-age public is white people without college degrees, a demographic that has been trending away from Democrats since 2008 and broke strongly against Mr. McAuliffe in Virginia, according to exit polling.

If turnout in the 2022 midterms spikes in Wisconsin and Pennsylvania, which both have Senate and governor’s races on the ballot, it may not necessarily benefit the Democratic candidates.

What to Know About the 2021 Virginia Election

For Republicans who have spent the last year proffering the false claim that Mr. Biden won the 2020 election only because of a major fraud scheme, the Virginia results required a bit of rhetorical gymnastics.

Amanda Chase, the conspiracy-theory-minded Virginia state senator, said on Twitter on Wednesday that she would draft legislation to “put the guardrails back on our elections” and added that she hoped Mr. Youngkin agreed to “a full forensic audit” of the 2020 presidential election.

Mr. Cuccinelli, the former Virginia attorney general who lost to Mr. McAuliffe in 2013, late Wednesday called for Mr. Youngkin and the incoming Republican majority in the state’s House of Delegates to “reverse the Democrat-inflicted damage to voter integrity in our state.”

And John Fredericks, the conservative talk radio host who was chairman of Mr. Trump’s 2016 and 2020 campaigns in Virginia, credited Mr. Youngkin’s victory to his building an “election integrity task force” to monitor polling places across the state.

“If you have a voter integrity operation in place on the front end and you have 93 percent of your precincts covered with trained poll watchers and election workers, the opportunity for voter irregularities drops dramatically,” Mr. Fredericks said. “The voter integrity team here will be used as model for the midterms.”

Mr. Youngkin’s poll watchers, according to a Washington Post account of their activities during early voting, observed Virginia’s voting process and concluded it was free of the fraud that Mr. Trump and others baselessly claim exists. And there were no significant reports of voter intimidation from Republican poll watchers, as Democrats had feared.

What does all of this tell us?

In the current environment, when Republicans are furious with an increasingly unpopular Democratic president, if Democrats and the White House don’t figure out a way to turn their political fortunes around, it may not matter if Democratic candidates reach their turnout goals in the midterms.

Midterm elections over the past decade have hinged on whose voters are angrier. Right now, Democrats are arguing among themselves about legislation they’ve been negotiating for months, while Republicans have adopted a coded phrase as a stand-in to shout obscenities about Mr. Biden.

It’s not hard to predict which side’s voters will be more eager to turn out next year.

Join us next week, Nov. 9-10, for two days celebrating the 20th anniversary of DealBook. We’re bringing together some of the most influential minds in business, policy and culture to take stock of a world in the midst of rapid reinvention, grappling with the ripples of Covid and rewriting the rules in real time.

Speakers will include, among others, Secretary of State Antony Blinken, Matthew McConaughey, Tim Cook and Meghan Markle.

On Politics is also available as a newsletter. Sign up here to get it delivered to your inbox.

Is there anything you think we’re missing? Anything you want to see more of? We’d love to hear from you. Email us at [email protected].