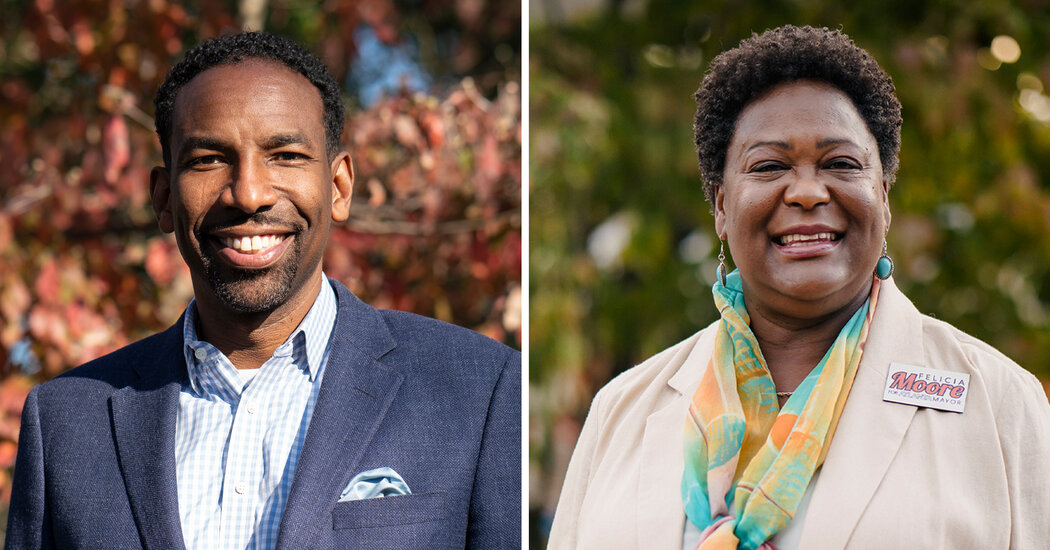 ATLANTA — The mayoral election in Atlanta produced a surprise result, as Kasim Reed, a former two-term mayor once considered a front-runner in the race, failed to finish in either first or second place, denying him the chance to compete in the Nov. 30 runoff and ending his surprising political comeback bid.

Felicia Moore, the City Council president, finished first in the race with about 41 percent of the vote, followed by Andre Dickens, a city councilman, who narrowly bested Mr. Reed.

Mr. Dickens received 23 percent of the vote, and Mr. Reed received about 22 percent. The race for second place was so close that a final call was not made until Thursday.

Both Ms. Moore and Mr. Dickens had attacked Mr. Reed for the series of corruption scandals that unfolded on his watch at City Hall, resulting in numerous indictments and guilty pleas from high-ranking city officials.

Amid the controversy, Mr. Reed, who had been one of the most high-profile politicians in the state, virtually disappeared from the political stage after leaving office in January 2018. He officially returned to the scene in June, announcing that he would seek a third term after the current mayor, Keisha Lance Bottoms, declared she would not run for a second term.

Mr. Reed led a crowded field of contestants in early polling with a message heavily focused on a promise to fix the city’s violent crime problems. But the corruption concerns appeared to have dragged him down, even as he reminded voters that he had never been charged or indicted after a lengthy federal investigation of his administration.

Like Mr. Reed, both Ms. Moore, 60, and Mr. Dickens, 47, have promised to get a handle on violent crime. Both candidates have also focused on affordable housing, an increasingly hot topic in a rapidly gentrifying city.

Because so much of the race leading up to Tuesday’s vote was focused on Mr. Reed and questions about his fitness for office, it is unclear how Ms. Moore and Mr. Dickens will seek to differentiate themselves in the runoff phase, and which lines of attack they might try against each other.

On Tuesday night, after The Associated Press had projected that Ms. Moore would advance to the runoff, she hugged and shook hands with supporters and volunteers as “I Gotta Feeling” by the Black Eyed Peas played.

Ms. Moore said the election was about “a new Atlanta — an Atlanta where everyone’s going to feels safe. An Atlanta where when you spend your money for your taxes and your services, you’re going to get them.”

In a late-night speech to supporters, Mr. Dickens, too, declared victory. “You chose a path to the future tonight,” he said. “The people decided that it was time to save the soul of our city, and to move this campaign forward into the runoff.”

Mr. Dickens, who joined the City Council in 2013, is a product of Atlanta’s public school system who earned an engineering degree from Georgia Tech. In recent years he has focused on ways to help disadvantaged people find jobs in the city’s burgeoning technology sector.

Ms. Moore has served on the City Council for more than two decades, winning election after serving as head of her neighborhood association. During the current campaign, she has emphasized good-government reforms she championed at city hall, where she was an outspoken critic of perceived excesses in the Reed administration.

Both Mr. Dickens and Ms. Moore are Black. Their advancement into the runoff ensures that the city’s streak of electing African American mayors, which stretches back to 1973, will be unbroken, despite a significant influx of white residents in recent years.

Trump prefers company of sycophants and has no friends, Mar-a-Lago member says