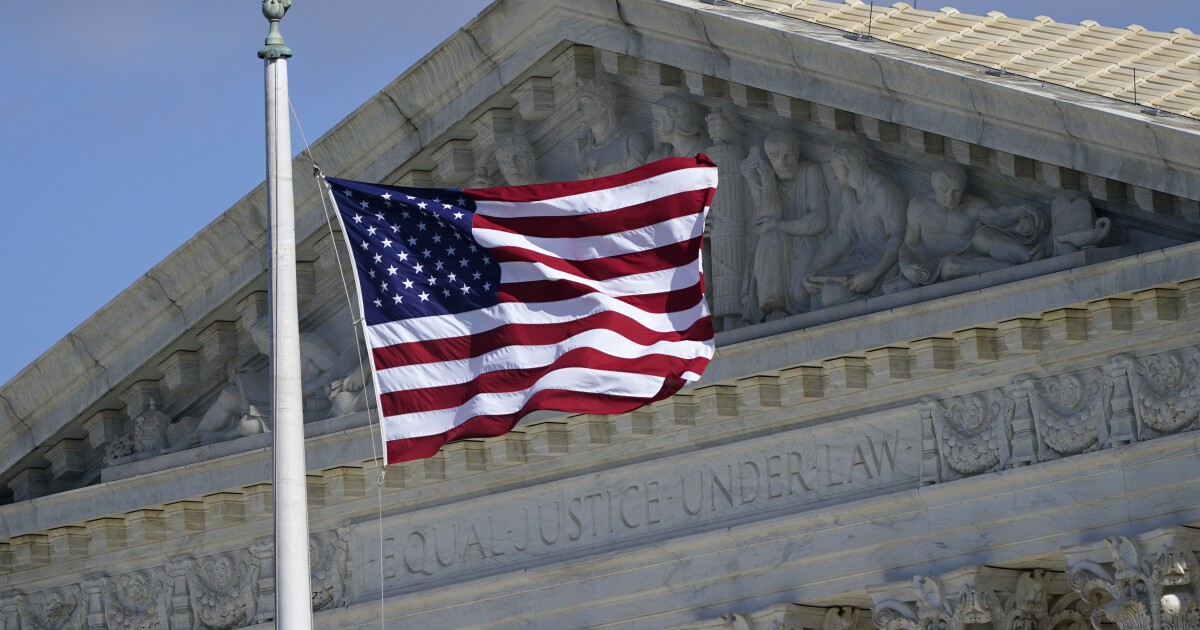 The Supreme Court is preparing to decide whether the 2nd Amendment gives Americans a right to carry a loaded gun when they leave home — and some justices are looking back to the England of 1328 for an answer.

At issue is the meaning of the “right to keep and bear arms” that was added to the Constitution in 1791 and expanded by the high court in 2008.

In a dispute to be argued Wednesday, a newly strengthened conservative Supreme Court majority will have an opportunity to go even further in broadening the rights of gun owners.

The late Justice Antonin Scalia sent the court on a search through history when he wrote the first opinion upholding an individual’s right to be armed.

Until then, the 2nd Amendment had been interpreted by the court as applying to the states’ right to establish a “well-regulated militia,” rather than to an individual’s right to own guns.

But Scalia, who died in 2016, successfully argued for interpreting the Constitution based on what he viewed as the original understanding of its terms. He said the 2nd Amendment “codifies a preexisting right” that was brought from England to the American colonies.

“By the time of the founding” of this country, he wrote in District of Columbia vs. Heller, “the right to have arms had become fundamental for English subjects.”

That 5-4 decision struck down an unusually strict gun-control ordinance in Washington D.C., and held that law-abiding residents had a right to keep a handgun at home for self defense.

Now the court faces a far more consequential decision in a New York case to be heard this week: Do Americans have a right to be armed when they travel in a car, walk down the street or march in protest rally?

It is a test of gun rights as well as originalism.

One group of prominent historians recently told the court that even by using Scalia’s rationale of relying on the understood gun rights of old England, the court should conclude there is no right to carry weapons in public.

They said England had no “right to carry firearms or other dangerous weapons in public based on a generic interest in self-defense. For centuries, both English and American law have restricted individuals’ right to publicly carry arms — especially in populated places and especially in the absence of a special need for self defense — in order to preserve the public order and public peace.”

Beginning in the late 1200s, kings had issued proclamations prohibiting being armed when traveling in public or entering the city of London, the group noted.

And in 1328, the parliament adopted the statute of Northampton which said “no man great nor small … except the King’s servants in his presence” shall “go nor ride armed by night nor by day, in fairs, markets … nor in no part elsewhere” or “forfeit their armour … and their bodies to prison at the King’s pleasure.”

This statute, which stayed on the books until the mid-20th century and was adopted by several colonies in the late 1700s, has emerged at the center of the debate over the “preexisting right” that became the 2nd Amendment.

Gun-rights advocates dismiss the medieval law and say it was intended only to restrict “dangerous and unusual weapons” that would “terrify” the public. But others, including most historians, say it reflects a 700-year old tradition of restricting dangerous weapons in public places.

Saul Cornell, a historian at Fordham University, is among the leading skeptics of a broad right to arms coming from England to this country.

“They are inventing a historical tradition, not discovering one,” he said of the gun-rights advocates. “There are very few English historians who believe there is or ever was a broad fundamental right to travel armed wherever you want.”

Brown University historian Tim Harris grew up in south London and earned his degrees at Cambridge. He, too, finds it “bizarre” that Americans would look to England as a source of gun rights.

He noted the Game Acts of 1671 and 1693 restricted firearms to the landed elite who owned a substantial amount of property and were subject to poaching.

“In my view, the English legal precedents have been misunderstood and misapplied in order to try to support a more expansive interpretation of the 2nd Amendment,” he said.

New York, like California and five other states, sharply restricts who may obtain a permit to carry a concealed gun with them. Typically, gun owners are required to show they have “proper cause” or “special need” to be armed.

Those laws had been upheld for the past decade, despite the Heller decision and over dissents from Justices Clarence Thomas, Samuel A. Alito Jr. and Neil M. Gorsuch.

However, earlier this year, after Justice Amy Coney Barrett arrived, the court agreed to hear a constitutional challenge to New York’s law. It arose when two men from the Albany area sued after a county judge turned down their request for a general license to carry a handgun because they did not face “any special or unique danger.” They were given licenses to carry firearms for hunting and target shooting.

Washington attorney Paul D. Clement, a former U.S. solicitor general and Scalia clerk, represents them and the New York State Rifle & Pistol Assn.. He is urging the court to rule that the right to “bear arms” protects the right to carry a gun in public.

He cited the statute of Northampton, but says it was meant to limit only “unusual weapons,” not “ordinary arms for self-defense.”

Like Scalia, he relies heavily on the English Bill of Rights of 1689. After James II, a Catholic, had been deposed for, among other offenses, disarming Protestants in Ireland, Parliament adopted a declaration of new rights.

One said “the subjects, which are Protestants, may have arms for their defence suitable to their conditions, and as allowed by law.” Clement argues the 2nd Amendment had its “roots” here when the English established the right to have “arms for self-preservation and defense.”

Lawyers for New York portray a different history. “From the Middle Ages onward, laws on both sides of the Atlantic broadly restricted the public carrying of firearms and other deadly weapons, particularly in populous places,” they told the court.

The most thorough court opinion on the history of gun rights and the 2nd Amendment was written by Judge Jay Bybee, an appointee of President George W. Bush. In March, he spoke for a 7-4 majority of the 9th Circuit Court of Appeals and rejected the idea of a right to be armed in public.

“Our review of more than 700 years of English and American legal history reveals a strong theme: government has the power to regulate arms in the public square,” he wrote in Young vs. Hawaii.

“Indeed, we can find no general right to carry arms into the public square for self defense,” he wrote. “The contours of the government’s power to regulate arms in the public square is at least this: the government may regulate, and even prohibit, in public places—including government buildings, churches, schools, and markets — the open carrying of small arms capable of being concealed, whether they are carried concealed or openly.”

Not all the history in this case is of medieval vintage. A brief filed by retired Judge J. Michael Luttig and several top Washington lawyers urged the court to focus on the Jan. 6 insurrection by supporters of President Trump, and to imagine thousands of armed protesters descending on the Capitol.

Two days before Trump’s planned “stop the steal” rally, the police chief in Washington warned that carrying guns is illegal in the District of Columbia and would “not be tolerated.”

That warning “indisputably prevented even more bloodshed and doubtless saved many lives during the insurrection” and “may well have prevented a massacre,” they wrote.

If the court were to rule in favor of a broad right to be armed, “imagine the difficulties law enforcement would face if future protesters — whether motivated by conspiracy theories, police shootings, or anything else — arrived on the streets legally armed with loaded guns. … Adopting a right to carry,” they say, “would be to throw gasoline on the fires of our nation’s future political conflicts.”