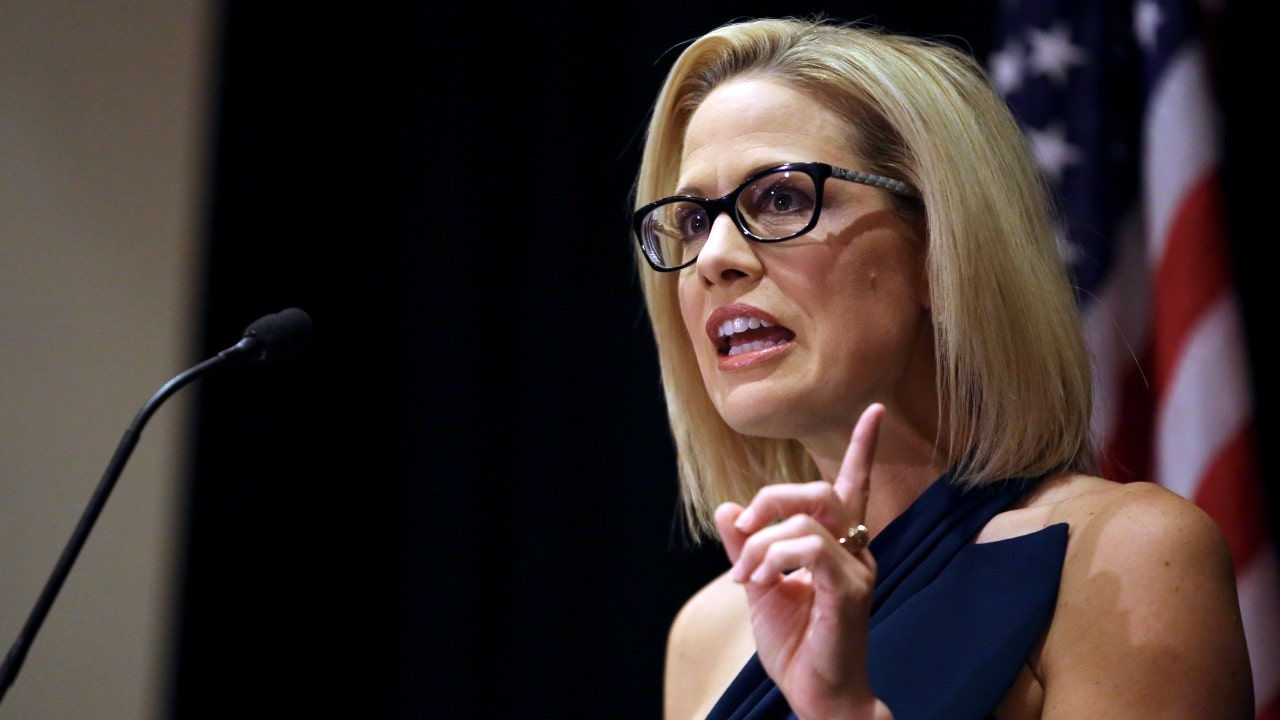 Sen. Kyrsten Sinema, D-Ariz., said in a statement Thursday that she will “move forward” with Democrats’ reconciliation bill.
(REUTERS/Caitlin O’Hara)

Sinema was widely considered the final senator needed for Democrats to pass the plan on climate, energy, health care and taxes, which, if it becomes law, will cap over a year of intra-party negotiations. With her support, Schumer said he expected all 50 Democrats to vote for the measure.

“I am pleased to report that we have reached an agreement on the Inflation Reduction Act that I believe will receive the support of the entire Senate Democratic conference,” Schumer said. “The final version of the Reconciliation bill, to be introduced on Saturday, will reflect this work and put us one step closer to enacting this historic legislation into law.”

President Biden similarly praised Senate Democrats for pushing the bill along and said he looks forward to it officially passing the chamber.

“Tonight, we’ve taken another critical step toward reducing inflation and the cost of living for America’s families,” Biden said. “The Inflation Reduction Act will help Americans save money on prescription drugs, health premiums, and much more. It will make our tax system more fair by making corporations pay a minimum tax. It will not raise taxes on those making less than $400,000, and it will reduce the deficit.”

“It also makes the largest investment in history in combating climate change and increasing energy security, creating jobs here in the U.S. and saving people money on their energy costs. I look forward to the Senate taking up this legislation and passing it as soon as possible,” he added.

Democrats plan to pass the legislation using a process called budget reconciliation, which allows them to get around the Senate’s 60-vote filibuster threshold to pass legislation on party lines. Manchin killed previous reconciliation efforts last year, at the time called “Build Back Better,” which were much more expansive than the bill he proposed with Schumer last week.

Schumer announced Thursday that the Senate will reconvene on Saturday afternoon with the plan on voting to begin debate on the bill. If all 50 Senate Democrats support the bill and remain healthy and able to vote, they will be able to pass it despite vociferous GOP objections.

Vice President Kamala Harris would be able to break ties on any 50-50 votes.

The biggest issue Republicans say they see with the bill are tax increases, the burden for which the Joint Committee on Taxation will fall indirectly on Americans in nearly all tax brackets. The increases will also hit manufacturing businesses hard, Republicans say, just after the Senate passed a bill to boost U.S. manufacturing.

The legislation is expected to spend $433 billion total, and raise $739 billion in tax revenue.

“Folks who work in these companies, and remember half this is going to fall on manufacturers, they’re gonna see their wages and benefits be reduced because of this taxation at a time when they’re having a really hard time keeping up with current inflation,” Sen. Rob Portman, R-Ohio, said.

One other hurdle Democrats are awaiting the results of is the review by Senate Parliamentarian Elizabeth MacDonough, who is currently reviewing the legislation for conformity to the Byrd Rule. That rule says reconciliation bill provisions generally must deal with taxes and government spending and cannot be straight policy prescriptions. It is not anticipated that any results from her review would doom the bill, however.

After Democrats vote to begin considering the bill, they will also have to get past a “vote-a-rama,” when senators are allowed to propose unlimited amendments to the legislation. That usually results in dozens of amendment votes in a marathon session that can last the better part of a day. But if Democrats remain united, they are in control over whether the bill passes, despite any GOP efforts.