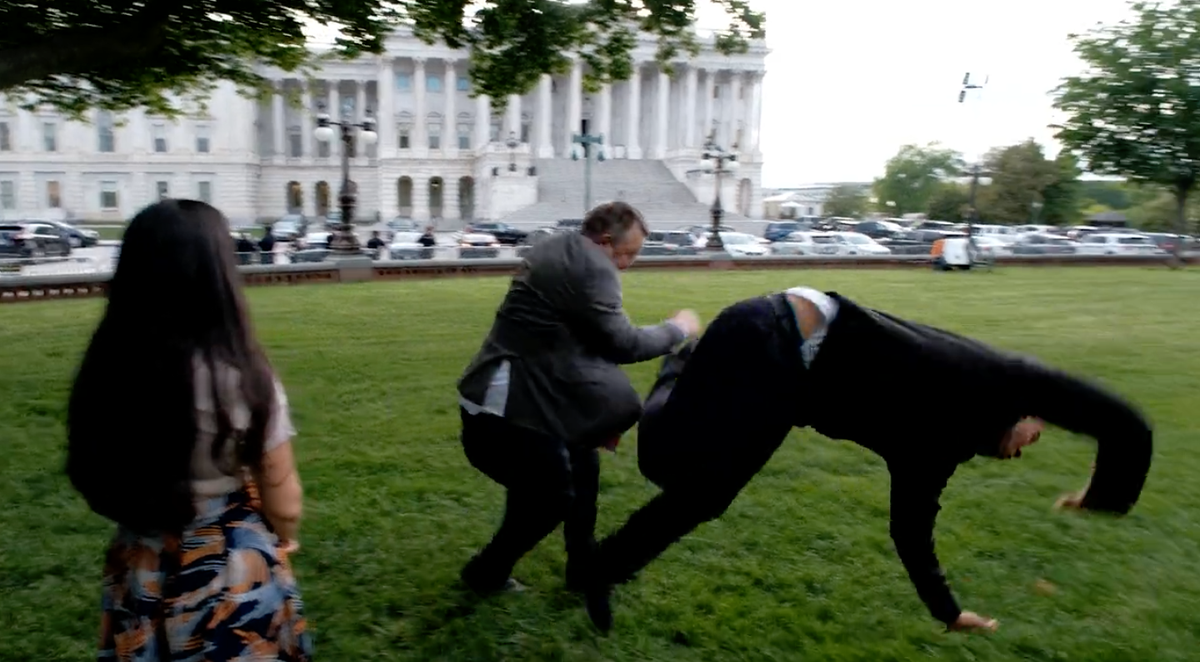 A slapstick political ad from senators Cory Booker and Jon Tester is hoping to draw focus to a topic not often discussed at the water cooler: agriculture reform.

“Consolidation in the agriculture industry is costing consumers and producers, so @SenBooker and I are teaming up to *tackle* it,” Sen Tester tweeted on Wednesday, teasing the video where he and his Democratic colleague ham it up on camera to jokingly showcase all the lengths – and friendly charges – they’re willing to take to get a bill that would place an immediate moratorium on acquisitions and mergers within the food and agriculture sector across the president’s desk.

The video opens with a grinning Senator Tester hiding behind a tree, while his Democratic colleague from New Jersey speaks with a constituent on the lawn outside the US Capitol.

The Montana Democrat then whispers, “Booker”, before charging at the New Jersey politician, who, without missing a beat, takes the slightest hit from Mr Tester and instantly flips through the air before rolling on the ground.

“Booker sells this first hit like he’s Ric Flair,” commented Twitter user Aaron Huertas, referencing the professional wrestler’s ability to use theatrics to create the illusion of taking a big charge from their opponent.

The two lawmakers are then seen jostling on the stairs towards the Capitol, before arriving in a boardroom where each of their respective communications’ teams begin admonishing them for their so-called “tackling”.

“Guys, reporters are calling. You’re tackling each other in the Capitol?” asks Dylan Laslovich, Mr Tester’s chief of staff, in the scripted ad.

Mr Laslovich’s counterpart for Mr Booker, Veronica Duron, then adds: “We’ve been through this before. You have to stop tackling each other.”

The pair of US senators then pull off what could best be described as scolded schoolboy faces, and concede that they’ll stop tackling each other, and will instead “tackle big ag consolidation”.

“Big ag consolidation is killing rural Americans,” the Montana senator acknowledges to a nodding Mr Booker, adding that the pair “need to get to work” not only the ranchers and farmers, but also the “consumers taking it at the meat counter”.

“We need to get these bills done,” Mr Tester says to Mr Booker, before one last friendly shove off-camera.

In May, alongside senators Jeff Merkley of Oregon and Elizabeth Warren of Massachusetts, the pair introduced the Food and Agribusiness Merger Moratorium and Antitrust Review Act of 2022, which seeks to help break up some of the monopolies within the food and agricultural business that currently control a lion’s share of the sector, a byproduct of rapid concentration that began taking off in the 1980s.

“Increased market concentration in the food and agricultural industry has led to disastrous consequences for family farmers and ranchers, food workers, food quality and safety, and communities,” said Sen Booker on his website introducing the bill.

As case studies, the legislation from the Democratic senators notes that in the past four decades, the top four beef packers have expanded their market share from 32 per cent to 85 per cent, while the infant formula industry has reached “alarming” levels of corporate concentration with 90 per cent of the market being controlled by four companies – Abbott, Reckitt Benckiser, Nestle and Perrigo.

Montana Senator Tester, a farmer himself, described in the same release how the consolidation of the food systems in America is “hurting rural America”.

“A lack of competition in the marketplace leads to tighter margins for American producers, higher costs for consumers, and makes our country less safe when these multinational corporations fail to perform,” he said.

In addition to the legislation seeking a moratorium on acquisitions in the food and agriculture sector, it also proposes creating a commission which would be tasked with studying and publishing possible improvements to merger enforcement and antitrust oversight in the farm and food sectors.

The bill from the Democrats arrives as Americans across the country are contending with some of the highest food prices seen in decades, while many agribusiness corporations are simultaneously hauling in record profit reports.

A companion proposal for the Senate legislation was introduced in the House of Representatives by Representative Mark Pocan of Wisconsin and both versions have been referred to the Agriculture and Judiciary Committees for consideration.