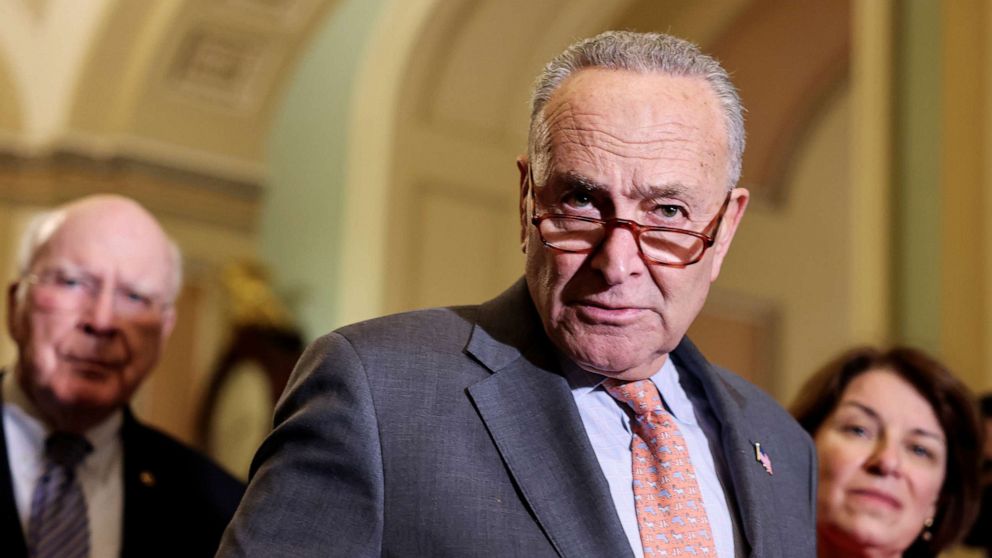 Senate Majority Leader Chuck Schumer announced Tuesday that Democrats have reached a deal on a measure aimed at lowering the cost of prescription drugs — a key part of President Joe Biden’s “Build Back Better” package.

The prescription drug measures will be included in the social spending package that Democrats have been working to find a path forwards on for months. Agreement on this issue was one of the last remaining major sticking points gumming up Democratic negotiations.

The proposed deal on prescription drugs would allow for direct government negotiation on the price of insulin and a smaller universe of drugs that are no longer protected from competition beginning in January 2022, and cap out of pocket prescription drug expenses for seniors at $2,000 annually.

“We’ve heard this from people across the country who have serious illnesses and can’t afford their medicine,” Schumer said. “What a painstaking position to be in, it’s horrible. Today we’ve taken a massive step forward in helping to alleviate that problem.”

“The Senator welcomes a new agreement on a historic, transformative Medicare drug negotiation plan that will reduce out-of-pocket costs for seniors – ensuring drug prices cannot rise faster than inflation – save taxpayer dollars, and protect innovation to ensure Arizonans and Americans continue to have access to life-saving medications, and new cures and therapeutics,” a statement from her office said.

“This has been a long time coming,” Senate Finance Committee Chair Ron Wyden — a lead negotiator — told reporters. “The prohibition against negotiation for many people has been like a curse. It defies common sense.”

Democrats, in the compromise, are also aiming to rein in future high costs of drugs by penalizing companies that raise their drug prices higher than the rate of inflation. Medicare is not, on its own, able to limit drug prices in either Part B (drugs administered by physicians) or Part D (retail prescription drugs), so lawmakers want manufacturers to pay a rebate penalty to Medicare when the price tag of a drug rises faster than inflation.

AARP also supports the deal, and urged lawmakers to act swiftly to make it a reality.

“Allowing Medicare to finally negotiate drug prices is a big win for seniors,” their statement read. “Preventing prices from rising faster than inflation and adding a hard out-of-pocket cap to Part D will provide real relief for seniors with the highest drug costs.”

But while Democratic lawmakers celebrate their agreement on prescription drugs, there remains a precarious path forward for the overall bill in the Senate .

Though the House is expected to vote on Biden’s economic agenda and a separate bipartisan infrastructure bill with the support of progressives as soon as this week, the Senate is an open question, with one moderate Democrat seemingly more entrenched in his opposition with each passing day.

Sen. Joe Manchin, D-W.Va., said Tuesday that he opposes several key provisions in the unfinished bill, including an expansion of Medicaid to include hearing aids for seniors.

“I’m not for any expansion that has a trust fund that is insolvent,” Manchin said Tuesday. He is also concerned about the cost of the bill and its potential impact on inflation.

Although Biden announced Thursday, before departing for an international climate summit, that “we have a framework that will get 50 votes in the United States Senate,” Democrats may have been well aware of the objections Manchin is now making.

On Tuesday, Manchin denied having ever endorsed the Biden framework. He said the White House was well aware of his position.

“No,” Manchin said when asked by ABC News Congressional Correspondent Rachel Scott if he had signed off on Biden’s framework. “That would mean this isn’t genuine,” he said, referencing his ongoing concerns.

But without Manchin’s support, in the evenly divided Senate, the spending bill doesn’t stand a chance. He’s threatened to withhold his support entirely.

Manchin scoffed at claims from members of his own party that he had thrown Biden a curveball while he was on the world stage, arguing that he was always clear he wanted a vote on the infrastructure package.

“I feel basically it’s time to do something. The president’s over there, he went there, he asked for something before he left and everyone ignored it,” Manchin said. “I didn’t ignore it. I thought of something that could have been done. It was very easy ask: Just vote for the bipartisan infrastructure bill.”

Progressives have for weeks said that they would withhold support for the bipartisan infrastructure deal until they had total assurance that Biden’s Build Back Better plan would include their key priorities and get the necessary support from Senate Democrats.

But they’ve come off their position and are readying for a vote on both the infrastructure bill and the build back better agenda as soon as this week. That would leave the social spending bill to return to the Senate, where it could be modified.

Rep. Pramila Jayapal, who chairs the Congressional Progressive Caucus, pointed to Biden’s promise that Senate Democrats will provide the necessary votes to pass social spending, and said her conference will trust the Biden to make good on his word.

Biden said in a news conference on Tuesday in Glasgow that he was confident Manchin will eventually support the deal.

“I believe that Joe will be there,” Biden said.