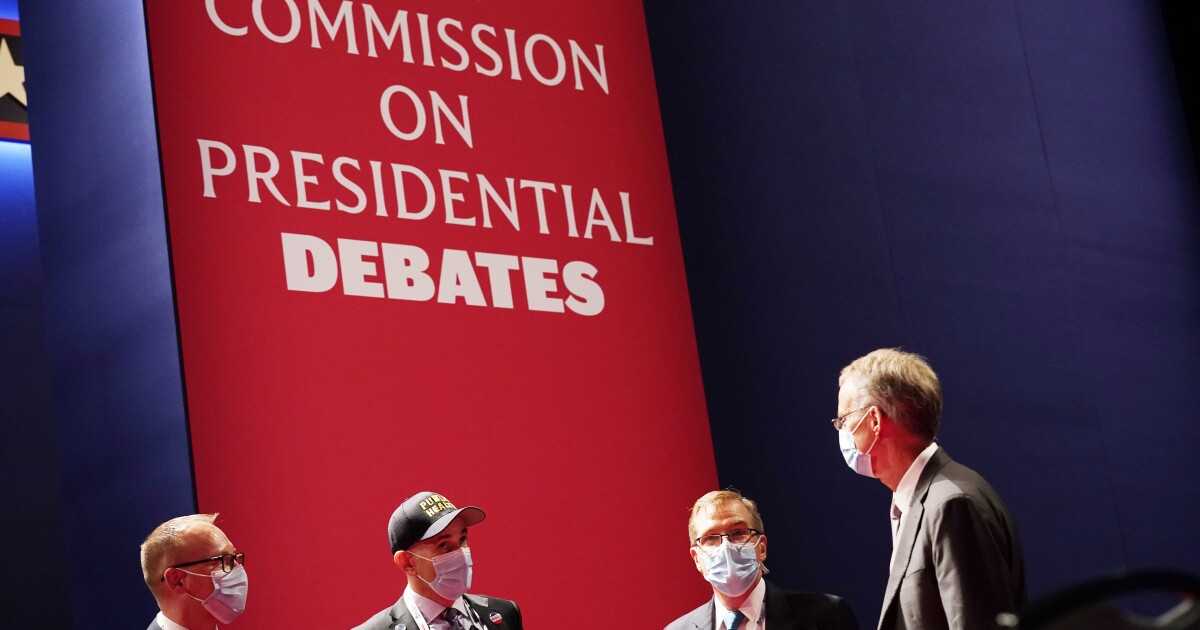 The Republican National Committee said Thursday it is planning a rules change that would force presidential candidates seeking the party’s nomination to sign a pledge saying they will not participate in any debates sponsored by the Commission on Presidential Debates.

If enacted and enforced, the move would fundamentally change the way presidential elections have been conducted in the country for more than 30 years. The threat is a culmination of years of tension between the RNC and the nonprofit that was exacerbated by former President Trump, who repeatedly accused the commission of unfair treatment. Trump ultimately refused to participate in the second 2020 debate because he objected to it being held virtually because of the pandemic.

In a letter to the commission first reported by the New York Times and obtained by the Associated Press, RNC Chair Ronna McDaniel voiced frustration with the CPD’s response to a long list of complaints, including concerns about its selection of moderators, a desire for a debate before early voting starts and a push for changes to the commission’s board.

“The RNC has shared our concerns with the CPD in good faith, carefully documenting why the party and its voters have lost faith in your organization, and we have proposed commonsense reforms that would restore trust in the debates process,” she wrote. “Unfortunately, neither the tone nor substance of your latest response inspires confidence that the CPD will meaningfully address the serious issues which the RNC has raised.

“Accordingly,” she wrote, “the RNC will initiate the process of amending the Rules of the Republican Party at our upcoming Winter Meeting to prohibit future Republican nominees from participating in CPD-sponsored debates.” The meeting will take place next month.

The commission said in a statement that it deals directly with candidates who qualify for participation in its debates.

“The CPD’s plans for 2024 will be based on fairness, neutrality and a firm commitment to help the American public learn about the candidates and the issues,” it said.

In a Dec. 14 letter to McDaniel, the commission said it always reviews its operations between election cycles and said that process was underway. As part of the review, the group’s co-chairs said they planned to study the impact of early voting and evaluate the moderator selection process. But they rejected an RNC proposal to allow representatives from both parties to attend CPD board meetings, saying that would violate the group’s status as a nonpartisan organization.

“We take the RNC’s observations and suggestions seriously and, as we have said previously, we will give them careful consideration,” they wrote, adding, “In furtherance of our position as a nonpartisan, neutral body, which neither favors nor disfavors any party or candidate, we do not negotiate the terms or conditions of our operations with anyone.”

It remains unclear what would take the debates’ place if the Republican candidate were to boycott. The televised events provide voters with their only opportunity to see the candidates appear side by side, and force those running to weigh in on a wide variety of domestic and foreign policy topics.

RNC spokesperson Danielle Alvarez said the party is seeking a potential alternative debate partner. Primary debates are not sponsored by the committee.

While the RNC has the ability to change many party rules between its quadrennial conventions, final say on whether to participate in the commission-sponsored debates will fall on the GOP’s eventual 2024 nominee. The nominee usually effectively controls the convention, which could easily strip the rule drafted by party insiders if the nominee believes it is in their interest to attend the debates.

The commission was established in 1987 “to ensure, for the benefit of the American electorate, that general election debates between or among the leading candidates for the offices of President and Vice President of the United States are a permanent part of the electoral process,” the nonprofit writes on its website.

After the 2012 presidential cycle, the RNC took on a more formal role in the primary debate process, including sponsoring debates in partnership with selected media outlets. As a condition of participation, candidates for the nomination had to agree not to attend any unsanctioned debates.

After CNBC’s hosting of an October 2015 debate drew criticism from the candidates for poor management and “gotcha” questions designed to instigate clashes between the candidates, the RNC announced that it would ban NBC and its affiliates from hosting primary debates going forward.

Before the 2020 presidential debates, the RNC and the Trump campaign worked in public and behind the scenes to influence the selection of the debate hosts. Still, Trump voiced complaints that selected moderators were biased against him, repeatedly threated boycotts and ultimately refused to participate in the second general election debate.

Trump is considering another run for the White House in 2024.

Jaime Harrison, chair of the Democratic National Committee, accused the RNC in a statement of trying to “hide their ideas and candidates from voters.”

“Regardless of the RNC’s tantrum, voters can count on hearing from President Biden and Vice President Harris who are proud of their records,” he said.