Republicans Block a Second Voting Rights Bill in the Senate 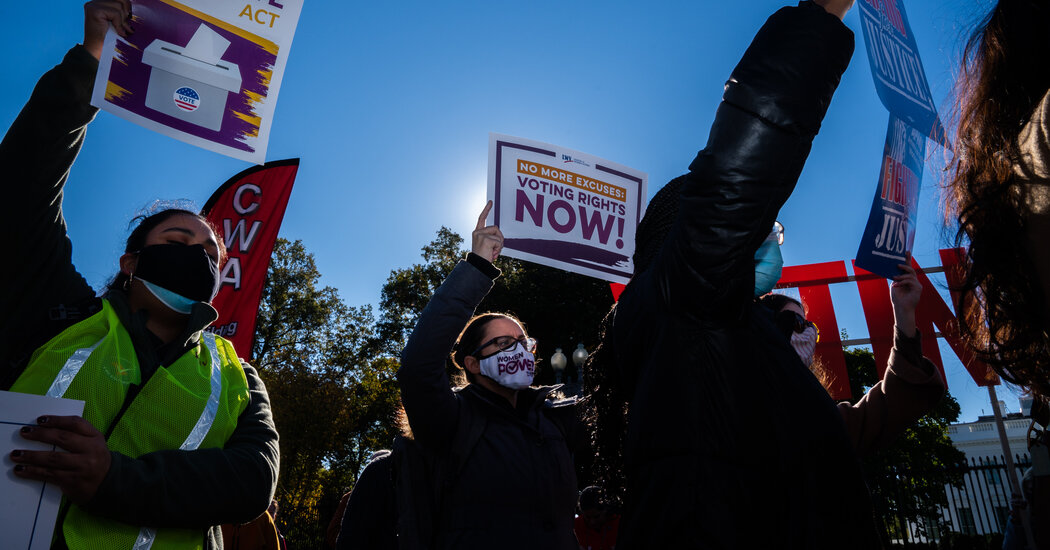 WASHINGTON — Senate Republicans on Wednesday blocked legislation to restore parts of the landmark Voting Rights Act weakened by Supreme Court rulings, making it the second major voting bill to be derailed by a G.O.P. filibuster in the past two weeks.

In the aftermath of the defeat, Senate Democrats said they would intensify internal discussions about altering filibuster rules or making other changes to allow them to move forward on voting rights legislation despite deep resistance by Republicans, who have now thwarted four efforts to take up such measures.

“Just because Republicans will not join us doesn’t mean Democrats will stop fighting,” said Senator Chuck Schumer, Democrat of New York and the majority leader, after the vote. “We will continue to fight for voting rights and find an alternative path forward.”

Before the vote, according to a senior Democratic aide, Mr. Schumer convened a meeting with moderate Democratic senators to strategize over their next moves on voting rights and how to proceed with “family discussions” to find a way around the Republican opposition. Those attending included Democratic Senators Tim Kaine of Virginia and Jon Tester of Montana, and Angus King, independent of Maine. Mr. Schumer has also been consulting with civil rights leaders.

In a statement after the Republicans thwarted action on the bill, President Biden implored them to “let there be a debate and let there be a vote.”

The measure blocked on Wednesday is aimed at reinvigorating voting protections against discrimination at the ballot box that have been struck down by the Supreme Court.

A major goal of the bill is to again require jurisdictions with a history of discrimination to win prior approval — or “preclearance” — from the Justice Department or federal courts in Washington before changing their voting rules. The Supreme Court invalidated that requirement in its 2013 decision in Shelby County v. Holder. The bill also seeks to bolster safeguards against discriminatory election practices that were limited this year by the court’s ruling in Brnovich v. Democratic National Committee.

“We wouldn’t be dealing with some of these terrible, draconian measures in Georgia right now if preclearance were on the books,” said Senator Raphael Warnock, a Democrat. He was referring to his home state, which has seen new voting restrictions imposed by Republicans after his victory in January and President Biden’s win in November. “And so, let’s get this done.”

Considered the crown jewel of civil rights legislation, the Voting Rights Act traditionally enjoyed broad bipartisan support after its enactment in 1965 and was renewed under a succession of Republican presidents, most recently in 2006 on a Senate vote of 98 to 0. But just one Republican senator, Lisa Murkowski of Alaska, joined all 50 Democrats in voting to open debate on a compromise measure that also has the support of Senator Joe Manchin III, Democrat of West Virginia, who helped negotiate the new version.

“Nothing is more fundamental than the right to vote,” Ms. Murkowski said Wednesday before the vote. She urged lawmakers to put aside differences to try to work on consensus legislation that would maintain public trust in the election process.

“Let’s stop the show votes but give ourselves the space to work cooperatively across the aisle,” she said. The measure incorporates provisions intended to improve ballot access for Native Americans, an important constituency for Ms. Murkowski.

The John Lewis measure is distinct from an earlier voting rights measure, the Freedom to Vote Act, which Republicans have thrice thwarted through filibusters, most recently in October. That measure set new voting standards meant to counter Republican-led efforts around the country to impose voting restrictions that Democrats regard as efforts to limit voting in minority communities. No Republican supported bringing that measure to the floor.

“The Freedom to Vote Act puts the fire out in this 911 state of emergency in our democracy,” Mr. Warnock said. “The John Lewis Voting Rights Advancement Act is about building a fire station for future fires.”

Top Republicans, though, portray both measures as unnecessary and say they represent an effort by Democrats in Washington to set election parameters to their advantage. They argue that the Supreme Court eliminated only the parts of the Voting Rights Act that it considered outdated.

Senator John Cornyn, Republican of Texas, on Wednesday said there had been “huge improvements and advances made in minority voting strength.”

The Mississippi abortion case. The court is poised to use a challenge to a Mississippi law that bars most abortions after 15 weeks to undermine and perhaps overturn Roe v. Wade, the 1973 decision that established a constitutional right to abortion.

A major decision on guns. The justices will consider the constitutionality of a longstanding New York law that imposes strict limits on carrying guns in public. The court has not issued a major Second Amendment ruling in more than a decade.

Senator Mitch McConnell, the Kentucky Republican and minority leader, said that Democrats were trying to give Attorney General Merrick B. Garland pre-emptive authority over voting law changes that should be the purview of state and local governments.

“Americans don’t need Attorney General Garland ruling over their states’ and their counties’ elections any more than they need congressional Democrats doing it themselves,” said Mr. McConnell said. He noted that the underlying Voting Rights Act remains intact and can be enforced in cases where discrimination is determined.

Democrats were well aware that they were likely to again hit a Republican wall on voting rights. But part of their calculation has been to demonstrate to Mr. Manchin, who has been deeply involved in crafting both measures, that Republicans are determined to obstruct the bills, making a change in filibuster rules the only route to enacting the measures. Mr. Manchin has expressed deep reservations about tinkering with the filibuster, which he says fosters bipartisanship.

Top Democrats say they cannot stand by and let minority Republicans shelve measures that are fundamental to protecting the right to vote. Mr. Schumer said that by their opposition, Republicans were implicitly endorsing voter suppression efforts by those he called “the heirs to Jim Crow.”

“At some point, our democracy has to move along,” said Senator Amy Klobuchar, Democrat of Minnesota and chairman of the Rules Committee. “And that’s the discussion we’ll be having.”

Senator Patty Murray of Washington, the No. 3 Senate Democrat, was more blunt.

“If it means an exemption to the filibuster, then I believe we should do it,” she said. “We cannot let a Senate procedure stop us from protecting the right to vote in the United States of America.”

In his statement, Mr. Biden did not mention the filibuster, but suggested that voting rights had a special status and that protecting them was paramount.

“The right to vote is sacred and constitutional,” he said. “It’s fundamental to all other rights. The soul of America is at stake.”