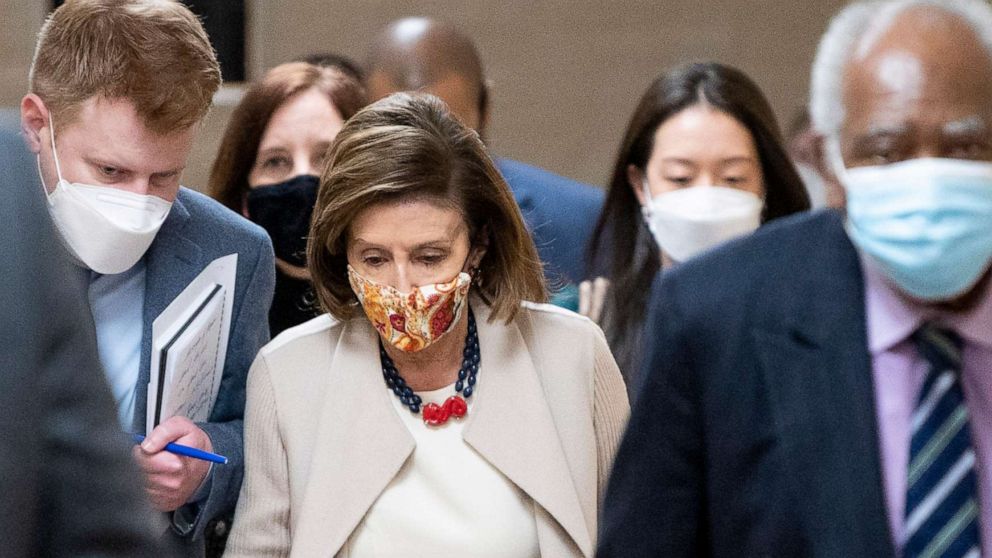 As House Democrats scramble to move forward with President Joe Biden’s landmark infrastructure and social spending legislation, Speaker Nancy Pelosi on Thursday told her deputies behind closed doors that she wants votes on the bills this week — but publicly she declined to commit to any specific timetable.

“I’ll let you know as soon as I wish to,” Pelosi told reporters during her weekly news conference when asked about scheduling what’s become an elusive target for her party.

Congressional Democrats are under new pressure to pass the legislation following Tuesday’s disappointing election results and Biden telling reporters on Wednesday his message to them was: “Get it on my desk.”

“We have to have the votes,” Pelosi said Thursday, indicating her leadership team is still working the numbers behind the scenes.

Pelosi said she was “very unhappy” about missing her previous Oct. 31 deadline for passing the already Senate-passed bipartisan infrastructure bill, stalled as progressives held their votes to continue negotiations on a larger social spending package.

“Did you see the whip count?” Pelosi asked reporters on Thursday. “Because I’ll tell you something about Mr. Clyburn, he keeps it close to the vest.”

Asked if it were possible that she would put only the bipartisan infrastructure bill — or “BIF” — on the floor if the social spending plan or “Build Back Better” bill isn’t ready, Pelosi told reporters: “No.”

“We’re going to pass both bills, but in order to do so we have to have the votes for both bills, and that’s where we are,” she added.

Notably, Pelosi says she does not call votes in the House if she knows she doesn’t have the votes to win.

In an earlier closed-door meeting, Pelosi told her deputies that if the votes are there, they intend to vote on the social spending bill as soon as Thursday night, with votes on the bipartisan infrastructure plan planned for Friday, sources familiar confirmed to ABC News.

“Hopefully we’ll see if we have the votes for BBB tonight and BIF tomorrow morning,” she said, according to a source familiar with the matter.

But there are still several loose ends with the larger social spending or “Build Back Better” package Democrats plan to pass through reconciliation, a process not requiring Republican support but would need all Democratic votes in the Senate — where its fate is unclear with Sen. Joe Manchin, D-W.Va., having objected to a late addition.

Pelosi announced on Wednesday that Democrats were adding four weeks of paid family and medical leave back to the social spending package, to the praise of progressives, but a move which Manchin said he doesn’t support, raising concerns with the cost.

ABC News Congressional Correspondent Rachel Scott asked Pelosi what her message is to Manchin, who says he supports paid family leave but not in this package, and Pelosi took an optimistic tone.

“Well, I don’t make a habit of talking to Senator Manchin on the TV. We’re friends. I respect him. He’s a good person. He’s agreed to so much that is in the bill,” Pelosi responded.

“With all the respect in the world for the point of view he represents, I disagree,” she said of his position. “I think that this is appropriate for this legislation. It fits very comfortably with childcare, health care, home care, family medical need, and it has the full support of our caucus.”

Asked by reporters if House Democrats’ inability to pass the legislation ahead of Tuesday’s governor race in Virginia impacted that loss for Democrats, Pelosi said she would have to wait and see the data.

“But I do think as the American people learn more about what we are doing in this legislation for families, for children, for women in the workforce, to save our planet, the rest, it will be very positive. You can’t deny that it would be very positive,” she said. “There’s no question if we the more results we can produce in a way that is people understand in their lives, the better it is,” she added.

Democratic leaders are actively whipping behind the scenes to see if the votes are there and argue to moderates that the social spending plan, expected to cost about $1.75 trillion, will be fully paid for.

The Joint Committee on Taxation said in its latest analysis released Thursday that the new tax provisions included in the social spending plan would raise nearly $1.5 trillion over 10 years — meaning the plan nearly meets Democrats’ mark.

JCT’s latest score does not include revenue raised by providing the IRS more money for enforcement or savings from prescription drug pricing changes since those provisions were added in just the last two days.

House Ways and Means Committee Chairman Richard Neal, D-Mass., also told reporters the JCT score indicates that the bill will be fully paid for when the tax increase, IRS and drug pricing provisions are all taken into account.