Pandemic spurs young families to leave big cities for the heartland. Will they stay? 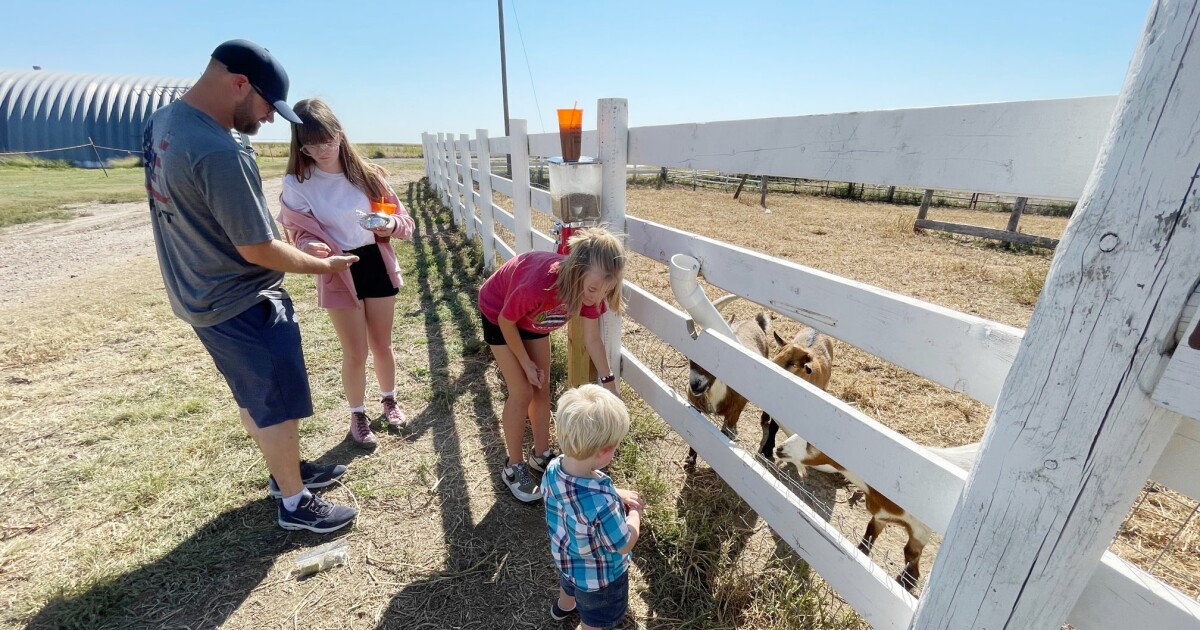 Fed up with pandemic restrictions and their cramped studio apartment in Burbank, Patrick and Emma Janssen upped stakes and moved back to their native Nebraska last fall.

At first, Emma, 36, taught writing to her Caltech students remotely, then switched to teaching at a Nebraska school.

Thirty-eight-year-old Patrick left a flagging career as an actor and landed a new job with a Nebraska news channel.

Now, a year on and a shivering Great Plains winter behind them, the Janssens are expanding the three-bedroom house they bought next door to Emma’s parents in the 135-year-old farming town of Winside, population just over 400.

The new house cost about one-tenth of a typical Burbank house, and they have more yard space than they know what to do with.

“Our first thought was, well, we’ll give it a year, and then probably come back to L.A.,” said Patrick, whose parents and brother also live in Nebraska. “But then we got here, and we kind of realized that wasn’t the case…. We’re here for the long haul.”

For generations of young people reared in the nation’s heartland, it has been almost a rite of passage: Grow up in a small town, finish school, head out for the opportunities of cities like Los Angeles, New York and Chicago. It’s been a major factor in the aging populations and declining economies of rural communities.

But the pandemic may be reversing — or at least slowing — that trend as many people reassess their priorities. Just as critically, the COVID-19 health crisis has opened up more telework opportunities, making life more feasible for those wanting to live in smaller states and towns.

Smaller cities such as Topeka, Kan., and Stillwater, Okla., are wasting no time capitalizing on new employment prospects, offering thousands of dollars in cash for new residents moving into their areas for work.

Iowa, Nebraska, West Virginia and other states have launched an assortment of grants and other inducements aimed at enticing people to work there, especially in rural communities.

“We’re not only trying to keep our youth and college graduates in Kansas, but also reengaging with those from the Midwest,” said Trent Armbrust, chief strategy officer at the Kansas Department of Commerce.

“We’re saying: Come on home. Come back. You’ve got family here. You know the lifestyle. And there are now opportunities that you can have a great family life and a great career in Kansas.”

To be sure, it’s still a hard sell to keep young people from leaving for the relative abundance of jobs and livelier, more diverse offerings in big cities. And even if land is cheaper and more plentiful, the shortage of good housing is a major challenge in rural America.

Colby, a town of 5,500 in northwest Kansas, has made every effort to create an environment that would appeal to young people. It built an aquatic center, expanded hiking trails and opened a new events center.

But when several people were offered jobs at a local hospital and area schools in the last year, they ended up declining the positions after being unable to find suitable housing, said Vernon Hurd, executive director at Thomas County Economic Development Alliance.

The problem could get worse, he fears, as people live longer and choose to forgo nursing facilities. Construction hasn’t kept up, either. “We’re all in the same boat,” Hurd said of rural America.

Also, wireless connectivity — deemed essential by younger Americans and taken for granted in major urban areas — can be spotty in sparsely populated areas, creating another obstacle for rural communities.

Patrick Janssen was initially hesitant about Nebraska. Partly, he said, it felt like an admission that he couldn’t handle the stress and competition of life in a larger city. But he was also concerned that Winside didn’t have adequate broadband to support his and his wife’s planned careers. It was only after he received assurances from the local utility that the Janssens fully committed to the move.

One lasting change expected from the pandemic is a far greater willingness on the part of employers to allow and accommodate working from home.

This summer the share of remote openings posted on the jobs site Indeed was nearly triple that of two years earlier. By some surveys, the percentage of office workers working mainly from home could easily reach 30%.

How big a game changer that turns out to be for smaller communities remains to be seen. But without it, Dayton Daberkow, his wife, Whitney, and their four young children couldn’t have made the move from central St. Paul, Minn., to Wahoo, Neb., in June.

The couple, now in their mid-30s, grew up in Nebraska, and both have parents and other family in the state.

Dayton works as a salesman for a large food company, which he said was “pretty welcoming, pretty receptive” to his desire to telework permanently. It was then that he pinpointed Wahoo, population 4,500, which is about equidistant from his parents and hers.

“The pandemic was very isolating, so it distanced us from some of our friends, and schools became a real challenge,” he said.

“Our twins did distance learning. That was not a fun experience. We had two first-graders sitting at the dining table trying to do first-grade academics over Zoom while at the time a 4-year-old and a 1-year-old kind of ran around the house. Going through experiences like that, you just start to appreciate having family close by to help.”

Many returnees have either family or school connections. Michelle Mel McNierney and her husband, Jason, had neither. They had never even heard of a tiny Nebraska town of 725 called Bertrand before they visited and moved there in June.

Both are Colorado natives, but over the years the couple had become disenchanted with living in Denver. They saw it as getting too crowded and less friendly. The McNierneys began taking road trips, and Bertrand was one of the stops.

“We just showed up with our three kids [ages 2 to 13] and our dogs, and everybody is like, ‘Hey, do you need anything? Want some snacks?’ It was just this big difference,” said Michelle, 35, who is opening a yoga studio in Bertrand, backed by as much as $22,000 in county grants for upgrading the downtown facility.

Demographers say it’s possible the pandemic has given a spur to domestic migration, which has been slowing for years as the population ages and young adults in cities haven’t moved as much to suburbs and other locales.

But experts doubt there’ll be a broad change in attitudes, or that thousands of dollars in cash will have much effect in luring people away from cities.

“How much can you pay someone to change their lifestyle?” says William Frey, a demographer at the Brookings Institution.

Since early in the pandemic, Anna Lucas and her husband, Carlos Marin, have been talking about the possibility of leaving Los Angeles and returning to Iowa, where they were born, grew up, met and married. They still have parents and relatives scattered in the state.

Anna, 31, and Carlos, 35, went to the University of Iowa and are part of the Iowa Club of Los Angeles, which has some 5,000 members who meet regularly at Barney’s Beanery in Santa Monica to watch Hawkeye football games and reminisce about life in Iowa.

Over the last 18 months of the pandemic, Anna says, several of her friends in Los Angeles have moved out, some to the Midwest, and one taking off for a life of “nomadic remote work.”

Anna says her work as an applied psychology researcher could be done remotely, so she’s waiting to see whether the telework trend sticks. But there’s much more that’s holding her back from leaving.

“My reluctance is just ‘going back,’” she said. Growing up in Iowa “provided a wonderful foundation, but also the past 10 years the country has been in a time of change.

“I just have concerns, from my perspective, that it’s become more conservative,” she said. “There’s a spirit of openness here, and acceptance of difference, and an appreciation of that…. I remember when we first arrived in October five years ago, and came to the beach and watching the sunset and feeling all the pressure relieved, and thinking, ‘This is our new home.’”