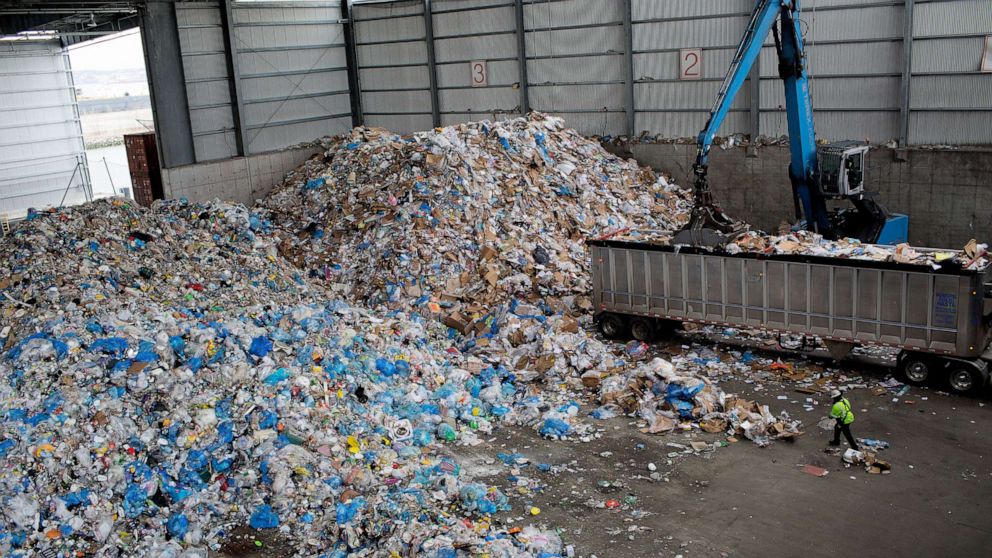 OGUNQUIT, Maine — In the cold autumn rain, as residents of this seaside resort town sort their paper, plastic and aluminum into community dumpsters, Steve Twombly uses a fishing net affixed to a six-foot-pole to scoop out recyclable misfits and debris that belongs in the trash.

“I have to fish out enough so that the percentage is so low that they will accept the load,” Twombly said as he scanned a sea of plastic bottles inside the town’s waste transfer station.

Americans are eager to recycle more of their waste than ever before. Manufacturers are ravenous for a steady stream of materials to turn into new products.

But a growing flood of non-recyclable packaging, coupled with major market disruptions overseas, is threatening the sustainability of municipal recycling programs nationwide and the environmental benefits that help counter climate change, experts say.

Ogunquit recently had to cut back on recycling services after China — once the largest buyer of America’s waste — stopped taking most recyclables, leaving many American communities in the lurch.

“It was cheaper to throw it in the trash than to send it out as recyclable,” said John Fusco, manager of Ogunquit’s waste program. “People were very frustrated — and still are to this day. As long as this stuff keeps coming, there’ll be a cost to it. So the more of it there is, the higher the budgets will be.”

More than 82 million tons of solid waste produced in the U.S. is from containers and packaging, according to the Environmental Protection Agency. Roughly half of that is recycled; the rest is sent to landfills or burned.

Cities rely on the sale of recyclable materials to domestic and international manufacturers to help offset the cost of collecting and disposing of household and commercial waste.

“Some people want to do what we call ‘wish recycling.’ They want to recycle everything, but not everything is recyclable,” said Kevin Roche, CEO of Ecomaine, a non-profit waste management company, who wants more manufacturers to utilize readily recyclable materials in their products.

Reusing materials also results in fewer greenhouse gas emissions than would be produced in the extraction and fabrication of new raw materials. In addition, recycling limits the amount of waste sent to landfills, where decomposing debris gives off highly potent methane gas.

“Right now, taxpayers are shouldering the burden for managing the waste, but they have no say over what the packaging is made out of, or how much of it there is,” said Maine state representative Nicole Grohowski, who sponsored a first-of-its-kind law requiring manufacturers to cover the cost of recycling the packaging they create.

“I like to call it recycling reform,” Grohowski told ABC News in an interview outside the state capitol in Augusta. “It makes the producers of packaging waste responsible for what happens to that waste at the end of its lifespan.”

Makers of anything that’s bottled, boxed or even canned will soon be charged a fee based on the amount of packaging they use and how easily it’s recycled. The idea is to encourage the use of more readily recyclable materials and help cities foot the bill of processing them.

Maine was the first state to enact such a law, followed by Oregon, which implemented a similar policy this year. At least six other states are considering extended producer responsibility legislation. Environmental advocates say the approach could be a gamechanger for America’s waste system.

“This type of policy already exists all over the world,” said Sarah Nichols, a waste policy expert at the Natural Resources Council of Maine. “There are some countries in Europe that have been doing this for over 30 years. So we know there’s data to show that our recycling rate is likely to double as a result of this.”

“Unless the government does something about the problem with all this packaging and waste ending up in the landfills, it’s going to keep ending up in landfills,” said Rob Tod, owner and founder of Allagash Brewing Company in Portland, Maine.

Tod was initially skeptical of the state’s extended producer responsibility law, but now says he supports payments for the roughly 50,000 pounds of packaging his company uses every year.

“It’s not huge,” he said of the expected annual fee of several thousand dollars. “I think if we’re thoughtful and creative we’re going to be able to offset some of those expenses.”

Dozens of major manufacturers, including Unilever, Coca-Cola, Walmart and H&M have all backed the new Maine law and others like it. But some retailers remain deeply concerned about the impact.

“Businesses are unsure of the administrative requirements and what ultimately it will cost them to have to participate in the program,” said Christine Cummings, executive director of the Maine Grocers and Food Producers Association.

“There is also the potential there could be higher prices for consumers because of this,” she said.

Grohowski was skeptical of analyses suggesting the law would boost prices of average consumer goods, noting that the per item cost of a recycling fee would be negligible.

“I really hope it can be a model for the nation,” she said. “It’s exciting to see that Oregon followed not far behind us…. We need to create a sustainable recycling system that works.”

As world leaders debate systemic solutions to climate change at the COP26 summit in Scotland, scientists say individual citizens and environmentally-conscious businesses can play a role on a daily basis by simply using more readily recyclable materials and then delivering them to a robust recycling program.

After more than twenty years in the waste industry, John Fusco in Ogunquit says he’s optimistic the new approach will help sustain his local recycling program — and keep paying dividends for the environment.

“I am charged with the responsibility of managing this mess and the costs,” he said. “It should be a shared cost. The hope, for me, with this law is that it gets people on all levels trying to make it work for everybody.”