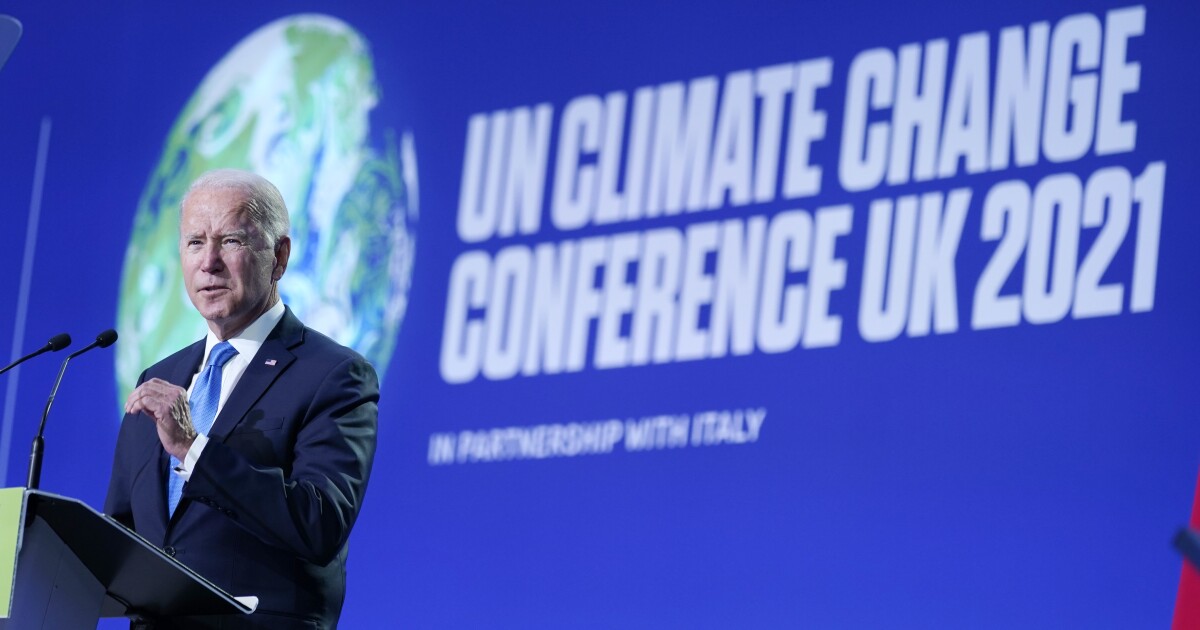 With global leaders unable to reach consensus on how to quickly curb rising temperatures, President Biden sought other avenues of progress on his last day at the U.N. climate summit, forging narrower agreements to cut methane emissions and save the world’s forests.

The patchwork of announcements generated a flurry of positive headlines Tuesday, despite environmental advocates’ doubts that the convention will provide the momentum necessary to halt climate change before its deadly effects ravage more parts of the globe.

During a news conference held shortly before he left the summit, Biden hailed the progress he and other leaders had made but acknowledged “we’ve got a lot more to do.”

“There’s a reason for people to be worried,” the president said. “I’m worried if we don’t continue to move forward and make the kind of progress we’re now making, we throw into jeopardy the prospect that we’re going to be able to keep the temperature from rising above 1.5 degrees Celsius.”

World leaders announced Tuesday that nearly 100 countries had joined a global pledge to limit emissions of methane, a planet-warming gas more potent as a polluter than carbon dioxide.

They signed a pact to prevent further deforestation by 2030 — a promise that Britain hailed as the summit’s first major achievement, but that experts said would be difficult to accomplish.

And leaders hinted that wealthy countries might be closer to fulfilling their promise of providing $100 billion a year in aid to help poor countries adapt to climate change and transition to cleaner sources of energy.

The summit will continue for 10 more days but without most countries’ top representatives.

Before the summit began, British Prime Minister Boris Johnson described the fight against climate change as a soccer game in which humanity was losing 5-1. On Tuesday, he said humanity has scored a goal or two since then, and “I think we’re going to be able to take this thing to extra time.”

“There’s no doubt that some progress has been made,” he said during a news conference.

But with the leaders of China and Russia, two of the top polluting countries, absent from the conference and refusing to accelerate their plans to reduce greenhouse gas emissions, the stated goal of preventing average temperatures from rising more than 1.5 degrees Celsius remained only a symbolic gesture. Beyond that threshold, scientists say, heat waves will become deadlier, wildfires more frequent and floods more damaging. Some parts of the world, including much of the Arctic, have already surpassed 1.5 degrees, with catastrophic consequences.

“We showed up. And by showing up, we’ve had a profound impact,” Biden said. “They’ve lost the ability to influence people around the world and people here” at the summit.

He later added: “How do you do that and claim to be able to have any leadership now?”

Other countries that the U.S. had hoped to pressure into accelerating their transitions away from fossil fuels offered only distant promises.

Indian Prime Minister Narendra Modi announced that his country would become carbon neutral by 2070, missing by about 20 years the summit’s goal of zeroing out carbon emissions by midcentury. Modi’s country is the third-largest emitter of greenhouse gases in the world.

Shortly before the conference, Saudi Crown Prince Mohammed bin Salman set a new carbon neutrality date of 2060. And Australia’s prime minister, Scott Morrison, announced his country would reach net zero emissions by 2050 but set no more ambitious goals for 2030. This earned the ire of Britain’s climate change advisor, who told a BBC panel that this commitment had been “squeezed out of” Morrison but was so vague as to be meaningless.

U.S. climate envoy John F. Kerry has repeatedly stressed over the last two days that the talks in Glasgow are not final and that opportunities remain to correct course. Negotiations with the biggest polluters around accelerating the transition away from fossil fuels will continue, he said.

David Victor, a professor of innovation and public policy at the School of Global Policy and Strategy at UC San Diego, said China’s “general disengagement” from the summit does not bode well for these or future talks.

He said it’s “pretty hard to make progress on collective action when the world’s two biggest economies don’t get along with each other.”

Given the geopolitical divides, Victor said, initiatives such as the methane pledge may become more common and productive avenues for reducing emissions.

“It’s about working sector by sector in small groups to demonstrate progress through changing facts on the ground and then making it easier for the rest of the world to follow,” he said.
Environmental advocates praised the international methane agreement Tuesday as one of the fastest ways to lower average temperatures relatively quickly.

Scientists have estimated that methane is responsible for about one-third of human-caused global warming, or 0.5 degree of the nearly 1.1 degrees Celsius of warming that has taken place since the late 19th century. The pledge, brokered by the U.S. and the European Union, commits nations to cut emissions from methane by at least one-third by 2030.

As part of that commitment, Biden and Ursula von der Leyen, president of the European Commission, announced plans to strictly curtail emissions from the oil and gas industry, the leading source of industrial methane emissions.

Biden also held an event Tuesday with Johnson and Von der Leyen to promote an international effort to finance infrastructure investments in poorer countries. Called Build Back Better World, or B3W, the initiative is intended to be an alternative to China’s Belt and Road initiative, which has funded the construction of coal-fired power plants, highways and rail lines in developing countries and increased Beijing’s influence.

The meeting served as a reminder of how Biden has tried to increase pressure on China during this conference and throughout his presidency.

He promised to work closely with other countries — an implicit reference to how China has been viewed as a predatory lender in developing nations — and said that “democracy is still the best way for delivering results.”

Could that new federal gun safety law have prevented the July 4 parade shooting?