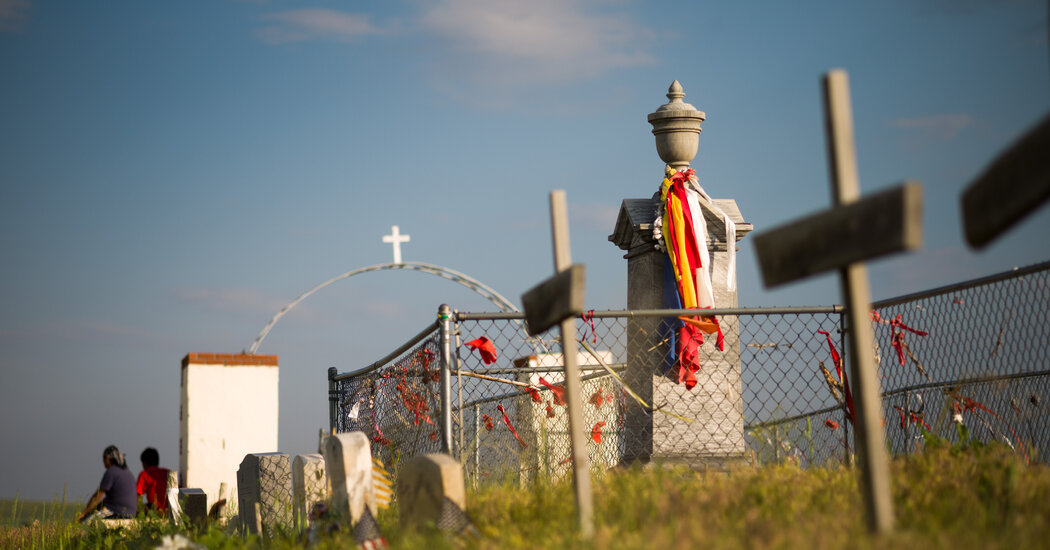 More than a dozen members of Congress have called on President Biden to use his executive authority to revoke Medals of Honor awarded for the killings of members of the Lakota Sioux tribe, including unarmed women and children, at Wounded Knee, S.D., in the 19th century.

In a letter coordinated by Senator Elizabeth Warren, Democrat of Massachusetts, 16 Democrats and Senator Bernie Sanders of Vermont, an independent, called the awards “a persistent shame on the nation.” While a bill to rescind the awards appears stalled, the lawmakers said they believed it was within Mr. Biden’s authority “to confer with the secretary of defense and the secretaries of the military departments and revoke these honors when appropriate.”

“For the families and descendants of those massacred, the revocation of these 20 Medals of Honor would have a profound and lasting impact — as has the federal government’s ongoing choice to allow these wrongly bestowed honors to stand,” the lawmakers wrote in the letter, which was sent Tuesday.

On Dec. 29, 1890, along Wounded Knee Creek on the Pine Ridge Reservation in the southwest corner of South Dakota, U.S. Army soldiers killed hundreds of unarmed members of the Lakota Sioux tribe, including many women and children.

That day, U.S. soldiers intercepted Chief Big Foot, leader of the Minneconjou Lakota, and his people on their way to the Pine Ridge Reservation. After the Lakota surrendered, the soldiers led them to an encampment. As the soldiers were disarming the Lakota, a shot was fired, and then the soldiers attacked.

The massacre marked one of the bloodiest acts of violence against Native Americans by federal forces, and it was the last armed conflict between them.

In its aftermath, the government looked into the conduct of the troops of the Seventh Cavalry — and decided to award the medals, the nation’s highest military commendation, to the soldiers involved.

Many of the award citations noted “gallant conduct in battle” and “distinguished” or “conspicuous” bravery, with few details to justify those characterizations.

Earlier this year, the South Dakota State Senate passed a resolution calling for Congress to investigate the awarding of the medals. Congress formally apologized for the massacre in 1990.

Some of those who signed the letter also took part in a legislative push earlier this year. Ms. Warren; Senator Jeff Merkley, a Democrat from Oregon; and Representative Kai Kahele, Democrat of Hawaii, led the reintroduction of the Remove the Stain Act, a bill that would revoke Medals of Honor from 20 United States soldiers who took part in the massacre at Wounded Knee. The bill was read twice and referred to the Committee on Armed Services.

“The atrocities against unarmed Lakota men, women, and children at Wounded Knee should be condemned, not glorified with our nation’s highest military honor. Congress should pass the Remove the Stain Act to right this wrong against Native peoples, but the President can and should also use his authority to revoke these wrongly conferred medals,” Ms. Warren said.