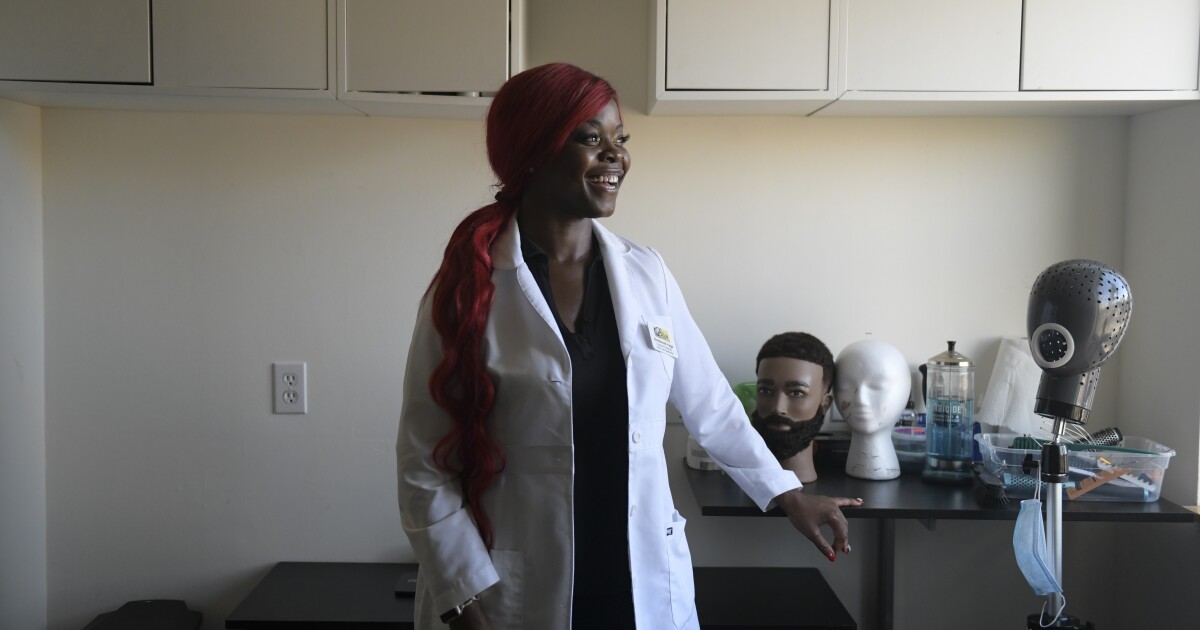 Christine Paige, a hairdresser and wigmaker, was confused and a little suspicious when she got a text purporting to be from the White House asking if she would participate in an event with Vice President Kamala Harris.

Could this be real? Paige wasn’t sure. But after talking with a confidant, she decided to call back. Maybe Harris wanted her hair done, Paige thought, just as Cardi B did a few years ago when she came to Providence.

But Harris didn’t need a blow-out. Her office wanted Paige to take one of five seats in a “women-led small business roundtable” Harris was hosting with Commerce Secretary Gina Raimondo, the former Rhode Island governor.

“I had like 48 hours to prepare,” Paige recalled, recounting the rush to get a coronavirus test, re-dye her wig, get a manicure, buy a new business suit and gather advice from her mentors.

People in Washington don’t think much about roundtables, unless they go sideways. They are the carrot sticks on the hummus plate, seldom objectionable but hardly exciting. Designed to approximate real conversation — often with politically popular small-business owners — they provide politicians a public forum that feels safe and controlled.

Paige, though, remembers each of the 60 minutes she spent with Harris. They changed her life in unexpected ways that show how, in an era when the definition of celebrity is looser than ever, fame can be experienced in micro-doses. Paige, after her moment, is trying to leverage it for more.

It’s no coincidence that Harris extended the invite.

She is the reigning roundtable knight in Washington, holding at least 27 since taking office in January, according to a Times analysis of her publicly released schedule. She has hosted one with “supply chain thought leaders,” one on “STEM education” and another “as part of the Task Force on Worker Organizing and Empowerment.” She has held them in the White House, New Jersey, Singapore, twice in Guatemala.

They are, most of the time, the ultimate vice presidential event — attracting enough local news coverage to promote the president’s agenda but not so much news that they spark unintended national controversy.

Harris’ September visit to a university classroom in Virginia, though not officially a roundtable, illustrated the potential perils of such encounters. Harris refrained from pushing back against a student who accused Israel of “ethnic genocide.” Then Harris and her aides spent several days reassuring pro-Israel Democrats and organizations that she did not agree with the student.

The White House official responsible for recruiting roundtable participants, who was not permitted to be quoted by name, said he relies on referrals from advocacy groups and local and state officials as well as Google searches to find people with personal stories that relate to the issues Harris seeks to highlight.

Paige was picked with help from Raimondo’s office, which solicited a list of graduates of a small-business training program run by the Goldman Sachs Foundation and the Community College of Rhode Island.

The White House official said the administration does not tell people what to say: “Our job is to make sure they are comfortable telling their own story,” sometimes a deeply personal one, while sitting beside the vice president of the United States and news cameras capturing every moment.

On a rainy Wednesday in early May, Paige entered a small auditorium inside the Providence Innovation Center for her big moment. She looked confident wearing a wavy crimson wig — she calls the rich color she created “wine” — and a sparkling black mask. But then, a moment of panic.

The other four women seated at a semicircle of tables had brought notes, arranged in large binders in front of them. Paige had nothing written down, not even a napkin with talking points. Just a glass of water, a paper name card and a tiny purse.

“Is Kamala Harris going to take me serious because I don’t have a notepad?” she recalled, laughing.

A showcase for compelling storytelling from the Los Angeles Times.

Harris did not arrive until an hour after Paige was seated and then sat directly beside her, socially distanced for safety, without much warning. “I was actually fiddling with my phone,” Paige said. “I damn near dropped my phone.”

Paige said she was not told to write a speech — only that she discuss the challenges of owning a small business during the COVID-19 pandemic.

She knew that story well. She had a hair salon on Federal Hill, a well-known Italian American neighborhood in Providence. She said she stood out as a Black woman who cut hair for patrons of all races.

But she wanted something bigger and bolder, so she had signed a lease on a larger facility that would have space for more employees who could do makeup, tattoos and other cosmetic services. She scheduled a grand closing party for her old business on March 14, 2020 — the day after then-President Trump declared COVID-19 a national emergency.

“The first couple days, I can admit, I cried like a baby because I just felt like my business was gone,” she told the roundtable. “How can I service people six feet away? How can I do hair?”

Paige said divine intervention, along with reassurance from her grown sons and mentors, helped her chart a new plan: a hair replacement business in which she could make wigs from human hair for cancer patients and others who have lost their hair. She found office space across the street from the hospital where she was born and got the word out.

“Yeah, it’s an amazing story, but that’s the beginning of how I started to get through the pandemic,” she said as Harris looked on. “I said, ‘If this thing comes my way, it’s going to have to make a U-turn and go somewhere else.’”

Paige hit all the notes — the emotional punch from COVID, the American sense of hopefulness in the rebound. She said later that she felt a chill through her body when she admitted to crying when her expansion plans appeared dashed. She couldn’t believe she was exposing her vulnerability like that, “but it felt right” in the moment, and she knew others would relate.

In the mundane world of political roundtables, she had proved herself.

Raimondo called it “a story of strength,” while Harris pronounced all five women “inspiring.”

As Harris headed out the door, she paused to take a picture with the group and Paige made sure to get a spot right next to the vice president again and then jokingly called her “Auntie Kamala,” eliciting an approving giggle.

Gary Spellman, one of Paige’s mentors and the owner of a national company called Ultimate Face Cosmetics, wasn’t surprised Paige is appealing to politicians. He hired Paige as an instructor after she went to one of the Paul Mitchell beauty schools, a national chain that has training partnership with his company.

He called her “a hustler” in a good way, scrappy and determined.

Paige said she was seven months pregnant and holding down two jobs — at a department store and a concession stand at a sports arena — when she graduated high school in 1999. No one in her large family had ever owned a business. Paige had drive, plowing past a couple of false starts before opening her downtown salon in 2014.

The key, according to Spellman, is that Paige is “coachable.” Through his work, Spellman is often around politicians and celebrities, and knows “there’s a lot of ego involved.” Throw into that mix someone who’s uncoachable, he said, and “you’re going to have a disaster on your hands.”

The roundtable made the local news, and Paige soon felt the effect. People recognized her at Walmart. Her Instagram following grew to more than 10,000, about double what it was, she said.

She felt momentum. She was asked to appear at another small-business roundtable with Rhode Island’s lieutenant governor, this one organized by the Goldman Sachs training program. Then she got a call from an advocacy group seeking universal paid leave: Would she join a bus tour at the Rhode Island State House and tell her story alongside a congressman?

Paige was in demand for something she didn’t know existed — a regular person who can illustrate a political argument. But where can that lead?

Her sister Tasha Bleu, who doubles as her photographer and marketing consultant, said she told Paige that it was a chance to rebrand herself: “This is the time to focus on you and tell your story properly.”

Now that her cycle of roundtables is apparently over, Paige doesn’t have to worry about stepping on other people’s egos. Her office, Instagram account and website showcase huge pictures of her with the vice president.

When a Times reporter came to visit her in Rhode Island, she offered to set up photographs and asked what the headline would be. The visit coincided with Bleu shooting promotional photos of her — with wardrobe and wig changes — at the city’s botanical garden and in front of the dramatic State House building.

“2022 is definitely going to be about her and telling her story and showing her face more,” Bleu said.

Paige, who turned 40 a month after she met Harris, agreed. She said she might run for Providence City Council, though probably not for a decade. In the meantime, she is fully onboard with the rebrand.

Talking to the second-most powerful person in the country changed her view of what was possible. It showed, she said, that she could have broader reach, “without even trying.”

“All of the sudden, I got all of this attention,” she continued. “So I said, ‘You know what, it’s definitely time to do some rebranding, put together a shoot. Let’s — I don’t want to say capitalize, you know — let’s ride this moment and make sure that people are seeing us in the best light and in a new light.’”

At the botanical garden, Paige became the director of her own story. She sang between shots. She pointed to the palm tree she wanted to stand under and raised her hands and swung her fiery red wig across her powder blue power dress.

“Then, I’m going to do my famous pose,” she announced.

She raised one foot in the air, put her hand on her hip and turned to her side to face the camera. Her sister kept snapping photos.