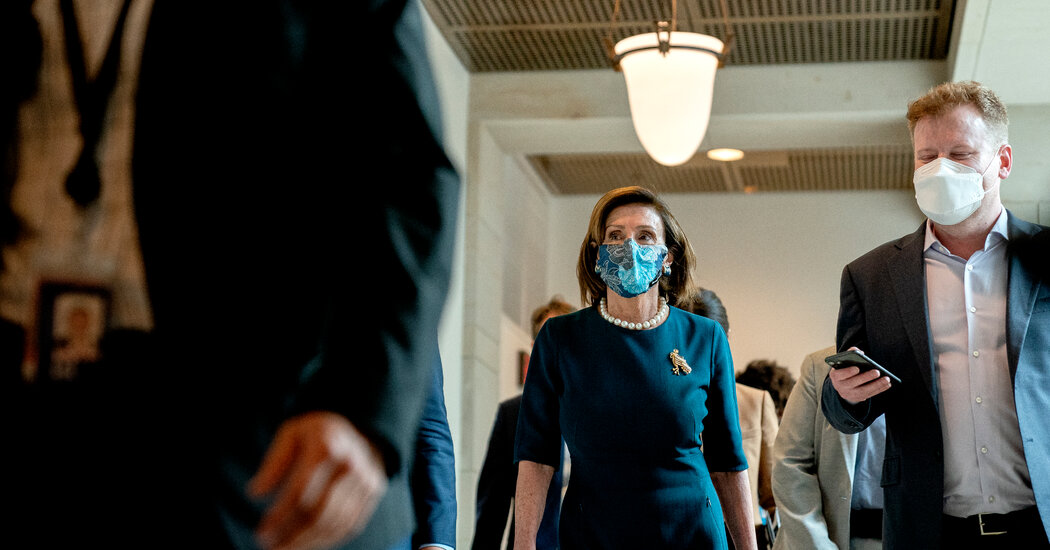 WASHINGTON — Speaker Nancy Pelosi of California announced on Wednesday that she would include four weeks of federal paid family and medical leave in the $1.85 trillion domestic policy bill that the House plans to consider as early as Thursday, seeking to pressure Senator Joe Manchin III of West Virginia to drop his opposition.

The announcement, which came as Democrats scrambled to iron out differences over the package, is unlikely to result in enactment of the leave program. Mr. Manchin, a crucial Democratic holdout, reiterated on Wednesday that he would not support it as part of the sprawling social policy, climate and tax legislation. But the inclusion of paid leave promised to give House Democrats a chance to register their support for a program that has bipartisan backing.

It also all but guaranteed that the legislation would have to be modified by the Senate and approved a second time by the House before it becomes law, breaking with Ms. Pelosi’s promise to moderate lawmakers that she would not force them to vote on a plan that could not clear the evenly divided Senate.

The speaker’s move amounted to the most direct challenge yet of Mr. Manchin, a centrist who has repeatedly voiced concern that the social safety net bill is overly generous, and whose objections have effectively compelled Democratic leaders to either curtail or remove a number of provisions.

In a letter to Democrats on Wednesday, Ms. Pelosi acknowledged that she had been “informed by a senator of opposition to a few of the priorities contained in our bill” and stressed that a compromise would be needed for the final package to become law.

While several Democrats celebrated Ms. Pelosi’s decision, Mr. Manchin made clear that he would not back down from his opposition. Because Republicans are unanimously opposed to the entire package, Democrats must maintain the support of all but a few of their members in the House and all 50 senators who caucus with their party for it to pass.

“I’m for paid leave,” Mr. Manchin told reporters at the Capitol after Ms. Pelosi’s announcement. He added that he did not believe Congress should be “putting that in a bill that we should be able to work in a bipartisan way to get done.”

President Biden and congressional Democrats had hoped to include 12 weeks of paid leave in their package, but they scaled it back to four amid opposition from Mr. Manchin before ultimately dropping it altogether. Mr. Biden did not include it in a compromise framework that he presented last week, and House Democrats left it out of a draft bill they produced the same day.

It was included in a list of final changes to the House bill, which the Rules Committee released on Wednesday afternoon. The program would begin in 2024, includes all employed and self-employed workers and can be used for family caregiving or personal illness.

Ms. Pelosi’s decision came a day after five moderate and conservative Democrats reiterated to her in a letter that they did not want to vote for a package that lacked the guaranteed support of all 50 Senate Democrats or might run afoul of the strict budget rules that apply to the plan. The legislation is being considered under a process known as budget reconciliation, which shields it from a filibuster but tightly limits what can be included.

Still, for proponents of the paid leave program — predominately women in both chambers — the decision to include it was welcomed, even if it was unlikely to become law.

“This victory is personal for so many American workers and their families, and it is personal for me,” said Representative Rosa DeLauro, Democrat of Connecticut and a longtime champion of the proposal. She held an emotional meeting with staff members who had helped craft the provision and a tearful call with Christopher J. Dodd, who had fought for a similar federal program as a Democratic senator when she served as his chief of staff in the 1980s, according to an aide.

Representative Richard E. Neal, Democrat of Massachusetts and the chairman of the Ways and Means Committee, vowed “to do whatever is necessary to get this provision signed into law by President Biden and give the American people the basic support they deserve.”

Top Democrats hoped it would buoy a lobbying campaign to change Mr. Manchin’s mind. Senators Kirsten Gillibrand of New York and Patty Murray of Washington have cornered him repeatedly in recent days to plead for his support for including paid leave in the bill.

The campaign also gained an unlikely ally: Meghan, the Duchess of Sussex. The former actress from the United States, who married Prince Harry in 2018, has emailed Ms. Murray and called multiple senators in both parties to push for the provision, according to people familiar with her outreach.

“Much to my surprise, she called me on my private line and introduced herself as the Duchess of Sussex,” said Senator Susan Collins, Republican of Maine. “She just weighed in that she thought paid leave was really important, and I told her there were a lot of different approaches, and people were working on it.”

Ms. Collins, who said she had also spoken to Mr. Manchin about a possible bipartisan solution, added that “I was happy to talk with her, but I’m more interested in what people from Maine are telling me about paid leave.”