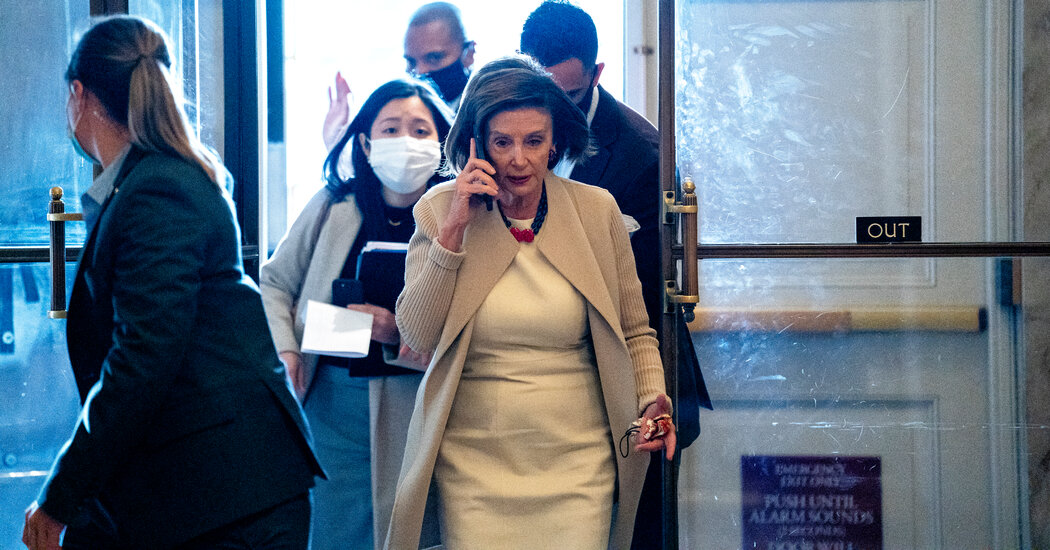 WASHINGTON — House Democrats struggled on Thursday to line up the votes needed to push through a $1.85 trillion social safety net, climate and tax bill, as moderates raised concerns about the cost and details of the rapidly evolving plan.

Speaker Nancy Pelosi of California privately told her top deputies that she hoped to hold a vote on the bill as soon as Thursday night, with another on Friday morning to clear a Senate-passed $1 trillion bipartisan infrastructure measure for President Biden’s signature, according to two people briefed on the discussions.

But as of midday Thursday, she was publicly noncommittal.

“I will let you know as soon as I wish to,” Ms. Pelosi told reporters at her weekly news conference. She ruled out the possibility of voting first on the infrastructure bill, which liberals have refused to support unless it moves in tandem with the more expansive domestic policy measure.

“We’re going to pass both bills,” Ms. Pelosi said. “But in order to do so, we have to have votes for both bills.”

It was unclear whether that would be possible, given that some centrists were balking at passing the social policy bill — which includes monthly payments to families with children, universal prekindergarten, a four-week paid family and medical leave program, health care subsidies and a broad array of climate change initiatives — before evaluating its fiscal impact.

They were also concerned about supporting policies — such as a provision to grant legal status to some undocumented immigrants — that were likely to face a tough path in the Senate, subjecting them to a politically difficult vote on a measure that would never become law.

The two bills, which carry a majority of Mr. Biden’s economic agenda, have been in limbo for weeks as Democrats tussle over the details. Centrist holdouts led by Senator Joe Manchin III of West Virginia are demanding that the social safety net measure be scaled back to about half the $3.5 trillion that leaders had initially proposed.

While the Senate approved the $1 trillion infrastructure bill in August, the measure has stalled as progressives have repeatedly refused to supply their votes for it until there is agreement on the other bill.

House Democrats are now holding out hope of passing both measures this week, sending the infrastructure bill to Mr. Biden and the social safety net legislation to the Senate, where Democrats plan to begin work on it the week of Nov. 15.

“Passing transformative legislation is not easy — it’s hard, very hard,” said Senator Chuck Schumer of New York, the majority leader. “But the long hours we are putting in, the discussions we have had, some of them quite pointed, will be worth it.”

With Republicans unanimously opposed, Democrats are pushing the social policy and climate measure through Congress under a special process known as reconciliation that shields budget-related legislation from a filibuster and allows it to pass on a simple majority. But with slim margins of control, Democrats need the votes of each of their senators and all but a few of their members in the House to pass the bill.

That means that any single Democratic defector — or a small group of them in the House — can effectively torpedo the legislation.

In a letter this week, five Democrats — including Representatives Stephanie Murphy of Florida, Josh Gottheimer of New Jersey and Jared Golden of Maine — urged Ms. Pelosi to grant them at least 72 hours to review the text of the reconciliation bill and wait for a full analysis from congressional scorekeepers confirming that the bill was fully paid for.

“It is better to get this done right than to needlessly rush its consideration only for our constituents to discover the negative impacts of our unintended consequences,” the lawmakers wrote.

The Joint Committee on Taxation released a report on Thursday that estimated that the tax increases in the bill would raise about $1.5 trillion over a decade. But a separate nonpartisan agency, the Congressional Budget Office, has yet to publish a formal analysis of how much the bill would spend or how much revenue would be generated by other proposals, including a plan to lower the cost of prescription drugs and beef up the I.R.S.’s ability to collect unpaid taxes.

Ms. Pelosi and her deputies stressed that much of the legislation has been public, after two months of committee hearings, private talks and drafts. Her office and White House officials circulated separate, preliminary estimates that found that the bill was fully paid for and would help reduce the deficit, a key priority for many moderates.

“By making our tax system more fair and asking the highest-income earners and big corporations to pay what they owe, Congress has put together a package that is fiscally responsible and critical to the future prosperity of our economy,” Treasury Secretary Janet L. Yellen said in a statement.

But in the latest 2,135-page version of the bill, Democratic leaders also added proposals — including the paid leave program, which Mr. Manchin opposes, and a plan to grant temporary protected status and work permits to undocumented immigrants — that might ultimately have to be jettisoned by the Senate.

That has also frustrated conservative Democrats, who initially extracted a promise from Ms. Pelosi that she would not ask them to vote on a package that did not have a commitment from all 50 senators.