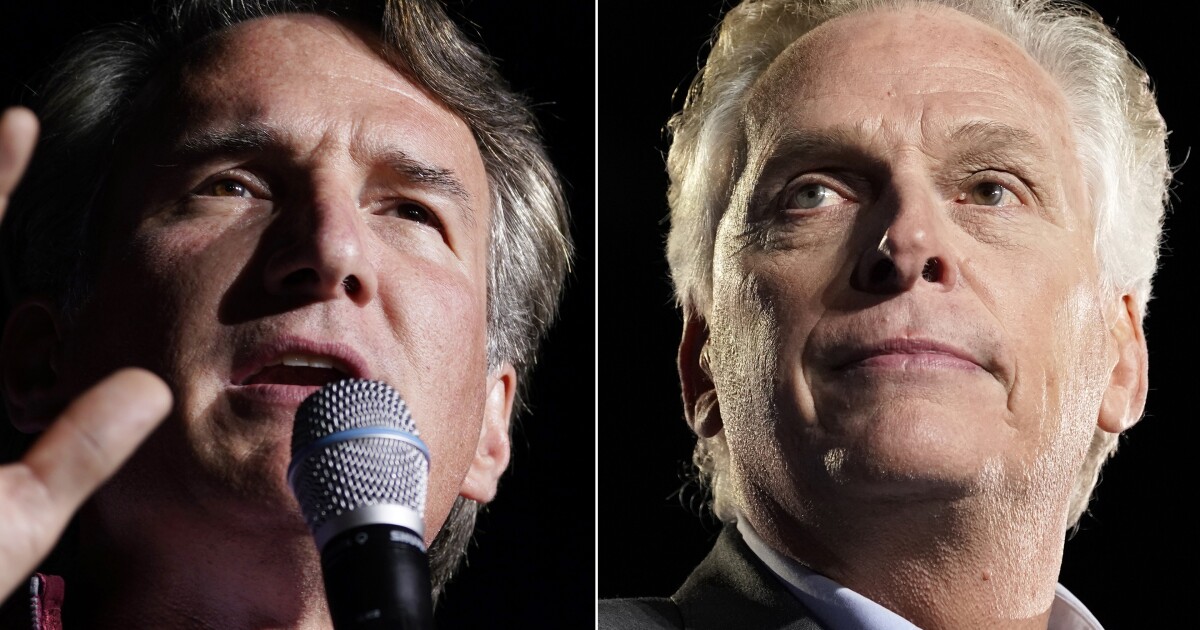 Republican businessman Glenn Youngkin will be the next governor in Virginia, according to the Associated Press, clinching victory in a state that went solidly blue in last year’s presidential election and fueling the GOP’s hopes to retake control of Congress in the 2022 midterm election.

Youngkin was declared the winner Tuesday, marking a major turnaround after he spent much of the campaign trailing his opponent, former Democratic Gov. Terry McAuliffe, in the polls. His ascent — powered by massive margins in rural areas and solid showings in blue suburbs — underscores the grim political environment for Democrats and increases the pressure on President Biden to secure as-yet elusive wins on his legislative agenda.

Furthering liberal angst, Democratic New Jersey Gov. Phil Murphy barely eked out a win over his Republican challenger, Jack Ciattarelli, despite expectations he would win fairly easily. The AP declared Murphy the winner Wednesday after more ballots were counted in blue counties and he took a lead of about 19,000 votes.

The notable GOP swing in both of this year’s gubernatorial races shows the gains are not confined to just one state.

But it was Virginia that had commanded widespread attention in recent weeks. A political novice and former co-chief executive of the private equity firm the Carlyle Group, Youngkin is the first Republican in 12 years to win statewide office and may offer a template for other GOP campaigns next year. Running on a platform focused on schools and the economy, Youngkin managed to slough off McAuliffe’s attempts to make this race a referendum on Donald Trump, without alienating the former president’s most dogged supporters.

Here’s how Youngkin did it, and other important dynamics in this race.

To Trump or not to Trump? That’s been the question for every Republican since 2016 who has had to balance the former president’s fervent base with his toxicity among suburban voters and other key groups. Youngkin’s strategy was to avoid firmly choosing one or the other.

Youngkin, 54, did not bring up Trump much on the campaign trail — despite Trump’s own desire to be injected into the race and McAuliffe’s ceaseless effort to link the two Republicans. It was an understandable choice in a state where Biden had won by 10 points just last year.

“Between 2016 and 2020, Virginians took every opportunity to vote against Trump,” said Bob Holsworth, a longtime political analyst in the state. “He’s very unpopular here, especially in northern Virginia.”

But Youngkin did not go out of his way to renounce Trumpism either. He called for voting machine audits, playing into the false narrative that the 2020 election was fraudulent, and railed against critical race theory — an academic framework on institutional racism that is not taught in the state’s primary schools but has emerged as a culture war issue, igniting Republicans across the country. The result was a campaign that managed to keep Trump voters turning out enthusiastically without galvanizing an anti-Trump backlash.

McAuliffe, 64, underperformed relative to Biden in suburban areas such as Loudoun County, a sign that a Trump-centric message has limits to its effectiveness.

Voters typically had given Democrats the edge when it came to education. But Youngkin’s focus on public schools put McAuliffe and his party on the defensive, potentially signaling how potent the topic may be for Republicans next year.

Youngkin’s mantra was “parents matter,” appealing to voters who want more say in how topics such as race and gender identity are taught in their children’s schools. Virginia, especially the wealthy Washington suburb of Loudoun County, has seen volatile clashes at school board meetings over policies regarding transgender students and critical race theory, or CRT, which has morphed beyond its original definition to become a catchall term for some parents and conservative activists about how schools discuss racism and equity.

The issue clearly resonates with Republicans — CRT is an oft-mentioned topic in conservative media — and Youngkin bet it would also bring along independents or even Biden voters. Democrats expressed skepticism that the topic had traction beyond the right-wing base. But Republicans clearly succeeded in elevating the issue; a Washington Post poll conducted the week before election day showed that education had surged to the top concern for all likely voters, and they were evenly divided between trusting Youngkin and McAuliffe.

Youngkin also capitalized on lingering discontent over prolonged pandemic school closures last year in parts of affluent northern Virginia such as Fairfax County. That enabled him to focus not just on the “issue of the culture warrior right,” said Chris Stirewalt, former political editor for Fox News, but also more straightforward proposals to boost teacher pay.

“He was saying to persuadable voters of northern Virginia and suburban Richmond that the Democrats failed on the state level in Virginia and [he] can address this in a normal, practical way,” said Stirewalt, a senior fellow at the American Enterprise Institute, a conservative think tank.

State campaigns don’t occur in a vacuum, especially in the country’s hyperpolarized political climate. And the external forces bearing down on McAuliffe were, in a word, brutal. Biden’s poll numbers have slumped since late summer, dragged down by the uncertain fate of his legislative agenda, the chaotic withdrawal from Afghanistan, supply-chain issues and inflation, and the ongoing COVID-19 pandemic — and those woes spilled over into Virginia.

“There’s almost a direct line: As Biden’s numbers started going down with independents, McAuliffe’s [did] as well,” Holsworth said.

Youngkin, meanwhile, has benefited from both independents’ discontent with Biden and a fired-up Republican base that was hungry for a win. And without Trump on the ballot, the voters who had broken decisively against the GOP during his presidency swung away from Democrats. Tuesday’s results show that Virginia’s status as solidly Democratic territory may have been a temporary reaction to Trumpism, not a permanent political realignment.

“I continue to believe that Virginia is still purple, not solid blue,” said Mark Rozell, professor of political science at George Mason University.

The commonwealth as a crystal ball

The midterm election is a year away — a lifetime in politics — so why were campaign junkies watching this race so closely? For one thing, much of the political press corps lives just across the Potomac in Washington. For another, it’s one of only two gubernatorial elections this year, so there’s little competition for attention.

Moreover, Virginia’s gubernatorial races have a decent track record in foreshadowing the next year’s battle for Congress and statehouses. In 1993, for example, Republican George Allen won a commanding victory after once trailing his Democratic opponent by 29 points in the polls; the next year, the Newt Gingrich-led Republican “revolution” handed control of Congress to the GOP. In 2017, Ralph Northam’s win signaled the coming wave in 2018 in which the Democrats recaptured the House.

Gubernatorial races in the state have largely followed the law of political gravity that the party that holds the White House faces rough prospects in the midterm. For decades, Virginia voters have picked a governor who hails from the opposite party of the president. The only exception was McAuliffe, who won his first bid for governor in 2013, after the reelection of President Obama, a fellow Democrat.

The fact that McAuliffe couldn’t defy history again should worry Democrats nationwide, said John Couvillon, a Republican pollster, who has been assiduously following the race from his home state of Louisiana.