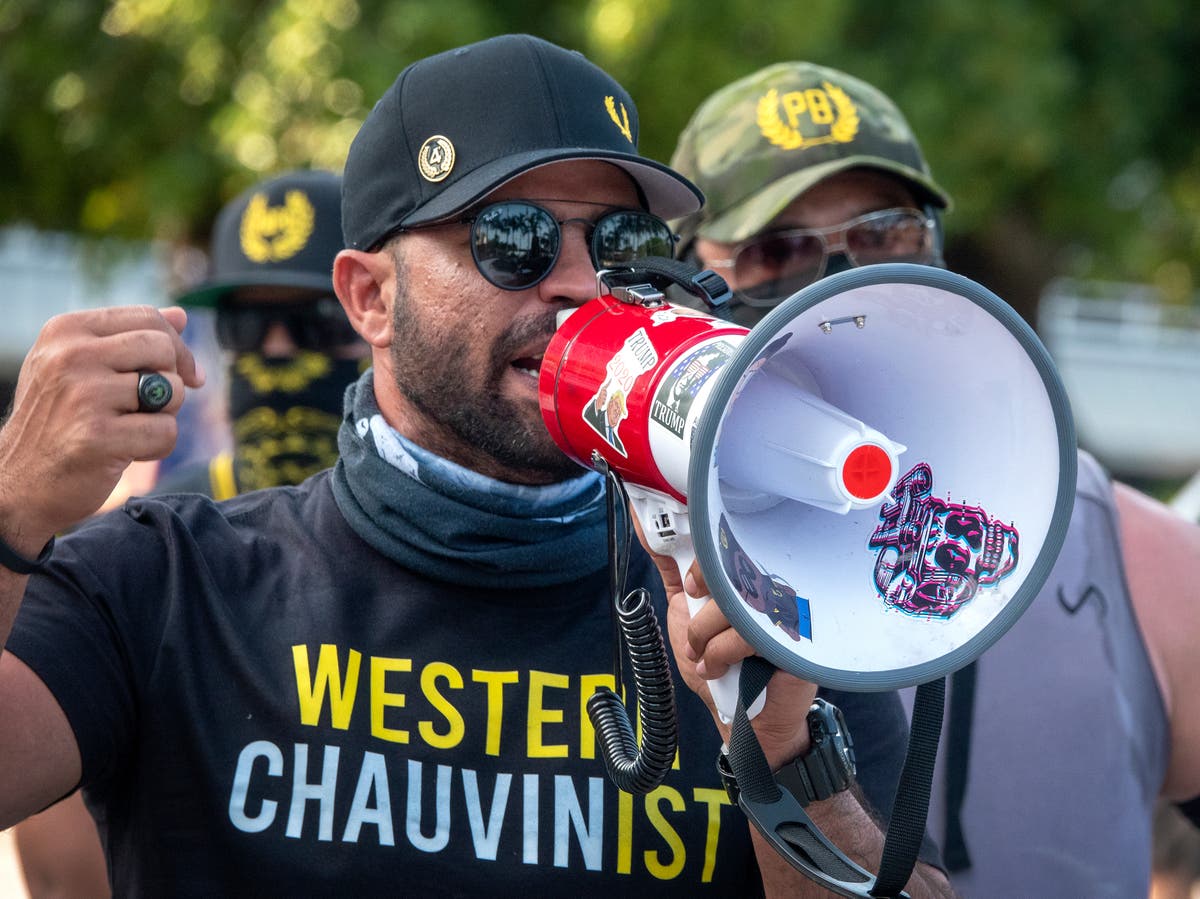 A court in Washington DC has ruled that Proud Boys leader Enrique Tarrio must remain in detention pending his trial on seven charges stemming from the 6 January 2021 attack on the US Capitol.

Mr Tarrio, who along with five other Proud Boys members, faces charges including conspiracy to obstruct an official proceeding, destruction of government property and assaulting, resisting or impeding law enforcement officers, was in Washington in the days before the Capitol riot, and was arrested in March this year. He has pleaded not guilty to the charges against him.

In his decision on Friday, DC District Court judge Timothy Kelly –  a Trump appointee – denied Mr Tarrio’s request to be released on bond, agreeing with another judge’s earlier ruling that he “presents a danger to the community and that no condition or combination of conditions will reasonably assure the safety of the community”.

Mr Kelly decided Mr Tarrio should remain detained based on his analysis of four factors: the nature of Mr Tarrio’s alleged offences, the weight of the evidence against him, his criminal record and multiple previous arrests, and “the nature and seriousness of the danger to any person or the community that would be posed by the person’s release”.

Before his arrest on the 6 January charges, Mr Tarrio – who reports say has previously served as an FBI informant – was arrested and charged with setting fire to a Black Lives Matter banner in Washington during a protest in December 2020. He pleaded guilty the following summer and was jailed for five months, and was arrested in relation to the Capitol riot in March this year.

Evidence of Mr Tarrio’s alleged involvement in events leading up to the 6 January investigation has not only been spelled out in the indictment against him and his several comrades, but has also been detailed on video released by the office of the US Attorney for the District of Columbia.

In a clip made public earlier this week, Mr Tarrio is seen meeting in an underground parking garage with Stewart Rhodes, founder of the self-proclaimed militia group the Oath Keepers, as well as the leaders of two other far-right pro-Trump groups. Government prosecutors say the video was filmed on the night before the insurrection.

Mr Tarrio and Mr Rhodes’s conversation is not audible in the footage, but on his way to the meeting, Mr Tarrio can be heard saying he feels “like a fugitive” and describing how he intends to “stay close” to the capitol in order to “make sure his guys are okay” on 6 January.

Mr Rhodes and several other members of the Oath Keepers faces charges of seditious conspiracy, some of the most serious charges brought by the government in its hundreds of cases against alleged rioters. Three members of the group have now pleaded guilty.

The date for Mr Tarrio’s trial was originally set for 18 May, but was vacated by Mr Kelly earlier this year after the Department of Justice requested more time to gather evidence.

Mayorkas calls for immigration legislation amid renewed scrutiny at the border