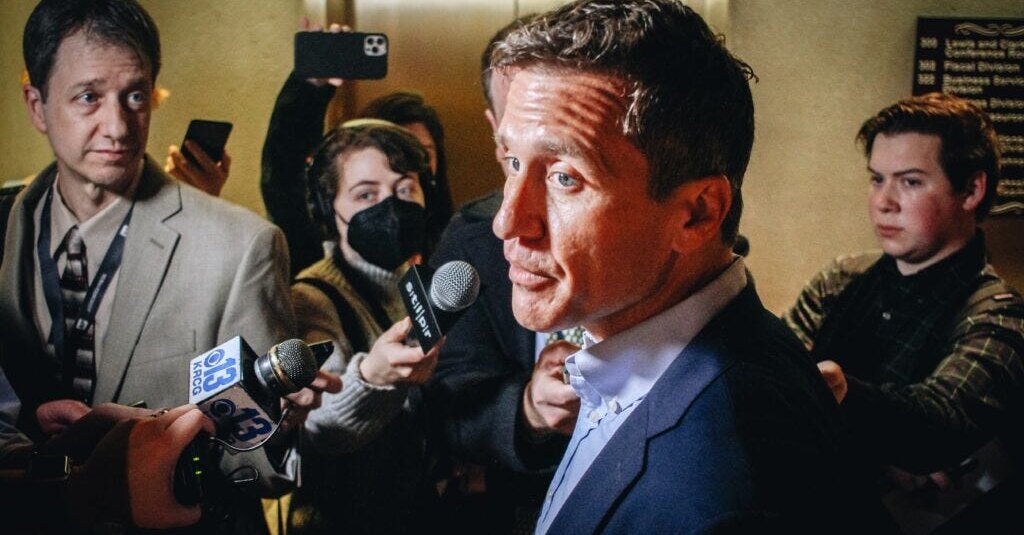 The long-awaited effort to stop Eric Greitens from becoming the Republican nominee for Senate in Missouri is finally getting underway.

The big question is whether it’s too late to stop him.

A robust, well-financed Republican campaign to highlight Greitens’s personal scandals — which include allegations of domestic and sexual abuse — is set to begin on Friday, starting with at least $1 million in paid television ads.

Politico first reported the arrival of the new super PAC, Show Me Values, which is being led by Johnny DeStefano, a longtime aide to Representative John Boehner of Ohio who became a powerful figure inside the Trump White House.

The leaders of the drive to halt Greitens, which is being spearheaded by a coalition of in-state donors, hope to fundamentally alter the dynamics of a race that has been stagnant for months by sounding a drumbeat of allegations about disturbing and erratic behavior by the former Missouri governor.

But as they look to avoid jeopardizing what is most likely a safe Republican Senate seat, they face a tight timeline ahead of Missouri’s Aug. 2 primary, and it is unclear whether new details about Greitens’s alleged conduct will resonate with G.O.P. voters.

Greitens’s history has long been subject to scrutiny — and new accusations have steadily emerged.

In 2018, he resigned as governor amid allegations that he had sexually abused a hair stylist with whom he was having an extramarital affair. Greitens denies the accusations, which the woman detailed in sworn testimony during an impeachment inquiry led by fellow Republicans in the state.

His ex-wife, Sheena Greitens, a scholar of Asian geopolitics, left him after those allegations came to light and moved to Texas. The couple are now waging a bitter court battle over custody of their elementary-school-age children.

In a sworn affidavit released in April, Greitens accused her former husband of a pattern of abusive behavior, including allegedly “cuffing our then-3-year-old son across the face” and “yanking him around by his hair.”

The former governor has denied all wrongdoing, and on Thursday his campaign pointed to a previous statement provided to The New York Times by Tim Parlatore, a lawyer for the candidate. The alleged abusive behavior “never happened,” Parlatore said.

At a court hearing on Thursday, a lawyer for Sheena Greitens, Helen Wade, said that her client had received death threats this week after the former governor released a violent new political video that shows him armed with a shotgun and storming a home in search of “RINOs,” or Republicans in name only, along with what appears to be a SWAT team wielding military-style rifles. Wade did not respond to multiple messages seeking comment on Thursday.

For now, Greitens is ahead of his nearest opponent, Eric Schmitt, the Missouri attorney general, by about 3.5 percentage points, polling averages of the race show.

Schmitt has the backing of Save Missouri Values, a super PAC bankrolled by Rex Sinquefield, a wealthy retired investor who is a dominant player in state politics.

Sinquefield, who is also the primary funder of Show Me Values, the new anti-Greitens super PAC, is best known for his devotion to three “idiosyncratic passions,” according to a critical 2014 profile in Politico Magazine: “promoting chess, dismantling the traditional public school system and eliminating income taxes.”

Until now in the Senate primary campaign, not one television ad has aired laying out Sheena Greitens’s most recent allegations. One of the new ads from Show Me Values will focus on her accusations, saying that Eric Greitens has faced “scandal after scandal,” according to two people familiar with its contents.

The most effective knock on Greitens with likely Republican primary voters in Missouri, polling conducted by a rival campaign discovered, might sound a bit surprising.

It involved informing them that he had previously identified as a Democrat and traveled to the Democratic National Convention in 2008 to hear a young, progressive senator named Barack Obama accept his party’s nomination for president.

The president’s endorsement could be decisive — and everybody knows it.

Allies of both Schmitt and Representative Vicky Hartzler, another Senate candidate who is closely trailing Schmitt in most polling, have been cautioning Trump and his allies against backing Greitens.

One argument that seems to resonate with the former president, according to people who have spoken with him: Don’t risk upsetting your pristine endorsement record in 2022 Senate races.

On Wednesday, after Katie Britt defeated Representative Mo Brooks in a G.O.P. primary runoff for a Senate seat in Alabama, Trump boasted that his scorecard remained perfect in Senate primaries this year.

“With the great ALABAMA win by Katie Britt tonight, I am pleased to announce that WE (MAGA!) are 12 WINS & ZERO LOSSES in U.S. Senate Primary races this cycle,” Trump wrote on Truth Social, his Twitter-like social media site. He made no mention of the fact that he had previously endorsed Brooks before souring on his candidacy.

The younger Trump has advised his father to allow the primary to develop further before endorsing anyone, according to two people familiar with his thinking. A spokesman for Trump said that, to his knowledge, an endorsement was not “imminent,” and that he had not seen any draft announcements.

Allies of Greitens are eager to link any effort to attack him to Mitch McConnell, the Senate minority leader, who is a frequent target of Trump’s ire. McConnell’s team did not return phone calls on Thursday, but there is no evidence that his allies have any connection to the new super PAC.

Republicans in Washington worry that if Greitens manages to win the primary, he might saddle their party with an embarrassing, and expensive, candidate who could throw the seat to Democrats.

Guilfoyle is the national finance chair of Greitens’s campaign. Despite her help, his campaign has struggled to raise money, according to the most recent campaign finance reports, forcing him to rely almost exclusively on one Republican donor — the billionaire shipping magnate Richard Uihlein, who has given at least $2.5 million to a super PAC supporting Greitens’s candidacy.

Allies argue that Hartzler, a House lawmaker from western Missouri, has the best chance at beating Greitens. They are counting on the clout of Josh Hawley, the arch-conservative freshman senator who holds the state’s other Senate seat.

Her campaign this week began airing a new ad promoting the endorsement of Hawley, who has capitalized on his opposition to the certification of the 2020 election results to earn Trump’s favor and build a nationwide grass-roots donor base.

Polls show that Hawley is the state’s most popular politician, and the Hartzler campaign hopes to use his fund-raising prowess and omnipresence on Fox News to move voters in the state’s socially conservative hinterlands. Hawley raised about $400,000 for the campaign over a span of four days, his aides said.

“There’s a lot of Republicans running for the Senate,” Hawley says in the ad. “I know all of them.”

That’s an understatement: Hawley was the attorney general of Missouri while Greitens was governor, and the two men are not exactly friends.

In 2018, Hawley accused Greitens of misusing the donor list of his veterans charity and called on him to resign over the allegations involving the hair stylist.

The move helped sideline Greitens, a potential rival for Missouri’s other Senate seat, which Hawley assumed after defeating Claire McCaskill, the incumbent Democrat, in 2018.

“Fortunately for Josh,” Greitens shot back at the time, “he’s better at press conferences than the law.”

What to read tonight

Thanks for reading. We’ll see you tomorrow.

Is there anything you think we’re missing? Anything you want to see more of? We’d love to hear from you. Email us at [email protected].