Elections test heat of hot buttons inside both parties: The Note 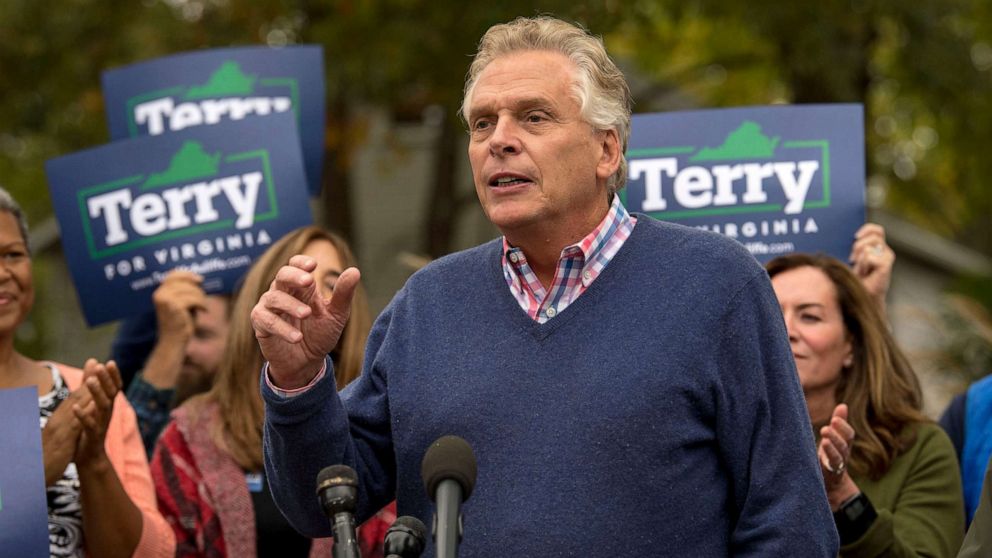 Are they talking points or voting issues? Cable news teases or galvanizing forces?

Beyond the midterm table-setting and tests of strategy, the 2021 elections will deliver partial answers about what matters to voters and what’s just so much base-driving noise in a very loud world.

Tuesday’s main event is the governor’s race in Virginia, where Democrat Terry McAuliffe and Republican Glenn Youngkin both represent something close to the middle of their respective parties.

You wouldn’t know that from the way the races have played out, though. One of the candidates will be elected governor in part because he did an effective job of linking his rival to more extreme elements inside his party.

From the left, airwaves have been crammed with imagery of Charlottesville and former President Donald Trump, along with warnings about the future of abortion access and LGBTQ rights. From the right, ads and campaign rallies have focused on school safety, critical race theory, parents’ role in shaping curriculums as well as COVID mandates and restrictions.

Elsewhere in the country, in mayor’s races, special House elections and ballot initiatives, voters are sorting through nationalized issues made local in areas including police reform, election integrity and whether to pursue a Democratic Socialist agenda or stick with a more traditional Democrat.

The most closely watched voters in statewide races in Virginia and New Jersey live in the suburbs, where Democrats won their congressional majorities and took the presidency a year ago.

Strategists in both parties have no shortage of issues to choose from if the goal is to motivate a base. Resonating beyond that is a key challenge that will determine how 2021 and 2022 play out.

“The political games have to stop. Twice now the House has balked at the opportunity to send the [bipartisan infrastructure] legislation to the president,” Manchin said, calling for the House to hold an up or down vote on the bill. “Holding this bill hostage is not going to work in getting my support for the reconciliation bill.”

Manchin’s concerns about the price tag, inflation and the national debt aren’t unusual, but criticism of Biden’s plan while he’s on the world stage is. Manchin’s presser came just hours after Biden touted the plan in Glasgow, Scotland, on his high-stakes foreign trip.

Progressive Caucus Chair Rep. Pramila Jayapal, D-Wash., says the House is prepared to pass both bills in “the next couple of days.” In reference to Manchin’s comments, Jayapal told reporters “I don’t understand it.”

White House press secretary Jen Psaki, from COVID-19 isolation, issued a statement contending that the current framework meets Manchin’s demands and that the White House is “confident” it will gain his support.

Last week, House Speaker Nancy Pelosi warned her caucus not to “embarrass” President Joe Biden while he is abroad, but after Manchin’s blistering comments, perhaps it was Senate Majority Leader Chuck Schumer who should have handed down that edict.

A high-profile and tangible police reform proposal that stems from the death of George Floyd is slated to define the future of the Minneapolis Police Department on Tuesday. As reported by ABC News’ Adia Robinson, the “Question 2” ballot measure is asking voters if the city should amend its charter to replace the police department with the Department of Public Safety.

Although the measure is supported by activists who hope to usher in progress regarding the role of police within communities, opponents say it is poorly defined and was crafted without enough community input. That dichotomy among voters fostered a complicated political environment for the state’s top Democrats.

Some of them — including Sens. Amy Klobuchar and Tina Smith, as well as Gov. Tim Walz — expressed concerns about the scope and impact of the measure, effectively voicing opposition to the “defund the police” slogan. Minnesota progressives like Rep. Ilhan Omar and Attorney General Keith Ellison say the measure accurately reflects the calls for change coming from constituents.

Despite their opposition, Klobuchar, Smith and Walz have not actively campaigned against the measure, which is being voted on just a few weeks after Congress failed to move forward with federal police reform legislation.

ABC News’ “Start Here” Podcast. On Tuesday morning’s episode ABC’s David Muir reports on the devastating effects of climate change on the food supply of Madagascar. Then, legal contributor Kate Shaw breaks down the SCOTUS deliberations on the Texas abortion law. And, ABC’s Kenneth Moton tells us what he’s been hearing from voters ahead of Virginia’s gubernatorial race. http://apple.co/2HPocUL