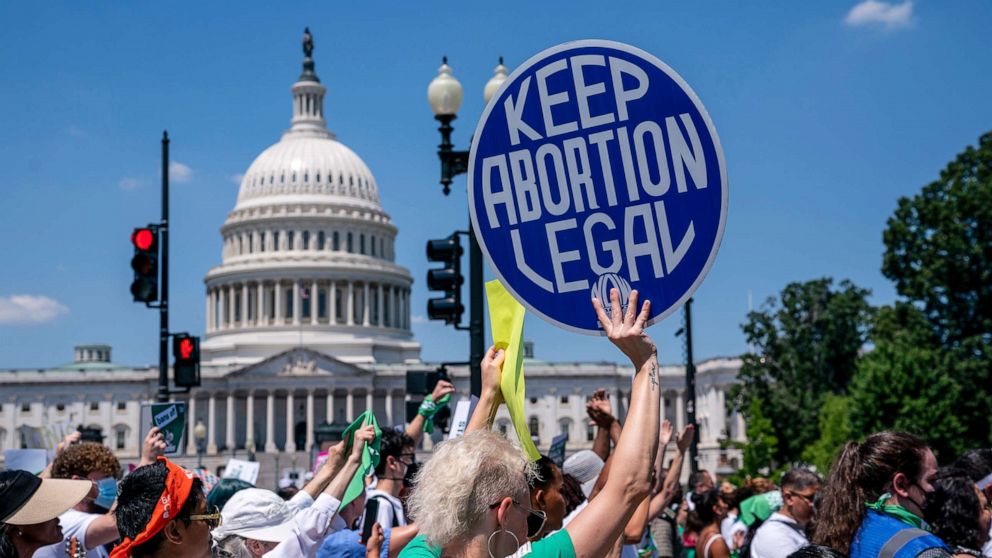 Democrats are working to ensure their incumbents and midterm candidates maintain message discipline around a simple pitch to the public on abortion while the party looks to use the Supreme Court ruling overturning Roe v. Wade to help persuade and motivate voters come November.

Lawmakers and contenders across the country have thus far echoed the same stance: The choice to have an abortion should be made between a person and a doctor. In doing so, Democrats have avoided taking the bait on Republican attacks accusing them of supporting abortions in the second and third trimesters — procedures that are rare but that polls show voters approve of significantly less than abortions earlier on in pregnancies, when access is broadly supported.

“I think we’re certainly going to see the other side try to lead us in that direction, and so I think it has the potential where it can certainly create a lot of gray area. And right now, we’re in a position where I think the people of Arizona are seeing this in pretty black-and-white terms, and they’re more in favor with us than they are with them,” Arizona state Sen. Martin Quezada, who is running for treasurer in a state where all abortions could soon be banned, told ABC News.

Despite that discipline, Democrats are still grappling with various debates on the best strategy around ensuring abortion access — and President Joe Biden has faced calls from others in the party to be more vocal and more detailed with his own plan.

But so long as Democrats stay away from debates over abortions in the second and third trimesters, party strategists who spoke with ABC News argued, the issue will remain politically advantageous in a cycle still largely characterized by voters’ concerns over high inflation, which have helped sharply weaken Biden’s approval ratings.

For their part, Republicans and their conservative allies have repeatedly tried to knock Democrats into more treacherous rhetorical territory — something that Quezada, in Arizona, acknowledged. “I certainly expect they will start to try to dilute that messaging and try to get us lost in that gray area. That potential to lose some support is there,” he said.

Stacey Abrams, the Democratic nominee in Georgia’s gubernatorial race, was pressed repeatedly on Fox News Sunday last month over whether she supported abortions up to nine months. Republican Senate candidates have also cast their opponents as radicals on abortion. And the Republican National Committee has been looking to frame all Democrats as dodgy on the restrictions they would support.

“What’s radical and out of touch is Joe Biden and Democrat politicians refusing to name a single limit they would seek on abortion,” said RNC spokesperson Nathan Brand.

Still, Democrats have not budged.

During her Fox News interview, Abrams said that abortion was “a medical decision … that should be a choice made between a doctor and a woman and in consultation with her family.” She later told The Atlanta Journal-Constitution that she would support legislation enshrining the right to an abortion “until a physician determines the fetus is viable outside of the body.”

And in the House, Speaker Nancy Pelosi, D-Calif., has been pushing for passage of legislation that would enshrine Roe, the 1973 Supreme Court decision first protecting abortion access, into law — while staying away from language about trimesters.

The need for that caution is borne out in polling.

Such discipline, strategists said, allows Democrats to instead highlight unpopular stances from Republicans like foregoing exceptions in abortion bans for rape and incest.

On top of that, the Democratic National Committee and Democratic Congressional Campaign Committee have each briefed campaigns on messaging to highlight Republican stances on abortion, according to aides.

“I think it’s paramount that Democrats are disciplined here. I think that this is an incredibly powerful issue and incredibly powerful contrast with Republicans,” said Molly Murphy, a Democratic pollster advising several midterm campaigns. “Voters are deeply troubled when they learn that Republicans support making abortion illegal without exceptions for things like rape and incest and the life of a woman.”

To be sure, Democrats still face internal divisions over precisely how to tackle abortion rights.

Party members are debating backing allowances for abortions on federal lands, pushing an expansion of the Supreme Court and enacting a legislative filibuster carveout for abortion to eliminate the Senate’s 60-vote threshold on the issue.

The White House has said it is currently not considering allowing abortion clinics to operate on federal lands over legal liabilities for workers, sparking frustration among progressives. And while Biden on Thursday said he supports a filibuster carveout for abortion — new ground for the president — there are currently not enough Democratic votes in the 50-50 Senate to change the upper chamber’s rules.

Yet some pollsters said the minutiae of legislating on abortion will not resonate with voters as much as the overall issue.

“Ultimately the filibuster is process and not message. Democrats can talk about Republicans prioritizing making abortion illegal without exception and stay away from process, not because the filibuster carveout is bad … but because voters don’t care about process,” Murphy said.

And for Democrats running in conservative districts and states, operatives say they must be allowed to buck the overall party messaging and, if it aligns with their local voters, have the freedom to vocalize opposition to second- and third-trimester abortions.

“How they frame that I think should be reflected upon, one, their personal experience, but also the makeup of the district. We don’t win races in a collection. We win them race by race, individual by individual,” said Democratic strategist Antjuan Seawright. “And I think with every messaging point, it has to be done that way. Anything to the contrary could be a threat to the majority we do have”

On the flip side, Republicans have already dealt with some high-profile lapses in their discipline on the issue.

Yesli Vega, the GOP nominee in a swing House district in Virginia, sparked controversy last month when she agreed with an assessment that it was harder to get pregnant as a result of rape “because it’s not something that’s happening organically.”

Vega later said, “As a mother of two children, yes I’m fully aware of how women get pregnant.”

And when asked late last month if a 12-year-old girl who was raped by a family member should carry a pregnancy to term, Mississippi House Speaker Philip Gunn replied “that is my belief. I believe life begins at conception.”

Such comments harken back to past campaign controversies like Missouri Republican Todd Akin, who lost a winnable Senate race in 2012 after he said victims of what he dubbed “legitimate rape” rarely got pregnant. Akin went on to apologize, saying in a video at the time, “Rape is an evil act. I used the wrong words in the wrong way.”

“If we see two or three other candidates or incumbents, especially, using that kind of rhetoric, it’s going to cause headaches for Republicans. No doubt about it,” said Doug Heye, a former top RNC official.

Operatives from both parties said that issues like inflation and wages will likely steer the midterm cycle, with a polling memo from the Republican State Leadership Committee showing that just 8 percent of voters think abortion is a top issue, versus 37 percent who answered with the high cost of living.

But in such a contested cycle, in which the Senate could be decided by any one race, campaign stumbles on an issue where the electorate’s views do not match their base have Republicans concerned.

When asked if a serious misstep on abortion could ultimately cost future control of the Senate, Heye replied, “Potentially so.”

Arizonans Trusted Kari Lake to Tell It Straight on TV. Will They Trust Her as Governor?

U.S. Insists It Will Operate Around Taiwan, Despite China’s Pressure