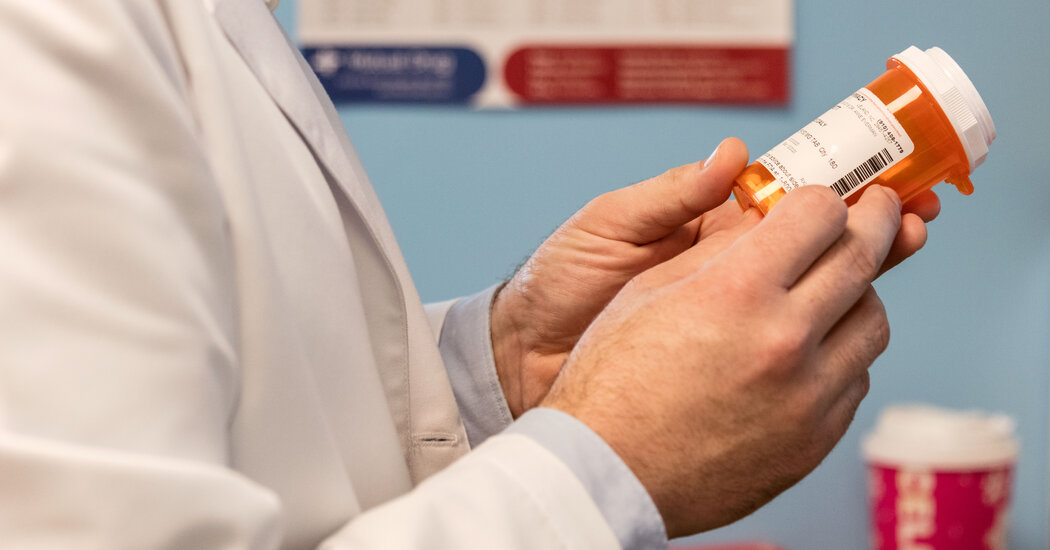 WASHINGTON — House Democrats reached a deal on Tuesday to add a measure to curb prescription drug costs to President Biden’s $1.85 trillion social safety net plan, agreeing to allow the government for the first time to negotiate prices for medications covered by Medicare as they pushed for a quick vote on the bill.

Negotiators were also pushing for a costly agreement to reinstate a federal deduction, capped in the 2017 tax cuts signed by President Donald J. Trump, for state and local taxes, which would benefit people in high-income states like New York and New Jersey.

The prescription drug deal is limited. Starting in 2023, negotiations could begin on what Senator Ron Wyden of Oregon called the most expensive drugs — treatments for cancer and rheumatoid arthritis, as well as anticoagulants. Most drugs would still be granted patent exclusivity for nine years before negotiations could start, and more complex drugs, called biologics, would be protected for 12 years.

But for the first time, Medicare, the federal health insurance program for people 65 or older and for disabled people, would be able to step in after those periods, even if drug companies acquire patent extensions or otherwise game the patent system.

“Fixing prescription drug pricing has consistently been a top issue for Americans year after year, including the vast majority of both Democrats and Republicans who want to see a change because they simply cannot afford their medications,” said Senator Chuck Schumer, Democrat of New York and the majority leader. “Today, we’ve taken a massive step forward in helping alleviate that problem.”

Stephen J. Ubl, the president and chief executive of the Pharmaceutical Research and Manufacturers of America, the industry’s main trade group, criticized the deal.

“While we’re pleased to see changes to Medicare that cap what seniors pay out of pocket for prescription drugs, the proposal lets insurers and middlemen like pharmacy benefit managers off the hook when it comes to lowering costs for patients at the pharmacy counter,” Mr. Ubl said. “It threatens innovation and makes a broken health care system even worse.”

The completion of the prescription drug section could be among the final major changes to the sprawling climate change and social safety net bill that Democratic leaders hope to bring to a House vote this week. Other issues remained to be ironed out, including a plan to deal with methane, a powerful greenhouse gas, and a measure to provide work permits and protection from deportation for undocumented immigrants. Democrats also want to address a growing backlog of green card applications.

Top Democrats appeared determined to press forward with votes as early as Thursday, even without an ironclad commitment by holdout moderates in the Senate to vote for the final package. Mr. Biden, speaking to reporters in Scotland, said the biggest Senate Democratic skeptic, Joe Manchin III of West Virginia, would come around.

“He will vote for this if we have in this proposal what he has anticipated,” Mr. Biden said at a news conference before departing a climate summit in Glasgow. “I believe that Joe will be there.”

Passage of the social safety net and climate bill would free the House to also give final approval to a $1 trillion infrastructure bill that passed the Senate in August, handing Mr. Biden a long-delayed legislative victory. Mr. Schumer said on Tuesday that he hoped to have the domestic policy plan ready for debate the week of Nov. 15.

Five moderate and conservative Democrats wrote to Ms. Pelosi on Tuesday warning that they would withhold their votes until nonpartisan scorekeepers had assessed the full cost of the legislation, and called for her to wait to ensure that every proposal in the bill could pass the Senate. A copy of the letter, reported by Politico, was obtained by The New York Times.

“It is better to get this done right than to needlessly rush its consideration only for our constituents to discover the negative impacts of our unintended consequences,” wrote the lawmakers, including Representatives Stephanie Murphy of Florida and Jared Golden of Maine.

But one of the signers, Representative Kurt Schrader of Oregon, signaled some flexibility, saying he would not hold out for a full report on the legislation’s impact, which could take weeks.

Because Republicans are unanimously opposed to the bill, Democrats are pushing it through Congress using a fast-track process known as budget reconciliation that shields fiscal measures from a filibuster and allows them to pass on a simple majority vote. But given their slim margins of control, to win even a bare majority they must secure the support of all 50 of their senators and all but a few of their members in the House.

Ms. Pelosi told reporters she hoped to have a final bill written as early as Tuesday night.

The prescription drug compromise was hard-fought and required Democrats to overcome an onslaught of lobbying by the powerful pharmaceutical industry, which succeeded in weakening their initial proposal to allow the government to negotiate prices on a broader universe of drugs. The final deal includes a $2,000 annual cap on out-of-pocket expenditures by older Americans facing catastrophic health issues, a strict $35 monthly cap on insulin expenses and automatic rebates on drugs whose prices rise faster than inflation.

But the pharmaceutical industry won its share of concessions. The inflation rebates initially contained a “look back” provision that would have assessed rebates on drug prices that began to soar as far back as 2012. That would have yielded one-time levies on drug companies in the billions of dollars. And some Democrats wanted to grant Medicare price-negotiating authority immediately, with no patent exclusivity periods.

Still, boosters of the compromise believe the negotiating powers it grants Medicare will be a first step toward securing the broader powers that Democrats have been campaigning on for decades.

“I don’t think this is simply a camel’s nose under the tent,” said Senator Christopher S. Murphy, Democrat of Connecticut and one of the negotiators. “I think we’ve gotten the head and part of the body in there, too.”

The legislation would require substantial price reductions in drugs subject to negotiations, starting in 2025. And, they said, the rules curtailing ever-extending patent protections will be key to lowering costs.

“The problem of evergreening patents so that tiny changes permit these companies to maintain monopolies for years and years and years is wrong,” said Senator Elizabeth Warren, Democrat of Massachusetts. “It violates the basic principle of granting these exclusivity licenses through patents, and has been abused by many of the big drug companies and needs to come to a halt.”

The changes to the Medicare prescription drug benefit are likely to have big consumer impacts even sooner. Currently, there is no limit on how much patients can be asked to spend on their drugs, and many Medicare beneficiaries face bills of $15,000 or more each year if they take expensive medicines. In addition to setting an annual limit on out-of-pocket spending, the plan would smooth spending across the year, eliminating the so-called doughnut hole when many beneficiaries are responsible for their entire drug bill.

Juliette Cubanski, a deputy director at the Kaiser Family Foundation, said the package would address key problems in the country’s drug pricing system.

If it becomes law, she said, “that would be a pretty significant accomplishment, particularly in light of the pushback that they are getting from industry stakeholders, who have a lot of money invested in not seeing these policies take effect.”

Mr. Schumer hastened to say that he had gotten a sign-off on the deal from Senator Kyrsten Sinema, Democrat of Arizona and another centrist holdout on the bill who opposed the House’s much broader prescription drug proposal.

Her office then released a statement saying that she welcomed “a new agreement on a historic, transformative Medicare drug negotiation plan that will reduce out-of-pocket costs for seniors — ensuring drug prices cannot rise faster than inflation — save taxpayer dollars and protect innovation to ensure Arizonans and Americans continue to have access to lifesaving medications, and new cures and therapeutics.”

The agreement on state and local taxes was still being hammered out on Tuesday, but Democrats said it would suspend a $10,000 cap on the so-called SALT deduction for five years. The suspension would kick in for deductions related to property taxes and state and local income taxes accrued in 2021 and run through 2025.

It remained unclear whether the agreement would apply across the board, or would be subject to an income cap to prevent the wealthiest Americans from getting what amounts to a tax cut.

Senator Bernie Sanders, independent of Vermont and the Budget Committee chairman, warned that he would oppose the provision unless it was limited to the middle class.

“At a time of massive income and wealth inequality,” he said in a statement, “the last thing we should be doing is giving more tax breaks to the very rich.”