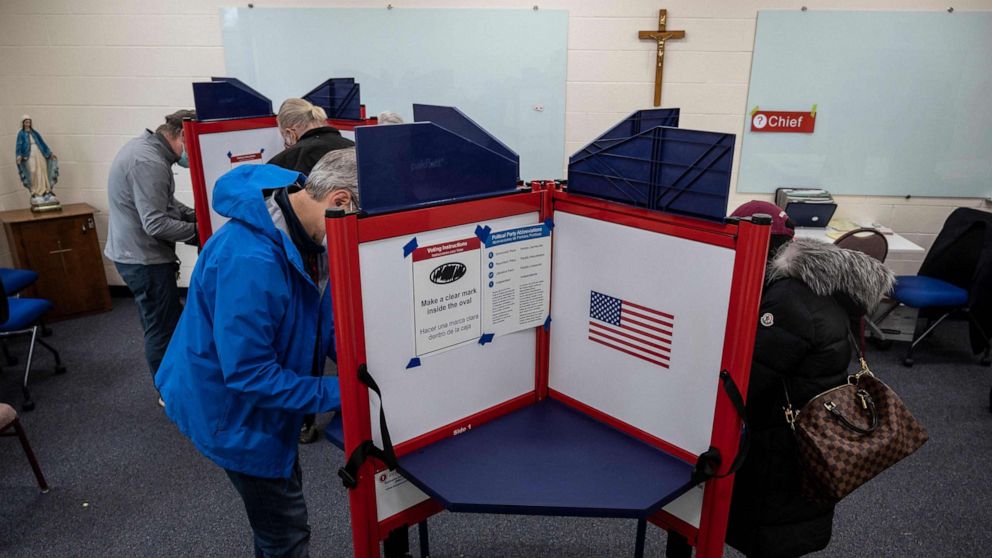 A more closely divided electorate than a year ago, underwater ratings for President Joe Biden and former President Donald Trump alike and a popularity deficit for the Democratic candidate define the hard-fought, off-year contest for Virginia governor in preliminary exit poll results.

Among challenges for the Democrats — who’ve won all statewide races in Virginia dating to 2013 — is the lack of personal appeal of their candidate: former Gov. Terry McAuliffe. Just 45% see him favorably, versus 52% unfavorably, in exit poll results so far. Republican Glenn Youngkin does better on this score, 53-43%, favorable-unfavorable.

Compounding McAuliffe’s challenges are negative views of Biden’s job performance; more Virginia voters disapprove than approve, 54-45%. Intensity, which can influence turnout, is particularly poor for Biden: Nearly twice as many “strongly” disapprove of his work in office, 45%, than strongly approve, 24%.

Given those views, turnout has shifted from a year ago. Virginia voters report having split evenly between Biden and Trump in 2020, 46-46% — indicating that many Biden supporters were sitting this contest out, since he won the state by a 10-point margin.

Trump, for his part, is no more of an attraction: He’s seen favorably by 42% in these preliminary results, unfavorably by 53%, an 11-point negative score. Youngkin kept Trump at arm’s length in the campaign, as did McAuliffe with Biden (save two joint campaign rallies), for reasons that seem evident.

These are preliminary exit poll results, including early voters, and can change as data are updated throughout the evening.

The race is being watched as an early test of Democratic vulnerabilities under Biden, with an eye toward the 2022 midterm elections. More Virginia voters say a reason for their vote was to show opposition to Biden (29%) than support for him (21%). Still many more, 47%, say he wasn’t a factor in their choice for governor.

In terms of preliminary exit poll estimates among voter groups:

The suburbs are a key battleground in Virginia, as elsewhere. A big group — they account for more than six in 10 voters — suburbanites are tipping slightly toward Youngkin in preliminary exit poll results, 53-47%.

Robust turnout by college-educated voters is one factor for McAuliffe. College graduates account for 49% of voters in preliminary exit poll results, up 6 points from last year’s presidential election, and McAuliffe is winning 58% of this group. Youngkin, for his part, does strongly among those without a college degree, outperforming Trump a year ago.

Youngkin may have done himself a favor by keeping Trump at a distance. Among the majority of Virginia voters who hold an unfavorable opinion of Trump, 2 in 10 are voting for Youngkin regardless. About half as many Biden disapprovers are backing McAuliffe, 9% percent.

Youngkin made education a centerpiece of his campaign, arguing for parental input and against critical race theory. Just fewer than a quarter of voters pick education as the top issue in their vote — second only to the economy — and Youngkin is winning them by 56-44% in these preliminary results.

This is the first election in which Virginia has offered early in-person voting, from mid-September through Saturday, and the exit poll estimates that 27% voters availed themselves of it — a group in which McAuliffe won 57%, countered by strong results for Youngkin among Election Day voters.

Youngkin is winning 87% of white evangelical voters, the largest share of white evangelicals for a Republican in Virginia in exit poll data in gubernatorial or presidential elections dating to 2008. They make up more than a quarter of the electorate.

Voters’ criticisms extend to the major parties overall, indicating more vulnerability for the Democratic Party — 52% call it too liberal — than for the Republican Party, called too conservative by fewer, 43%.

On specific issues, though, the electorate itself is not so easily categorized. Fifty-eight percent in these preliminary results favor legal abortion and 54% support employer mandates for coronavirus vaccines, both closer to McAuliffe’s views than to Youngkin’s. On the other hand, 54% say monuments to Confederate leaders on government property should be left in place.

Youngkin sought to make parental involvement in school curricula a key issue, striking a chord; 53% of voters say parents should have “a lot” of say in what their child’s school teaches.

Voters divide in choosing the most important of five issues facing Virginia: the economy and jobs (33%), education (23%), taxes (15%), the pandemic (14%) and abortion (9%). It’s notable that the economy finishes as the top issue even as 56% rate it positively — and also that the pandemic trails as a top concern.

The poll, conducted for ABC News and its media partners, includes interviews conducted both in advance of Election Day, to capture the views of early and absentee voters, and among in-person voters today. Results will be adjusted to reflect the official results after votes are counted.

In an additional potentially key measure of turnout, white Virginians account for 74% of voters in exit poll results so far, compared with 67% in 2020, when Trump won them by 8 percentage points. Members of racial and ethnic minority groups are 26% of voters in these data, vs. 33%last year, when Biden won them by a vast 53 points. That said, minority voters accounted for about the same share of turnout, 28%, when McAuliffe won the governorship in 2013.

Preliminary data indicate a dearth of young voters and a surfeit of those age 65 and older. Still, another shift suggests potentially higher turnout in the more Republican-leaning central and mountain regions of the state. And one region flipped — Richmond/Southside, from +14 for Biden in 2020 to +6 for Youngkin in these results.

In partisan preferences, Democrats and Republicans are evenly matched, 35-35% in these preliminary results, with independents — likely the decisive group — making up the rest.