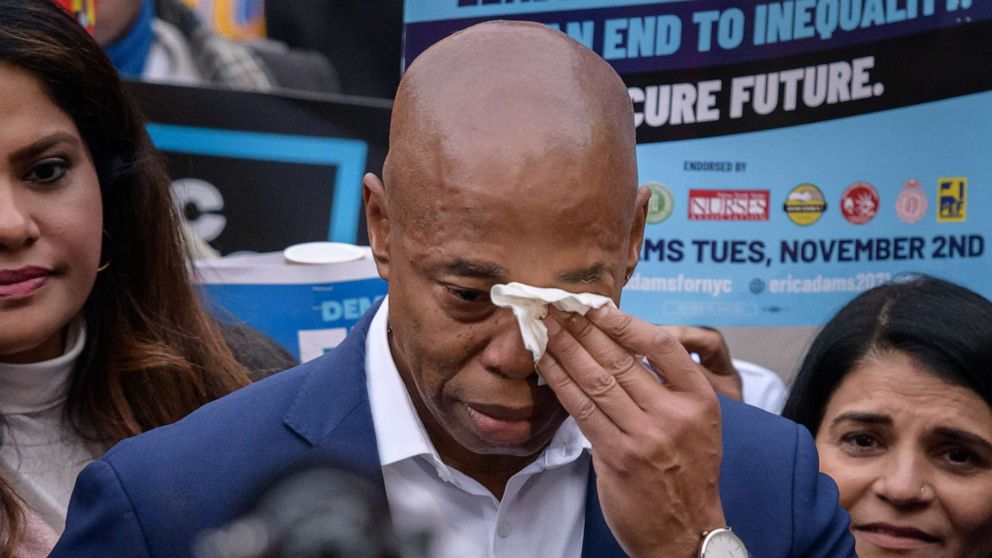 Adams is the Brooklyn borough president.

The win, while expected in a city with many more registered Democrats than Republicans, makes some history as Adams is only the second Black mayor in the history of the city.

Curtis Sliwa, who founded the Guardian Angels as a response to crime in the subway in the 1970s and was later a political commentator, was the Republican nominee.

“This is is an amazing day, to reach this point,” Adams told reporters Tuesday morning as he took to the polls. “Back in 1977, my mom brought me into that polling place. Every little boy or little girl who was ever told they’ll never amount to anything — every child with a learning disability, every inmate sitting in Rikers, every dishwasher, every child in a homeless shelter — this is for all of you. I only have three words: I am you.”

Sliwa made his own headlines at the poll, trying to bring one of his rescue cats into his voting location. The passionate animal rescue activist was told his feline friend had to stay outside.

But even once he got inside, his ballot got jammed in the scanner and technicians were needed to fix it.

David Dinkins, who died last year at 93, was the first Black mayor in New York City history, serving from 1990 to 1993 before losing to Rudy Giuliani in a heated reelection campaign.

Adams, considered a moderate Democrat after the progressive Bill de Blasio spent two terms in office, won out for the nominee in a crowded field in June. Adams separated himself from a pack that included former presidential candidate Andrew Yang and second- and third-place finishers Kathryn Garcia, the former Department of Sanitation commissioner, and Maya Wiley, who was favored by progressives like Rep. Alexandria Ocasio-Cortez.

In the city’s first use of ranked choice voting, Adams crept over the 50% mark with Garcia at 49.6%. A snafu from the city elections board caused confusion in the weeks after the June 22 voting date before Adams was eventually declared the nominee.

De Blasio was term-limited out of office and previously explored a presidential run during his second term. Sliwa often attempted to tie Adams to the unfavorable opinion many hold for the current mayor.

Republican senator tells constituents he supports $35 insulin cap, days after voting against it