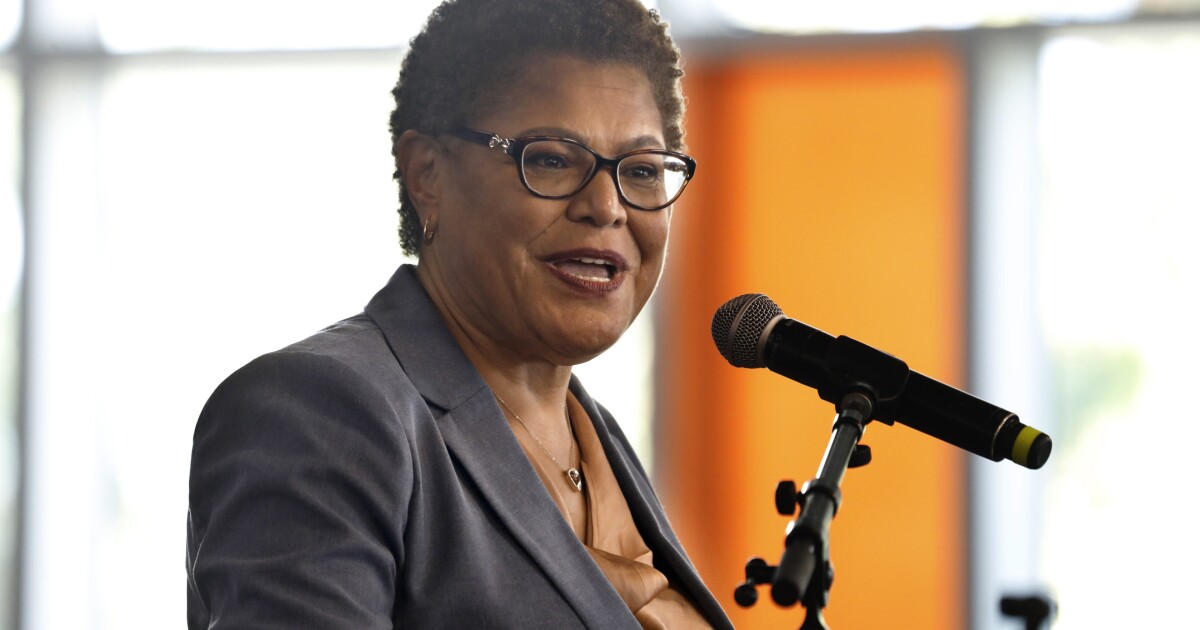 Rep. Karen Bass’ congressional district encompasses some of the most historically important African American communities in the western United States, including the “Black Beverly Hills” of Ladera Heights, the West Coast rap scene of Crenshaw and the vibrant cultural hub of Leimert Park.

But a confluence of factors — the state’s impending loss of a congressional seat for the first time in its history in the aftermath of the 2020 census, the declining Black population in this swath of Los Angeles and Bass’ decision not to seek reelection to Congress as she mounts a run for mayor — is prompting fears that the district will no longer be represented by an African American as congressional boundaries are redrawn this year.

These concerns were heightened when a state panel released preliminary maps called visualizations last week that placed Democratic Reps. Bass and Maxine Waters — the only other elected Black member of Congress from Los Angeles — in the same district, in effect eliminating a minority-led congressional seat.

There is no doubt that these maps will change; at least three more iterations will be released before the lines are finalized in December. But even before the first visualizations were made public, there were fears among residents in those districts about losing influence.

“I don’t want this area to change. This is the only area that Black people have in Los Angeles at the moment to just come together and mingle and feel safe,” said Seven Martin, who works at Hot + Cool Cafe in Leimert Park Village. He believes it is imperative for the neighborhood and surrounding areas to continue to be represented by Black politicians who know the community.

Martin, 30, spoke on a recent afternoon at the coffee shop as men played reggae music outside and a health clinic offered free coronavirus tests. Patrons browsed the shelves at Eso Won Books, shopped the African and Middle Eastern fashions at Queen Aminah’s Clothing and dined on jerk chicken and goat curry at Ackee Bamboo Jamaican Cuisine.

Bass, who did not respond to a request for an interview, has represented the district since 2011. It’s one of two Southern California districts represented by African Americans. The other is Waters’ district, which includes parts of Los Angeles and Torrance as well as the cities of Inglewood, Hawthorne, Lawndale, Gardena and Lomita.

Each of California’s congressional districts should be home to about 761,000 people, but the 2020 census showed that both of these districts are tens of thousands of residents shy of that figure, one of multiple reasons their boundaries will change during the once-every-decade redrawing of district lines currently underway.

Latinos outnumber Black people in these districts, though the number of residents eligible to vote varies. In Bass’ district, the population of voting-age citizens is 28% Black and 27% Latino. In Waters’ district, it’s 28% Black and 35% Latino.

Given the left-leaning tilt in Los Angeles, Democratic incumbents are almost certain to win reelection regardless of how districts are configured. But with Bass retiring, as well as the state losing a congressional seat, there is concern about opportunities for African American politicians.

“I hope people don’t see her decision not to seek reelection as an easy out to either eliminate the district or to change it in a way that drastically reconfigures it and reduces its influence,” said state Sen. Sydney Kamlager, whose legislative district includes much of Bass’ district.

(Kamlager, 49, has been widely viewed as a potential successor to Bass, but she says she has not decided whether to run for Congress.)

Before the preliminary maps were released, concerns about Bass’ district were prompted by another set of maps — submitted by the Mexican American Legal Defense and Educational Fund — that some worry had the potential to leave Waters the sole Black member of Congress from Southern California.

“I believe you can still have two districts where it is possible for Black voters to elect candidates of [their] choice,” he said. “That said, with Karen Bass’ retirement, there will not be an incumbent in one of those districts — that’s where it becomes dicier.”

The historic Black heart of Los Angeles will probably be represented by Latino politicians in the future because of the steady growth in the number of Latinos at the same time the African American population is declining, Saenz said.

This part of Los Angeles attracted African Americans who migrated from the South after World War II in search of work, including in the defense industry. Black families were able to buy houses, in part because of the GI Bill, which allowed for a generational accumulation of wealth that was not possible in many parts of the country.

But in recent years, Black families sought housing elsewhere in Los Angeles or outside the city or left the state. Gentrification is also driving families to sell houses in these areas.

Former City Councilwoman Jan Perry, who was the second Black woman to serve on the council when she represented parts of the district from 2001 to 2013, said it was critical to not dilute the voice of African Americans in Los Angeles at all levels, from Congress to the state Legislature to City Hall.

“Our community is unique and should be represented by people who fully understand the depth and breadth of what it means to be African American in Los Angeles,” Perry said.

Various iterations of the district over the decades have been the launching pad for a number of African American trailblazers in Congress, including Reps. Yvonne Brathwaite Burke, Julian Dixon, Juanita Millender-McDonald, Diane Watson and Bass, who was considered by Joe Biden as a potential running mate.

“The historic leadership in that seat has been profound, not just for African American Angelenos but for all underrepresented groups across the country,” said Los Angeles County Supervisor Holly Mitchell, who represents much of the district. “Their attention to the needs of this community has not gone unnoticed in so many areas — public transportation, infrastructure, healthcare.”

The California Citizens Redistricting Commission is scheduled to release another set of visualizations on Wednesday, draft maps in mid-November and final maps around Christmas.

The first visualizations received so much criticism during a recent public meeting that one commissioner said, “We are not the enemy,” GOP redistricting expert Matt Rexroad recounted.

“The commission for the first time is getting some real pushback, and it is having an impact,” he said. “This is the way newly elected city council members behave. On the campaign trail, it is all theoretical and everyone is happy, but as soon as you have to draw a line on a map or approve high-density housing, you start upsetting people.”

The 14-member body’s first charge is creating equal-size districts, and its second duty is complying with the Voting Rights Act to avoid disenfranchising minorities. Later considerations include creating contiguous districts, trying to respect community boundaries and drawing districts that are geographically compact.

The independent commission, created by state voters in 2008 to end gerrymandering and partisan redistricting, is supposed to ignore incumbent protection, party politics and political expediency.

Paul Mitchell, a Democratic redistricting expert, said it is critical for the commission to deal with shifting demographics without diluting voting power of minorities, and that he still believes it is possible to draw two Los Angeles districts in subsequent maps that are likely to elect African American leaders. But he also said the task is not easy.

“It’s one of the toughest things they’re going to have to struggle with,” he said. Ultimately, though, “it’s not just a math problem. It’s an equity problem.”

Connie Malloy, a Pasadena resident who served on California’s first independent redistricting commission in 2011 and currently works for a nonprofit, dismisses any proposal that could decrease the number of Black congressional seats as one that “misses the boat.”

“It would really set us back in terms of not allowing the Black community to exercise its voice as widely and strongly as it really has the potential to do,” said Malloy, who is African American. “This is really unfortunate timing and really tone-deaf in this era right now.”

Malloy predicts a Voting Rights Act lawsuit if the commission eliminates one of seats held by an African American.

Community involvement is key as the commission creates maps.

Kirk Samuels, director of civic engagement with the Community Coalition, said the recall election, a likely undercount of Black residents and the pandemic have created additional challenges in getting residents to provide input about their priorities and concerns in the redistricting process.

The nonprofit — founded by Bass in 1990 to improve social and economic conditions in South Los Angeles — submitted proposed maps to the commission on Oct. 23.

“The fact we do have candidates that reflect our underserved and marginalized groups is bar none very, very important to communities specifically in South Los Angeles,” Samuels said. “It’s about wanting to be able to elect someone who comes from the community, looks like them, understands their concerns and issues.”

Griner swap wasn’t what US hoped for, but what it could get