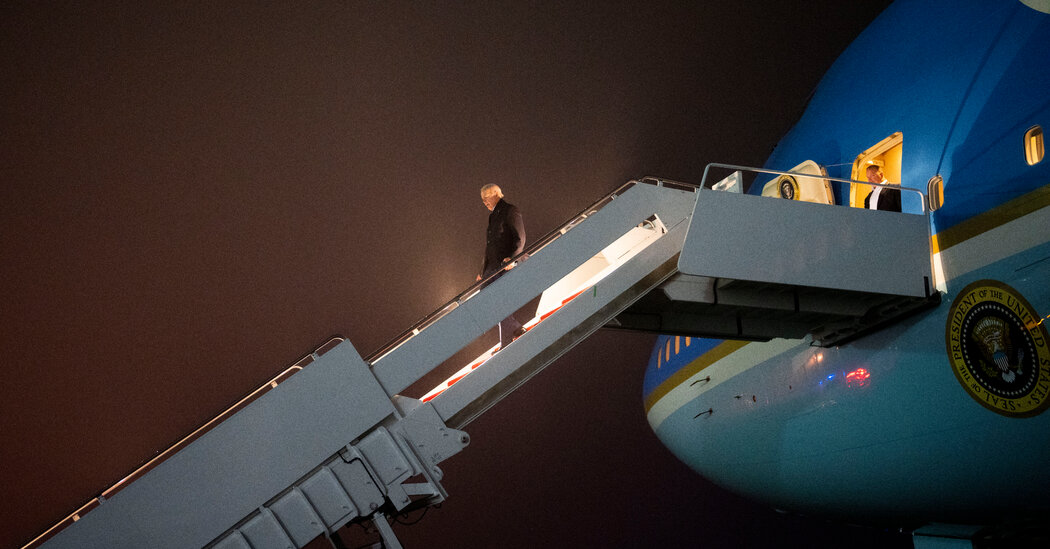 WASHINGTON — President Biden is facing blowback from some members of his own party over his mishandling of sensitive documents as his allies express growing concern that the case could get in the way of Democrats’ momentum coming out of the midterm elections.

Senator Richard J. Durbin of Illinois, the No. 2 Senate Democrat, said it was “outrageous” that secret documents had been found at Mr. Biden’s home. Senator Debbie Stabenow of Michigan called the crisis “embarrassing.” Senator Joe Manchin III of West Virginia said the president should have “a lot of regrets.”

The documents case has thrust Mr. Biden into an uncomfortable position after he started the new year with plans to do a victory lap of sorts, traversing the country to celebrate his administration’s legislative accomplishments.

Now, Republicans are prepared to make the documents case an issue in the 2024 campaign and members of Mr. Biden’s own party are openly criticizing him.

Investigators for the Justice Department found more than a half-dozen documents, some of them classified, at Mr. Biden’s residence in Wilmington, Del., on Friday — the latest in a series of discoveries that has already led to a special counsel investigation.

The case has drawn uncomfortable parallels to the investigation into former President Donald J. Trump’s hoarding of sensitive documents, even though there are significant differences between the two.

The White House has tried to emphasize that Mr. Biden has cooperated with the authorities, even inviting them to search his home, while Mr. Trump defied efforts to recover documents even after being subpoenaed, prompting a judge to issue a search warrant.

The discovery of classified documents from President Biden’s time as vice president has prompted a Justice Department investigation.

Some of Mr. Biden’s allies in Congress have rushed to defend him. Senator Chuck Schumer of New York, the majority leader, has advised Democrats to stress that unlike Mr. Trump, who has stonewalled for over a year, Mr. Biden and his attorneys are taking the matter seriously.

Many prominent members of the party have stuck to the message.

“President Biden’s lawyers did the right thing in immediately contacting the archives and turning them over, as well as over to the Department of Justice,” Representative Jamie Raskin, Democrat of Maryland, said earlier this month.

Still, the criticism by Democrats is striking.

Mr. Biden’s allies and political analysts have said the discovery last week of a “small number” of documents with classified markings at the home of Vice President Mike Pence could blunt Republican efforts to attack the White House over the mishandling of the documents.

“There are more parallels with Pence and President Biden, since both voluntarily turned in the papers,” said former Representative Cheri Bustos of Illinois. “Donald Trump is in another category altogether. Noncooperative. Combative. Unrepentant.”

But she encouraged the Biden administration to be proactively transparent, casting that approach as particularly urgent if the president is making plans to announce a re-election campaign.

“Right now, to make the announcement that he’s running for re-election, you know, there’s a cloud over that right now, because of this situation,” she said. “To have the news continue to drip out is just not helpful.”

Polls suggest that Americans see Mr. Biden’s handling of the documents as a serious problem, but it has not had a dramatic impact on the support from his base. Only about 18 percent of Americans consider Mr. Biden to be blameless, while 81 percent believe he has at least done something unethical, according to a CNN poll released Wednesday. But the poll found the revelations had little impact on Mr. Biden’s approval rating of 45 percent among voters, compared with 46 percent in December.

Matt Bennett, the co-founder of Third Way, a centrist Democratic organization, said the Pence documents could convince voters the issue is less of a crisis and more of a common mistake, “especially for very senior officials who leave during the hectic days at the end of the administration.”

“Considering a current president of great integrity and a former president of no integrity were both found to be in possession of classified documents in their personal residences,” he said, “it’s clear we must implement stronger controls to prevent compromising our national secrets and security.”

Representative Abigail Spanberger, a former C.I.A. officer and a member of House Democratic leadership, echoed his concerns about national security, even as she drew a distinction between the conduct of Mr. Trump and that of Mr. Biden. “That doesn’t make it any less serious,” she said. “How is it that classified documents can just be floating out there?”

Representative Jim Himes, Democrat of Connecticut, this week delivered some of the more severe criticism against Mr. Biden, who he argued “has apparently done what Trump did in retaining classified documents.”

His response irked some Democrats on the Hill, who said they want to maintain a consistent message that the special prosecutors should be able to conduct their investigations without being influenced by politics.

Mr. Himes later posted a tweet leaning harder into the differences between the two cases — the aspect that many Democrats want to emphasize.

Mr. Biden’s allies say the documents controversy makes it even more important for the president to travel the nation and focus on the issues that matter to Americans, such as the economy and in particular, the progress made on inflation.

“President Biden is squarely focused on delivering even more results for middle-class families by building on the progress he’s achieved fighting inflation,” said White House spokesman Andrew Bates. He said the discovery of documents would not affect any decision regarding the 2024 presidential election.

Others were also skeptical the issue would be deeply meaningful to swing voters, who will be critical to determining the outcome of the 2024 election.

Mr. Biden will focus on those economic themes when he delivers a speech in Springfield, Va., on Thursday. He is expected to attack economic policies proposed by House Republicans, including a plan to institute a national sales tax. But even some allies in Virginia are worried about how the documents issue could affect the party.

“I obviously think it weakens and undermines the arguments we have against the real malfeasance of the Trump administration,” said Bryan Graham, chair of the Fairfax County Democratic Committee. “It probably underscores there are controls and consequences that need to be put in place to help fix these problems.”

But he added that ultimately voters in his community were likely more interested to hear what Mr. Biden has to say about the economy.