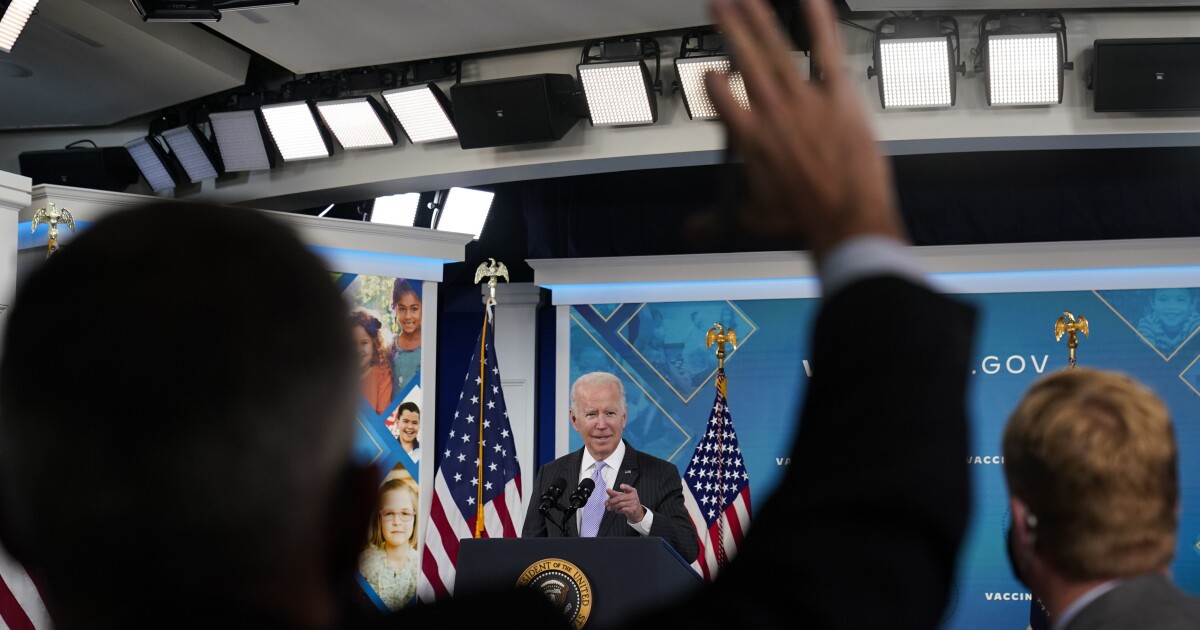 As President Biden bounced between meetings with world leaders during two major summits in Europe in the last week, he was asked again and again whether he could deliver on the lofty promises he’s made despite the political turmoil back home.

It’s a question that grew more urgent by the time Air Force One touched down early Wednesday morning. Democrats had lost the governor’s race in Virginia and only squeaked by in New Jersey, a red flag that Biden’s party is cruising toward a devastating midterm election next year.

The results sent tremors through Capitol Hill, where the president’s agenda has been trapped in congressional quicksand for months. House Democrats are trying to dislodge it this week as they push for votes on legislation that would invest in infrastructure, expand the social safety net and tackle climate change.

The final outcome, however, remains uncertain as Biden tries to forge a compromise between his party’s progressive and moderate wings at a time when he’s drawing on dwindling reserves of political goodwill. Public opinion surveys show Americans — frustrated by the protracted COVID-19 pandemic and rising prices, not to mention the chaotic withdrawal from Afghanistan — are increasingly unhappy with his leadership.

Biden said Wednesday that he wished his proposals had passed before this week’s elections.

As Biden was leaving the room, a reporter asked him for his message to lawmakers negotiating over the legislation. The president popped his head back in and said: “Get it to my desk.”

Congressional negotiations are taking place against a backdrop of alarm and finger-pointing among Democrats, some of whom blame inaction for the party’s problems at the ballot box.

New Jersey Gov. Phil Murphy defeated his Republican opponent, Jack Ciattarelli, but by a much narrower margin than had been expected.

In addition, Terry McAuliffe, a former governor and party fixture since Bill Clinton’s presidency, was defeated by Glenn Youngkin, a Republican and former chief executive of a private equity firm. Youngkin not only flexed muscle in conservative rural counties, but also made significant inroads among suburban voters who were key to Democrats’ recent gains in the state.

“This was not supposed to be such a close race,” said Mark Rozell, dean of the Schar School of Policy and Government at George Mason University. “Democrats were supposed to easily win in a state that has trended increasingly blue.”

McAuliffe had aggressively worked to tie Youngkin to former President Trump in hopes of juicing turnout among his supporters. However, Youngkin was able to keep Trump at arm’s length while also connecting with the former president’s base by emphasizing topics that have stirred outrage among conservatives, such as critical race theory, a decades-old academic framework that university scholars have used to study how racism intersects with American law.

Even though it’s not taught in public schools, far-right provocateurs have sought to rebrand it as a form of racism being pushed on white children by the far left, and at school board meetings in Virginia and around the country, parents have forcefully protested lessons about American racial history.

Republicans tapped into this anxiety among white voters on the campaign trail, and Youngkin vowed to ban the teaching of critical race theory on his first day in office.

“Youngkin gave them a version of Trumpism that they could get behind,” said Niambi Carter, a political science professor at Howard University. At the same time, she said McAuliffe may not have been the right candidate. “The Democratic Party keeps thinking the white moderate is the way forward, and I don’t know if that’s the case.”

Youngkin was also able to harness more general dissatisfaction among suburban parents — an important part of Democrats’ coalition last year — whose children could not attend in-person learning for much of the COVID-19 pandemic. Forty-five percent of working parents in northern Virginia said supporting their children’s education made work more difficult, according to a Washington Post-Schar School poll in July.

“Youngkin winning these college-educated white voters who are skeptical of Trump indicates Biden’s approval is likely slipping with these same types of groups in key battleground metropolitan areas like Atlanta,” said J. Miles Coleman, a political analyst at the University of Virginia’s Center for Politics.

Democrats have razor-thin margins in the House and Senate, and holding on to their majorities was always going to be an uphill proposition because a president’s party traditionally loses seats in midterm elections. But after Virginia’s results, Coleman and his colleagues shifted some of their projections for next year, suggesting that Democrats such as Sens. Mark Kelly of Arizona and Raphael Warnock of Georgia were more vulnerable than previously thought.

House Minority Leader Kevin McCarthy (R-Bakersfield) predicted Republicans could do better in 2022 than they did in 2010 — the first midterm of Barack Obama’s presidency, in which Democrats lost 63 seats and their House majority.

“Democrats have to fundamentally change the dynamics of this campaign season or we’re going to have 2010 again or perhaps even worse,” said Cornell Belcher, a Democratic pollster.

He praised Biden’s legislative proposals, but added, “Just passing things that people agree with does not necessarily stave off history in this case.”

The president’s team is interpreting this week’s election results as a reason to step on the gas rather than to tap the brakes.

“If voters are frustrated with inaction, the obvious response is to be more decisive and pass bills based on an agenda for the middle class that received a record-breaking 81 million votes last year,” said a White House advisor who requested anonymity to discuss political strategy. “And there’s a strong consensus about that across the party. Doing less is plainly the opposite of what people want.”

Sen. Richard J. Durbin (D-Ill.), the majority whip, told reporters that the loss in Virginia “should be an accelerant to our efforts.”

Biden’s agenda is split between two pieces of legislation. One is geared toward investing in infrastructure such as roads and bridges, and the other is focused on fighting climate change and expanding the social safety net. The president released a revised framework on the latter legislation last week before leaving for Europe in hopes of prodding negotiations toward a conclusion.

Biden is quick to remind reporters that he’s been written off before. Pundits read his presidential campaign its last rites before he captured the Democratic nomination last year, and they’re constantly checking for a pulse on his legislative agenda.

“You’ve all believed it wouldn’t happen from the very beginning, the moment I announced it, and you always seem amazed when it’s alive again,” he said. “Well, you may turn out to be right — maybe it won’t work. But I believe we’ll see by the end of next week, at home, that it’s passed.”

However, a final deal remains elusive. House Speaker Nancy Pelosi (D-San Francisco) told her caucus Wednesday that she was adding paid family and medical leave back into the legislation, even though Sen. Joe Manchin III (D-W.Va.), a key swing vote, has opposed the proposal.

Another unresolved issue is the cap on state and local tax deductions, known as SALT. Removing the cap would please wealthier Democratic voters in states such as California and New York, but progressives have opposed the proposal as regressive.

Sean Clegg, a Democratic strategist based in San Francisco, said that what ultimately cost McAuliffe the Virginia race is the “feeling that, OK, we gave you [Democrats] all the reins of power and you’re not delivering anything except a picture of internal, internecine squabbling.”

“All the forces that have been impeding getting visible progress done in the House and Senate need to cut it out,” he said.