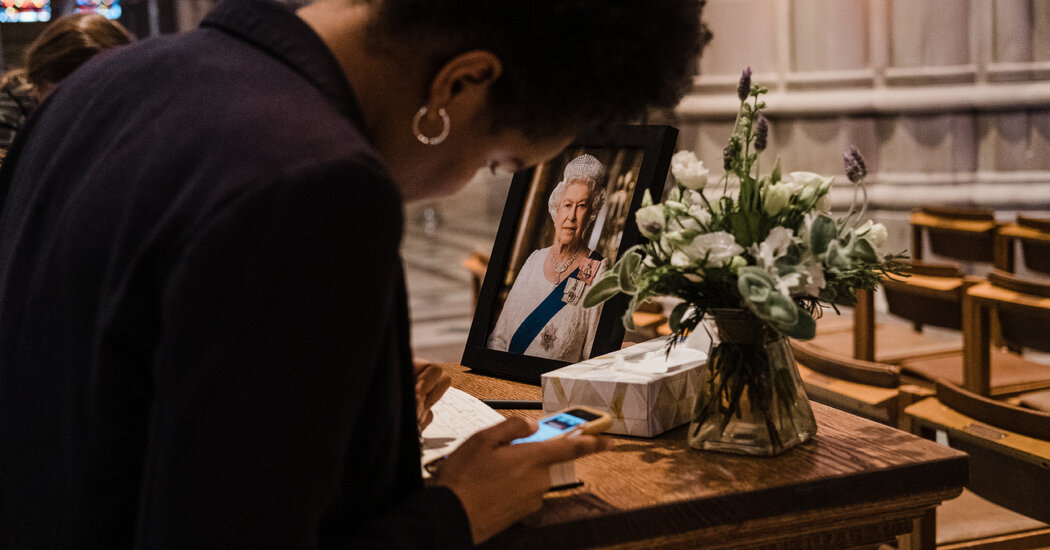 When the Republican Senator Lindsey Graham of South Carolina introduced a bill this month to ban abortions nationwide after 15 weeks, Democratic fund-raisers expected it to dominate news outlets like MSNBC, bringing small-dollar donations for candidates.

But they did not anticipate that cable news networks, overtaken by the death of Queen Elizabeth II on Sept. 8, would relegate politics to an afterthought for more than week in favor of ancient rituals, Grenadier Guards and the monarch’s corgis.

Suddenly, the traditional September influx of campaign cash slipped, which Democrats attributed in significant part to the round-the-clock coverage of the 10-day period of mourning for the queen that culminated in her funeral on Monday.

Democrats said that they relied on grass-roots donations — those under $250 — to compete with spending by Republican-aligned super PACs on television ads, particularly in battleground states.

Nat Binns, a principal for MissionWired, a digital fund-raising company that supports Democrats, said in an interview on Friday that he had never experienced such a vacuum of political news stories at this stage of the campaigns.

A historic visit. On May 18, 1965, Elizabeth arrived in Bonn on the first state visit by a British monarch to Germany in more than 50 years. The trip formally sealed the reconciliation between the two nations following the world wars.

First grandchild. In 1977, the queen stepped into the role of grandmother for the first time, after Princess Anne gave birth to a son, Peter. Elizabeth’s four children have given her a total of eight grandchildren, who have been followed by several great-grandchildren.

Princess Diana’s death. In a rare televised broadcast ahead of Diana’s funeral in 1997, Queen Elizabeth remembered the Princess of Wales, who died in a car crash in Paris at age 36, as “an exceptional and gifted human being.”

A trip to Ireland. In May 2011, the queen visited the Irish Republic, whose troubled relationship with the British monarchy spanned centuries. The trip, infused with powerful symbols of reconciliation, is considered one of the most politically freighted trips of Elizabeth’s reign.

Breaking a record. As of 5:30 p.m. British time on Sept. 9, 2015, Elizabeth II became Britain’s longest-reigning monarch, surpassing Queen Victoria, her great-great-grandmother. Elizabeth was 89 at the time, and had ruled for 23,226 days, 16 hours and about 30 minutes.

Marking 70 years of marriage. On Nov. 20, 2017, the queen and Prince Philip celebrated their 70th anniversary, becoming the longest-married couple in royal history. The two wed in 1947, as the country and the world was still reeling from the atrocities of World War II.

“The coverage of the queen disrupted that moment,” Mr. Binns said. “It feels almost like we have to start over to build it up.”

The clients of MissionWired include at least three Senate Democrats facing tough re-election campaigns that could determine whether the party maintains control of the Senate: Raphael Warnock of Georgia, Catherine Cortez Masto of Nevada and Maggie Hassan of New Hampshire. The company is also working for the Democratic Senatorial Campaign Committee, the Democratic Governors Association and Representative Val Demings, who is challenging Senator Marco Rubio in Florida.

During the 2018 midterm elections, the company had a monthly fund-raising bump of 133 percent in September, Mr. Binns said. This year, he noted, the increase is projected to be half as much.

“I have never seen revenue in a day in September go down,” Mr. Binns said, adding that he was speaking generally, not about particular clients.

In the nine days after the queen’s death, the digital fund-raising totals for Ms. Demings slipped about 60 percent compared with the last nine days of August, said Christian Slater, a campaign spokesman.

Laura Carlson, digital director for the Democratic Governors Association, said in an interview on Friday that the group’s fund-raising fell from the first to the second week of September, which was a departure from past totals.

“One of the factors that kept kind of coming up was the queen’s funeral,” she said. “It definitely hurt our projections.”

In the United States, more than 11 million people watched the queen’s funeral on broadcast and cable television networks on Monday, according to Nielsen, the research firm known for its television rating figures. The total did not include those who used streaming services.

“It’s also kind of a spectacle in the way that political news isn’t,” Deborah L. Jaramillo, an associate professor of film and television at Boston University, said in an interview on Friday.

Professor Jaramillo, who is working on a book about how death is portrayed on television, said that nonstop coverage of the queen’s funeral was less costly for cable news networks and underscored their tendency to cover highly visual events.

It was not clear whether the scaled-back political coverage also took a financial toll on Republican fund-raising committees. Campaign finance reports for the period that includes the queen’s death are not yet available. Those supporting Republicans for the Senate and the House did not respond to requests for comment on Friday.

David Bergstein, a spokesman for the Democratic Senatorial Campaign Committee, said in an interview on Friday that small-dollar donations were critical for the party.

“Grass-roots support for our campaigns is the strongest, most effective way we can counter the wave of G.O.P. super PAC spending,” he said. “We need Americans who care about the future of our country to pick a race they care about, get involved and stay active in the final month.”

Sometimes the death of a famous person can have the opposite effect on fund-raising. When Justice Ruth Bader Ginsburg, the second woman appointed to the Supreme Court, died in September 2020, Democrats received a surge in grass-roots donations, said Mr. Binns, the digital fund-raiser. But this year, he said, the queen’s death has created a sense of urgency.

“We are running out of time,” he said.