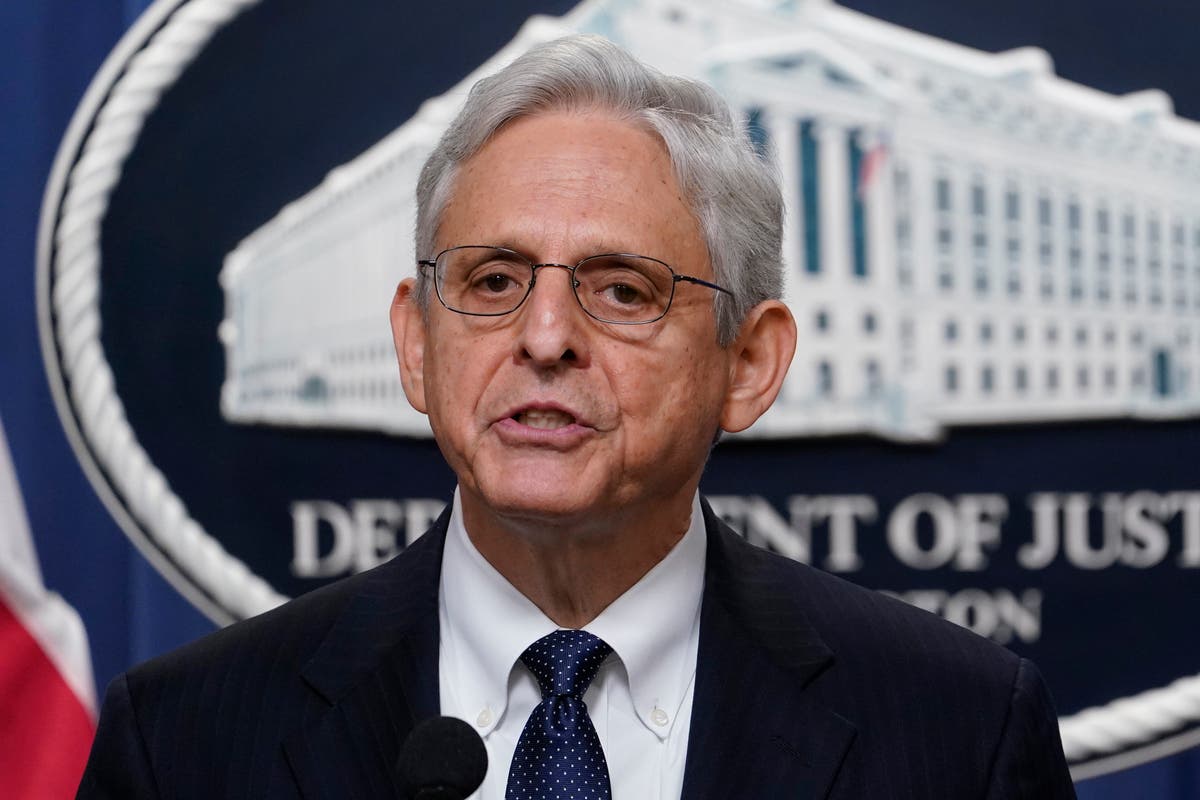 TRUMP-FBI — Former President Donald Trump is calling for the “immediate” release of the federal warrant the FBI used to search his Florida estate. The Justice Department had asked a court to unseal the warrant earlier Thursday, with Attorney General Merrick Garland citing the “substantial public interest in this matter.” By Eric Tucker and Michael Balsamo. Sent: 1,130 words, photos, video.

CONGRESS-BUDGET — A flagship Democratic economic bill is perched on the edge of House passage, which would hand President Joe Biden a back-from-the-dead triumph on his climate, health care and tax goals. Democrats hope that will energize voters ahead of November’s congressional elections. By Alan Fram. SENT: 960 words, photo. UPCOMING: 1,100 words after House vote, timing uncertain. With CONGRESS-BUDGET-HIGHLIGHTS — What’s in the bill. 1,100 words, photos.

AFGHANISTAN-ONE-YEAR-LATER-GIRLS — For most teenage girls in Afghanistan, it’s been a year since they set foot in a classroom. With no sign the ruling Taliban will allow them back to school, some are trying to find ways to keep education from stalling for a generation of young women. By Rahim Faiez and Siddiqulllah Alizai. SENT: 1,130 words, photos. AFGHANISTAN-ONE-YEAR-LATER-GIRLS-TIMELINE — Timeline of events in Afghanistan since Taliban takeover (sent).

KANSAS-ABORTION VOTE — An increase in turnout among Democrats and independents and a notable shift in Republican-leaning counties contributed to the overwhelming support of abortion rights last week in traditionally conservative Kansas, according to a detailed Associated Press analysis of the voting results. By Aaron M. Kessler, John Hanna, Nuha Dolby and Heather Hollingsworth. SENT: 1,150 words, photos.

EUROPE-DROUGHT — An unprecedented drought is afflicting nearly half of the European continent and is damaging farm economies, forcing water restrictions and threatening aquatic species. Water levels are falling on major rivers such as the Danube, the Rhine and the Po. There has been no significant rainfall for almost two months in Western, Central and Southern Europe. And the dry period is expected to continue in what experts say could be the worst drought in 500 years. By Sylvie Corbet and Nicolas Garriga. SENT: 1,090 words, photos.

RUSSIA-UKRAINE-WAR-DAIRY-FARM — One of the last working dairy farms on Ukrainian-controlled territory in the eastern Donbas region is doing everything it can to stay afloat in a place where neither workers nor animals are safe from Russia’s devastating war. SENT: 780 words, photos.

ANNE HECHE-CRASH — Police say that they are investigating actor Anne Heche for driving under the influence of drugs after a fiery crash into a Los Angeles house that left her with critical injuries. SENT: 430 words, photos.

INDIANA MALL SHOOTING — Data cannot be recovered from the laptop of the 20-year-old man who allegedly shot five people in a suburban Indianapolis shopping mall, killing three of them, the FBI says. SENT: 250 words, photos.

GETTY-ART-ETURNED — The J. Paul Getty Museum in Los Angeles is returning ancient sculptures and other works of art that were illegally exported from Italy, the museum announced Thursday.

MISSING-GIRL-NEW-HAMPSHIRE — Authorities say the search for a New Hampshire girl who disappeared at age 5 in 2019 but was not reported missing until late last year is now considered a homicide investigation. New Hampshire Attorney General John Formella said Thursday that authorities have concluded that Harmony was murdered in December 2019. SENT: 480 words, photo.

ELECTION 2022-SENATE-PENNSYLVANIA — Pennsylvania Senate candidate John Fetterman is expected to open up about his personal health challenges as he officially returns to the campaign trail, more than 90 days after the Democrat suffered a stroke that threatened his life and political prospects in one of the nation’s premier Senate contests. By Steve Peoples and John Wawrow. SENT: 650 words, photos. UPCOMING: 990 words after 5:30 p.m. event.

FBI-OFFICE-THREAT — Authorities are investigating the motives of an armed man who they say tried to breach the FBI’s Cincinnati office, fled and died hours later in a rural standoff with law enforcement, a case unfolding as the FBI warns agents to take extra precautions amid increased social media threats to its employees and facilities. SENT: 500 words, photos.

VIRUS-OUTBREAK— The nation’s top public health agency is relaxing its COVID-19 guidelines and dropping the recommendation that Americans quarantine themselves if they come into close contact with an infected person. SENT: 770 words, photos.

GEORGIA-ELECTION-INVESTIGATION — Donald Trump has hired a prominent Atlanta criminal defense attorney known for defending famous rappers to represent him in matters related to the special grand jury that’s investigating whether the former president illegally tried to interfere with the 2020 election in Georgia. SENT: 590 words, photo.

CAPITOL RIOT-POLICE OFFICER — An off-duty Virginia police officer who stormed the U.S. Capitol with a fellow officer is sentenced to more than seven years in prison, matching the longest prison sentence so far among hundreds of Capitol riot cases. SENT: 850 words, photo.

SEVERE-WEATHER-APPALACHIA — Gov. Andy Beshear has complained that the Federal Emergency Management Agency is denying too many requests for assistance in flood-ravaged eastern Kentucky, and urged those getting turned down to take their cases directly to agency representatives in the region. SENT: 830 words, photos.

CALIFORNIA’S-LAST-NUCLEAR-PLANT — The California Legislature has less than three weeks to determine if it will take an extraordinary step and attempt to extend the life of California’s last operating nuclear plant, a decision that would be made amid looming questions over the cost and who would pay and earthquake safety risks. SENT: 690 words, photos.

HAWAII-WILDFIRE — A large wildfire in a rural area of Hawaii’s Big Island is not threatening any homes, but high winds and extremely dry conditions are making it difficult for crews to contain the blaze. SENT: 500 words, photos.

UNDERGROUND FIRE-LANDFILL — Missouri’s health department on Thursday announced findings of a lengthy examination of the troubled Bridgeton Landfill in suburban St. Louis, determining that the foul odor emitting from the landfill created health problems but did not increase the risk of cancer. SENT: 480 words, photos.

CHINA-LATVIA-ESTONIA-DIPLOMACY — Latvia and Estonia say they have left a Chinese-backed forum aimed at boosting relations with Eastern European countries, in what appears to be a new setback for China’s increasingly assertive diplomacy. SENT: 860 words.

SCI-MOTH-MIGRATION — Scientists in Germany attached tiny trackers to giant moths looking for clues about insect migration. In a study, researchers followed moths around in a small airplane to map out their journeys. They found that the moths flew in straight paths and used different strategies to deal with changing wind conditions. The research suggests that the moths have strong navigation skills, challenging earlier ideas that migrating insects are mostly getting blown around by the wind. SENT: 620 words, photos.

VIRUS-OUTBREAK-TESTING — New U.S. recommendations call for three home tests for people exposed to COVID-19 to improve accuracy. Previously, the Food and Drug Administration had advised taking two rapid antigen tests over two or three days to rule out infection. But the agency says new studies suggest that protocol can miss too many infections. SENT: 280 words, photo.

VIRUS-OUTBREAK-J&J-VACCINE-FACTORY — Congressional panel leaders say an additional 135 million doses of Johnson & Johnson’s COVID-19 vaccine from a troubled Baltimore factory will have to be destroyed due to quality problems. SENT: 300 words.

SOUTH-KOREA-SAMSUNG — South Korea’s president will pardon Samsung heir Lee Jae-yong with a year left on his sentence for bribing a president as part of a massive corruption scandal that toppled her government, the justice minister has announced. SENT: 870 words, photos.

FINANCIAL MARKETS — Shares were mixed in Asia after a muddled day on Wall Street, where benchmarks meandered following another encouraging report about inflation. Tokyo’s Nikkei 225 surged 2.6%, catching up on gains after being closed Thursday for a holiday. Hong Kong and Seoul also advanced, while Shanghai and Sydney declined. U.S. futures edged higher and oil prices fell. SENT: 680 words, photos.

FILM-REVIEW-DAY-SHIFT — This year marks the centennial anniversary of F. W. Murnau’s “Nosferatu,” a long time for us humans but only a blip for vampires. If you were looking to celebrate the birthday of that silent classic, which still casts a long and ominous shadow over all vampires films that have followed, you could do it with what’s perhaps its exact opposite: the new Netflix action-comedy “Day Shift,” with Jamie Foxx as a San Fernando Valley vampire hunter. SENT: 620 words, photos.

JERRY HALL-RUPERT MURDOCH DIVORCE — Model and actor Jerry Hall and media mogul Rupert Murdoch have agreed to the terms of their pending divorce, her attorney said Thursday. Hall filed a request in Los Angeles Superior Court on Wednesday to dismiss her original petition for divorce from Murdoch, which she filed last month, with permission to file a new one. SENT: 155 words, photo.

FBN–TITANS-RAVENS — Tyler Huntley went 16 of 18 for 110 yards and a touchdown in the first half, and the Baltimore Ravens extended their record streak of preseason victories to 21 with a 23-10 win over the Tennessee Titans. By Noah Trister. SENT: 600 words, photos.

NBA-RUSSELL’S-NUMBER — Bill Russell’s No. 6 jersey is being retired across the NBA, a first for the league. The league and the National Basketball Players Association announced Thursday that the number worn by the 11-time champion, civil rights activist and person good enough to be enshrined in the Basketball Hall of Fame as both a player and a coach was being permanently retired by all 30 teams. SENT: 600 words, photo.

HOW TO REACH US