MSNBC host fawns over Fauci as he vows not to leave his job: ‘You make us smarter and safer’ 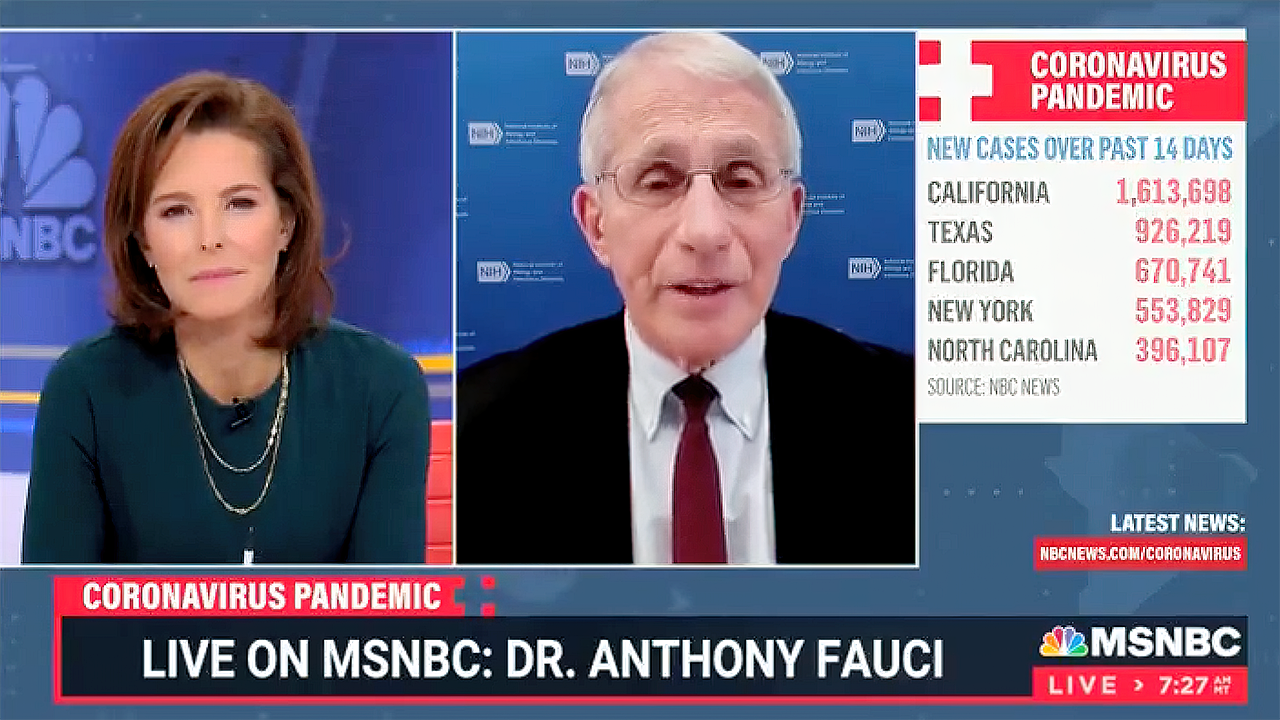 MSNBC host Stephanie Ruhle made no effort to hide her affection for Dr. Anthony Fauci Monday as she fawned over his decision to continue serving in his current role.

During an appearance by Fauci on “Stephanie Ruhle Reports,” Ruhle suggested Americans opposed to vaccines were “dangerous” and praised Fauci for making Americans “smarter and safer and better every day.”

“I have to ask you about how dangerous the anti-vax movement is because it’s not just about getting the shot. Two weeks ago in a congressional hearing you went into detail about the threats you face every day. Again, just yesterday, we heard these people go after you, go after President Biden. Are we underestimating how dangerous, how potentially violent this anti-vax movement is? And what’s it like for you day after day?” Ruhle began the topic by asking Fauci.

Fauci answered that the number of people falling for the misinformation surrounding vaccines was “disturbing,” and that he had been “villainized” because of his efforts to fight that misinformation.

Ruhle followed up by asking if it made him want to leave his job.

MSNBC’S STEPHANIE RUHLE RIPS DOLLAR TREE FOR BLAMING PRICE HIKES ON INFLATION: THEY DON’T ‘NEED’ TO DO THIS

“Obviously it’s very stressful on my family, my wife, and my children, the continual attacks, and the ad hominems that are related to nothing but pushing back on the public health principles that I talk about. But this is too important. This is the kind of thing that I’ve devoted my entire career, but certainly over the last 40-plus years in public health, science and medicine, and we are in a crisis right now and there’s no chance I’m going to walk away from this. This is something that’s too important,” Fauci answered.

“Well, I am sincerely appreciative that you are not walking away from this post. You make us smarter and safer and better every day. Thank you so much, Dr. Fauci,” Ruhle said.

Ruhle’s affinity for Fauci joined other figures within the liberal media who’ve praised him for his work since the outbreak of the coronavirus pandemic, in spite of the troubled federal response and mixed messaging that have marked the last two years.

MSNBC’s Nicole Wallace praised Fauci in June after the leaking of his emails showed his personal beliefs didn’t match guidance being given to Americans regarding the pandemic and was repeatedly warned about the possibility of the lab-leak theory that he publicly called far-fetched at the time.

“The true mark of someone is if they look good, even when their personal emails come out. So you passed the test that very few of us would pass,” Wallace told him.