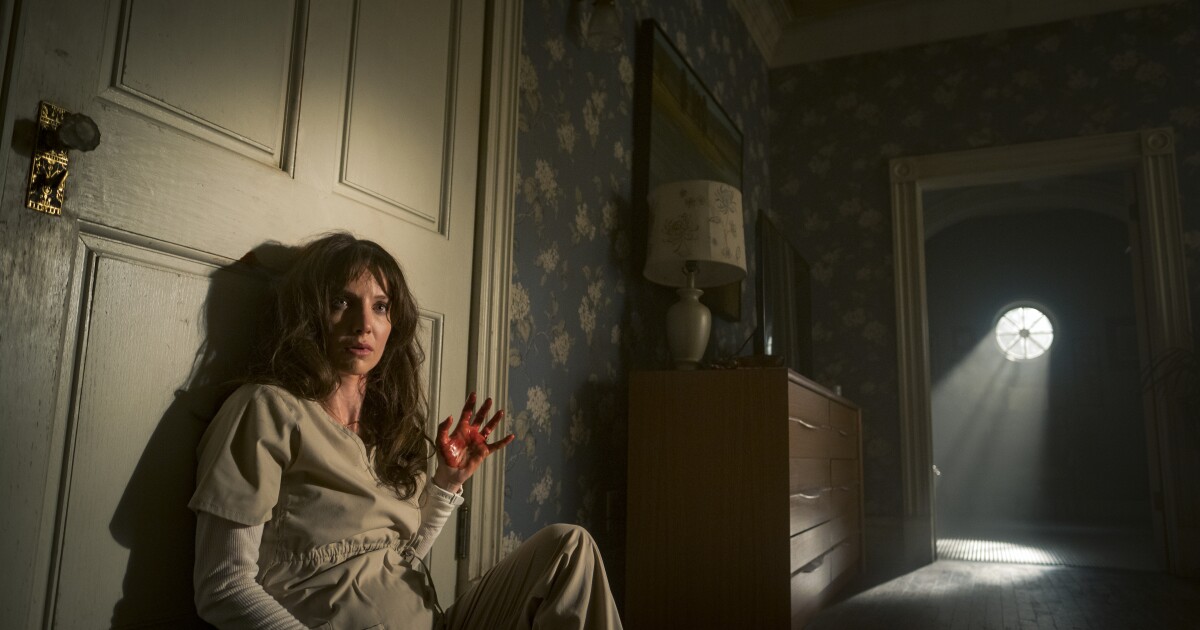 Written by Akela Cooper and based on a story by Wan, Cooper and Ingrid Bisu, “Malignant” (now on digital and premium VOD and heading to Blu-ray Nov. 30) stars Annabelle Wallis as Madison, a woman plagued by grisly visions of a serial killer in a leather trench coat as brutal murders begin piling up around Seattle.

That’s just the start of a twisty plot that escalates to operatic heights of terror, absurdity and intrigue, spiritually returning Wan to the indie genre roots of his early films while pushing the boundaries of modern mainstream horror. Not to mention adding a fiendish new fashion icon to your Halloween costume vision board! If you missed “Malignant,” it’s time to add it to your must-watch list.

Given that Wan’s “Saw,” “Insidious” and “Conjuring” horror franchise installments routinely cross the $100 million mark, it can be tempting to reduce the $33.2 million worldwide-grossing “Malignant” — originally set for a summer 2020 release pre-COVID, then shifted to a hybrid debut in theaters and on HBO Max last month — to a rare commercial stumble. Taking a brief detour from directing tentpoles, he swings for the fences with R-rated slasher violence and nods to Italian thrillers, Gothic Hammer horror and lurid 1980s and ‘90s B movies in a film far zanier than his recent successes.

But for Wan, a horror nerd who launched his career with the brutal “Saw” films alongside fellow Australian Leigh Whannell, and one of the most prolific makers of studio genre fare today, “Malignant” also offered something supremely enticing: the chance to do something unexpected.

“I’ve become very synonymous with the horror genre, so I know there’s a lot of expectation around the kind of movies I put out,” says Wan, video-chatting from London, where he’s directing “Aquaman and the Lost Kingdom,” the sequel to his $1.1 billion-grossing 2018 blockbuster for Warner Bros., which also distributed “Malignant.” “But I hate being pigeonholed. So for me, it was about breaking the expectations that I know people have of me.”

Wary of being known as “the jump-scare guy” and “the ghost-in-a-haunted-house guy,” Wan set out to break out of his own brand. He quietly filmed “Malignant” in Los Angeles between big-budget “Aquaman” pictures. When it was released in September, positioned as a moody domestic mystery-thriller with a marketing campaign that obscured its spoilery twists and turns, the risky and radical “Malignant” sailed past average audiences but engendered affection and viral rewatchability from genre fans hungry for something fresh and unpredictable.

“I grew up on ‘80s horror movies,” Cooper says. “I want to see those. So seeing the reactions of people who are like, “Holy s—, this movie just went off the rails in Act 3!” and they enjoyed it — that was the point. This is what horror is missing.”

If you pick up on what the film is putting down, the fun of “Malignant” is infectious, from its head-spinning tonal shifts to brutal kills to the campy flourishes that wink from the rafters. Its tiniest details are some of its most bizarrely delightful, evidence of Wan & Co. having a blast. The way one character inexplicably parks her car comically close to a cliff’s edge? “I take full responsibility for that,” Wan laughs.

Another Wan special: the superhuman accuracy displayed by “Malignant’s” antagonist as he hurls a desk chair into the air and across a massive room, knocking out two running targets like an Olympian discus thrower — a moment not in Cooper’s original script and another “bread crumb” that clues viewers in as to what kind of movie they’re watching.

“There are some things you write and then James will direct and it’s like, ‘Oh, James was having fun that day,’” Cooper says with a smile. “Never in my wildest dreams would I have written that our villain flings a chair across the room, WWE style.”

“Malignant” first gestated when Wan and Bisu, who are married, started bouncing around an idea of hers while at home with their dogs. “I was always obsessed with medical anomalies and the idea of parasitic twins,” says Bisu, a Romanian-born actor (“Toni Erdmann,” “The Nun,” “Conjuring 3″), who also executive produces and appears in “Malignant” as a lovelorn crime scene technician named Winnie.

They laid out a rough story treatment with character and plot points and ideas that would later become a showstopping action sequence set in a jail cell and police station. Cooper, who had written the upcoming horror-thriller “M3GAN” and is currently scripting “The Nun 2″ for Wan’s Atomic Monster production company, came in to meet with the pair. Bisu asked: “Have you heard of a teratoma?”

Cooper had grown up on a Missouri farm devouring Stephen King novels like “Pet Sematary” until the sun came up. Watching ‘80s horror with her family — movies like “A Nightmare on Elm Street,” “Hellraiser II” and “Pumpkinhead” — also left its mark on her young imagination and sent her on a path toward writing fantastical genre and horror stories. “I saw ‘Aliens’ in theaters sitting on my mom’s lap,” says Cooper via a computer surrounded by movie monster collectibles.

She clicked with Wan and Bisu, and was indeed familiar with teratomas — a friend had undergone surgery to have one removed. Cooper added emotional layers to Madison’s journey as a woman facing domestic abuse and a string of miscarriages but who also finds love and support in her relationship with her adoptive sister, Sydney (Maddie Hasson).

“Akela took everything that we laid out and she had to flesh it out,” says Wan. “She found the heartbeat of what Madison went through.”

For inspiration, Cooper looked to Irvin Kershner’s “Eyes of Laura Mars” (1978), starring Faye Dunaway as a photographer who sees visions of brutal slayings, and George A. Romero’s 1993 King adaptation “The Dark Half,” which finds a novelist at odds with his alter ego. Putting script to screen, Wan, cinematographer Michael Burgess and composer Joseph Bishara borrowed heavily from the stylized films of Dario Argento and Mario Bava, wearing their genre influences on their sleeves.

“I thought I would be doing a lot of trickery to pull it off,” says Wan, who experimented with puppetry and reverse playback before body performer and contortionist Marina Mazepa was cast to pull off Gabriel’s physical action, backwards. “She literally was able to do like the entire fight scene — I kid you not — in reverse choreography,” says Wan, excitedly pulling out his phone to share a behind-the-scenes peek.

Leaning into the exhilaration of “Malignant” felt right, despite an original finale that was much bleaker and didn’t leave much room for a sequel. “That ending was really powerful,” Bisu says, “but we felt like [Madison] deserved a happier ending.”

Listening to her instincts in another sense also left Cooper feeling empowered. Encouraged by Wan to write Det. Kekoa Shaw (George Young) and Det. Regina Moss (Michole Briana White) as people of color, Cooper was happy to see them both survive to the end. “A lot of times as a Black writer and for writers of color, you are bracing for an argument,” Cooper tells me a few days later during a Nightstream Film Festival Q&A. “Obviously James and I growing up, we didn’t get to see a lot of ourselves in horror movies — and if we did, they were the first one to die, or I ended up sacrificing myself to save the white lady.”

“Now, though, as I’ve gotten more experience and as I’m writing more mainstream [projects], I just go ahead and make the characters characters of color,” continues Cooper, who has several film and TV projects in development and is a co-executive producer on the upcoming Paramount+ series “Star Trek: Strange New Worlds.” “And they live.”

Hollywood needs more movies that take chances, says Wan, who hopes that “Malignant” might help persuade even just a few execs to crack the door open for new kinds of horror.

“I hear directors, once they’ve got to a certain level, they talk about wanting to make that movie again, like they did when they started out, to take big swings again,” he says. “But then they never do, because they are afraid to.”

“And maybe I should be afraid. Maybe it’ll come back to haunt me and my career in some ways. But you know what? I’m glad to see the reactions [to ‘Malignant’]. It makes me think that I took a big swing and that it’s a good thing. Otherwise people like me will continue to keep just making safe films. And I don’t want to do that.”