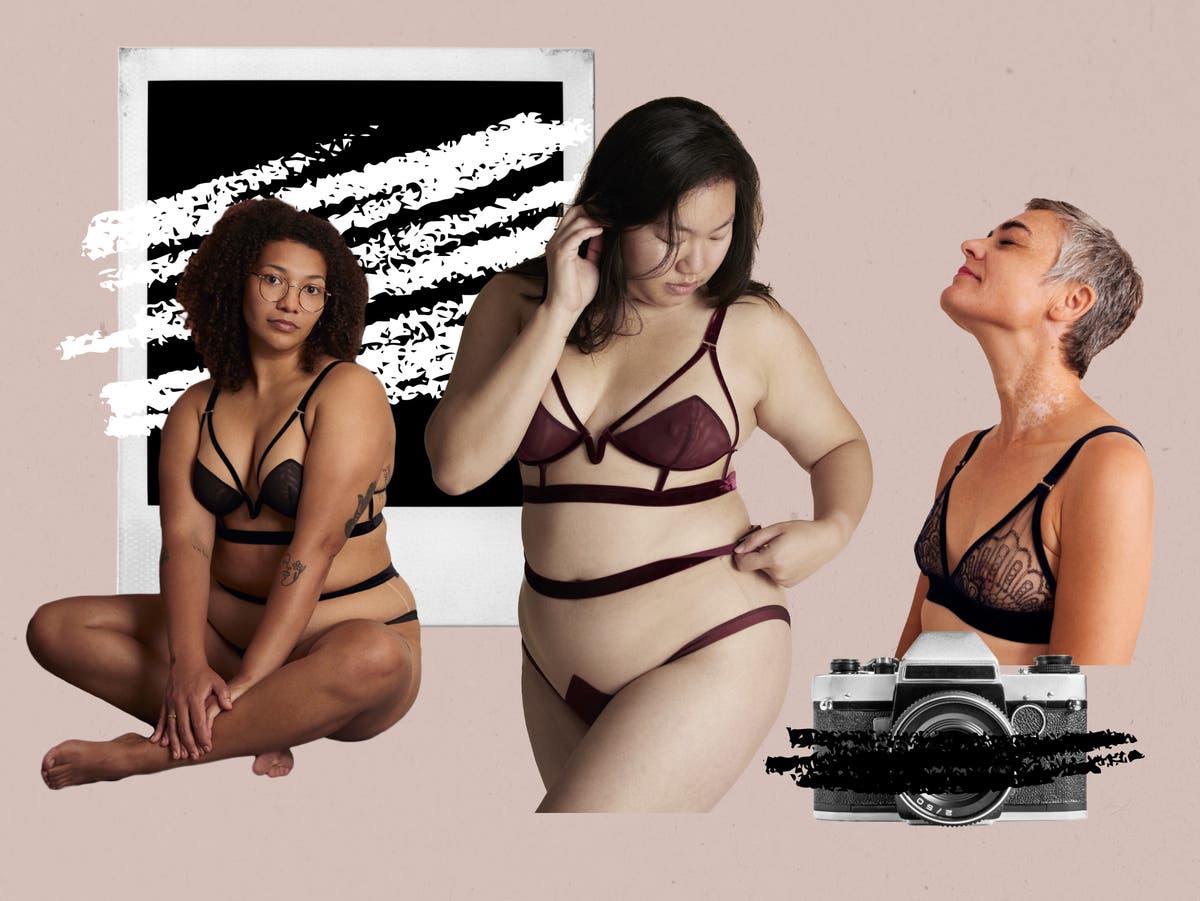 I am standing in a small, softly lit studio, following the gentle instructions of a photographer who has never seen me before today. I am dressed in a luxurious mesh and velvet lingerie set and nothing else, not even a lick of mascara on my eyelashes or a hint of blusher. It’s the most exposed I’ve ever been in the company of strangers. I feel oddly uninhibited.

I sway to the music playing in the background, point my feet and smile. The photographer, Manon Ouimet, has a confident but unintimidating presence and directs me into different poses and angles while telling me I’m a “natural”.

Of course, I’m not. I’ve never done any modelling work before, and neither have the three other women waiting their turn to be photographed for this lingerie campaign.

This is an “anti-casting” shoot for lingerie brand The Underargument. Dreamt up by founder Maina Cisse, anti-casting is essentially blind casting, that sees her promote her products by crowdsourcing models, asking women from all walks of life to send in, not a photograph of themselves, but a written personal piece about their relationship with their body.

Cisse landed on the idea after being fed up with seeing endless perfect models advertising lingerie that didn’t reflect any women she knew. Her collections are designed to make women feel empowered, with names like ‘For identity//Against stereotypes’, ‘For sexy//Against sexism’ and ‘For loving//against conforming’. The Underargument’s pieces are not your average cotton bras and pants – Cisse makes use of lace and mesh so delicate, it hardly feels like anything on the skin. The garments fit well without digging or pinching, and take to different body types with ease.

I first saw the anti-casting call while scrolling idly through Instagram one day in lockdown. I followed the brand as I had already purchased a set from The Underargument. The brand seeks anyone choosing to share their story to submit it, with nothing else required. No photos, no measurements, no modelling experience.

Intrigued and with nothing to lose, I submitted my story and promptly forgot all about it until last September, when I got an email with the title: “You are selected!”

The coronavirus pandemic delayed plans for the shoot until October 2021, when Cisse sent round a call sheet telling the “models” where to go and to come looking “very natural or no makeup”. Up to this point, I still had not been asked for a single photo of myself, only my measurements so that Cisse could bring the right sizes for the shoot.

It was the opposite of everything I know about the modelling and fashion industry, a flash-filled world where beautiful people are chosen precisely because of how they look.

“It used to be so uninspiring with regular models,” Cisse tells me when we meet over Zoom a week before the shoot. “No shade to them, because it’s a legitimate job. But getting to hear the stories of real people has been such a privilege and a gift, and every time I do one of these shoots, I get butterflies.”

The idea of an anti-casting feels especially inspiring at the moment, because of how rife discrimination and under-representation is in the fashion industry. In July, a report by the All-Party Parliamentary Group for Textiles and Fashion found that that nearly 90 per cent of people surveyed felt fashion industry images did not represent a spectrum of different bodies and identities, and 87.5 per cent said they did not feel represented in advertising campaigns, fashion shoots, and on the catwalk.

The report also found that 68 per cent of people had experienced or witnessed discrimination in the fashion industry. The largest majority (73.4 per cent) said this was based on body image, followed by ethnicity, age, disability, gender and religious expression.

As a barely 5’3”, bouncing-between-UK-size-14-and-16 Southeast Asian woman, I know all too well how often I see someone like myself in a fashion ad – which is to say, never.

When I arrived at the shoot, it was clear that the other women being photographed on the same day, whose ages ranged between late 20s to mid-60s, felt the same way.

Lou, 65, told me during our shoot: “I rarely see older women who look like myself modelling anything. Even brands whose demographic is older women have started using much, much younger models. It’s demoralising. I feel it is all the more important that I do this shoot, to represent women like me.”

This is the overarching message that Cisse and Ouimet want to send to the fashion industry: that there is value in putting real people in their clothes, not just an idealised version of perfection that is unattainable for the vast majority. Ouimet tells me she used to be involved in fashion photography but became “frustrated” with the industry’s ideas of perfection. “The world around me isn’t perfect, it isn’t what you see in fashion campaigns. I had a real desire to focus on the human condition and eke out positivity in each person,” she says.

“When Maina came to me with the idea for the anti-casting, I was very much open and eager to do something like this. It’s very foreign as a photographer to not have any inkling on how your subject will look, but it’s a really beautiful challenge. It became very obvious and pertinent that it wasn’t just about capturing the underwear, but about the experience of the women who came to the shoots.”

Very little editing takes place in post-production, apart from adjusting the photographs for colour and light. The resulting images as depict “raw beauty”, says Cisse. “These are women who are comfortable in their skin, who have powerful stories to tell about how they got to this point, and you see it through the photographs we take. It’s almost magic.”

I wonder if there is space for this concept in the wider fashion world. Olivia Igwe, a confidence mentor who specialises in fashion, took part in the anti-casting shoot last year. She says that there is space in the British fashion industry for this sort of approach and believes that shoppers would embrace it. “I think people want it more than ever now.”

Igwe points towards fashion house Alexander McQueen’s Spring 2022 runway show in London earlier this month, in which a number of women walked who weren’t professional models, as proof that the industry is ready to embrace the concept of using real people as models.

“It made you focus on the individual,” Alexander McQueen creative director Sarah Burton told US Vogue at the time. “It became about this community of women, and how these clothes look on women. I made clothes for them as people […] It’s about treating each of them as an individual and enhancing their personality, and how they feel. It’s about being sensitive.”

Cisse is slightly more skeptical. She isn’t sure if people are ready to see so much diversity in fashion, even if they do want it, because of the way beauty standards are so ingrained in society. “I am hopeful, of course, that things like the anti-casting shoot will change people’s minds, and maybe it will. But it will take time, especially in the hyper-beauty standards world we live in right now.”

She looks towards one of the other women posing for Ouimet, with a big smile on her face. “I feel like I am doing something right, though,” she says. “I might get tired organising these shoots, but every time I’m here, I just feel like this is what I’m meant to do.”

Cisse also acknowledges that anti-casting might not work for every brand. As a small independent brand, she does not pay the crowd-sourced models, instead letting them take home the lingerie sets they model in the shoots and providing them with travel expenses.

I went into the shoot feeling self-conscious and nervous, worried about various parts of me I saw as physical flaws: tummy rolls, cellulite, double chin, too short, flyaway hair, blemished skin. But I left on an adrenaline high, as though I’d just accomplished something important. It was difficult to put my finger on why, until I thought of how I would feel if I saw someone who looked just like me on a lingerie website.

How inspiring it would be to be able to see exactly how a garment might look on my body, instead of guess work and inevitable disappointment. More importantly, I would feel like my body is worthy of being seen.

And yet, when I first saw the images I couldn’t help but feel a little dejected.. I had somehow imagined the shoot would make me appear taller and slimmer, so was disappointed when faced with the reality of my figure. So used, was I, to seeing impossibly slim models advertising lingerie, that I was unable to appreciate myself.

But after mulling them over for several days what I now see is a young, healthy woman who is happy and more comfortable in herself than I had realised. And I’m especially proud to have taken part in something that other women like me will see themselves reflected in.

“We all want to see ourselves out there, a representation of ourselves, to feel we can connect to the person we’re looking at,” Ouimet says. “But we’ve been so ingrained with this false sense of truth. It’s going to take some breaking down and for more women to get involved in shoots like this… Everyone should get involved.”