The surprising story of how ABBA became beloved gay icons 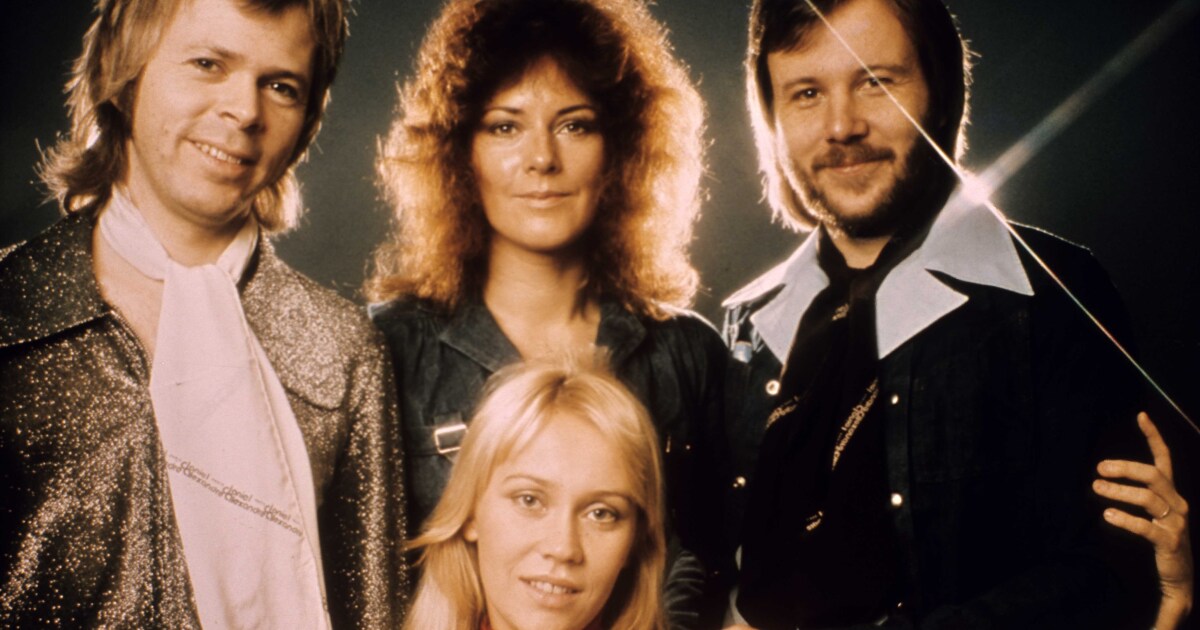 Somewhere, right now, ABBA’s “Dancing Queen” is playing at an LGBTQ club, bar or house party. Gays (and their lucky straight friends) are waving their arms, striking ingenue poses and shamelessly singing along to the sugary 45-year-old pop standard that’s become synonymous with queer nightlife. It’s our variation on what fans do at ballgames when their team is winning, but with a camp exuberance ignited by the song’s brassy harmonies and handy references to feminine royalty. Trump and his followers may have for a time claimed both the Village People’s “Y.M.C.A.” and “Macho Man” for themselves, but there’s no way they’ll take this one from us.

Thanks to multiple stage and screen incarnations of “Mamma Mia!,” fabulously garish costumes from gay designer Owe Sandström and consummately crafted songs more retroactively popular than in their ’70s and early ’80s heyday, ABBA has for decades been the bull’s-eye of the LGBTQ musical universe. Ostensibly cheerful but packed with drama and peppered with Scandinavian melancholy, the Stockholm mixed-gender quartet’s pop has blueprinted the glitz of countless gay and gay-friendly acts from Kylie Minogue to Lady Gaga, Adam Lambert to Lil Nas X — a singular achievement for a band that hadn’t completed an album in 40 years. This week releasing “Voyage,” its first new LP since 1981 and a teaser for next year’s London concerts featuring 3D avatars, ABBA is to many gay fans what the Rolling Stones are to straights — archetypes whose appeal transcends time, place and age. While even icons like Madonna polarize opinion, nearly every color of the gay rainbow agrees on ABBA.

This wasn’t always the case. Back when Donna Summer reigned as indisputable dancing queen, ABBA didn’t get much gay club play, not even you-know-what: Disco’s top mixer, Tom Moulton, considered “Dancing Queen” perfect as is and so he turned down the chance to remix it. (He’s since regretted this.)

From the earliest subterranean clubs to Studio 54, the LGBTQ-friendly discos of the ’70s were powered by Black and Latin grooves. Yes, there were exceptions: Larry Levan — the influential gay Black DJ at New York’s legendary and largely Black/LGBTQ Paradise Garage — adored Cher’s “Take Me Home.” But gay DJs and their audiences mostly favored underground divas and obscure orchestral maestros they discovered and popularized, not successful pop acts plucked from AM radio.

Things changed in the early ’80s when the U.S. mainstream, media and record companies alike declared disco dead. This challenged DJs who since 1977’s “Saturday Night Fever” had a rhythmic deluge from which to draw. Straight clubs shifted to eclectic funk and new wave, but the well of speedy gay dancefloor arias nearly ran dry. Raul Rodriguez — DJ at the nightclub New York, New York — came up with an ersatz solution when he extended ABBA’s 1980 album track “Lay All Your Love on Me” in his home studio with tape and razorblades. “BAM BAM BAM” go his particularly percussive edits. “The first time he did that, it was a mistake,” recalls Robbie Leslie, DJ veteran of the Saint, the ultimate ’80s gay disco. Rodriguez turned his splicing goof into a thunderous attention-grabber that packed the air with pumping fists and poppers alike.

Like Leslie’s similarly beloved mix of Jimmy Ruffin’s “Hang on to My Love,” Rodriguez’s ABBA transformation only appeared on Disconet, a gay-owned subscription remix service. One couldn’t just walk into a store and buy it: In those pre-streaming days, you could only hear it at clubs like the Saint, where it remained in rotation for years. This forced a 12-inch release overseas of “Lay All Your Love on Me’s” comparatively ordinary LP cut that preserved the exclusivity of Rodriguez’s version, while its longevity proved that dancers — particularly gay ones — still craved fast and lusty club anthems. In 1982, ABBA’s North American label issued its kindred uptempo tune “The Visitors” as a single, but once again, a gay subscription-only remix service, Hot Tracks, supplied the extended version.

After ABBA that year recorded what would be for decades its final sessions, UK producers like Stock Aitken Waterman filled the void with initially gay-targeted “hi-NRG” tracks that crossed into the mainstream via Dead or Alive, Bananarama, Minogue and Summer herself, while everyone from the Latin Rascals to the Pet Shop Boys replicated Rodriguez’s machine-gun edits.

When hi-NRG ran its course, England’s Erasure released 1992’s “Abba-esque,” a love-letter of cover versions. Its gay lead singer Andy Bell and his straight synth sidekick Vince Clarke even recreated their source material’s “Take a Chance on Me” video in drag, with UK chart-topping results. The originals appeared on that year’s “ABBA Gold,” now one of the biggest sellers of all time. In 1994, these oldies prominently popped up in the movies “Muriel’s Wedding,” which gave gay fave Toni Collette her big break, and “The Adventures of Priscilla, Queen of the Desert,” a trans-tastic road comedy. At the absolute nadir of the AIDS plague, ABBA was reborn into paragons of gloom-relieving kitsch.

But if bombastic outfits and bubblegum hooks had been the only gear ABBA gave to LGBTQ culture, its gay appeal would’ve plummeted after the lifesaving arrival of antiviral cocktails. Beneath the sheen of satin and sequins, ABBA has always layered conflicts and contrasts to rival those of the most lauded singer-songwriters. Time after time they made counterintuitive matches — fortified instrumentation juxtaposed against romantic surrender (“Waterloo”), crestfallen lyrics paired to a bouncy melody (“Mamma Mia”), strong choral harmonies capturing moments of solitary weakness (“SOS”), catchiness while cracking up (“The Visitors”) — the contradictions go on and on and on.

The sounds queer connoisseurs champion often celebrate and reconcile these discrepancies. Consider how the Supremes joyously embodied emotional enslavement while soundtracking both civil rights and Stonewall. Or Laura Nyro, who ruled AM radio via streamlined covers by the 5th Dimension and others while her own complicated albums turned her into an LGBTQ cult hero well before she settled down with a female partner. Or Lou Reed, an iconoclast on multiple levels who captured Andy Warhol’s seedy Factory set with religious devotion. Our survival strategy has always been to counter hate with love; we manifest gayness to endure its opposite.

Yet on the most fundamental level, ABBA’s heterosexuality is more overt than the straightest rock dudes. Even before the group’s 1974 Eurovision breakthrough, Agnetha Fältskog and Björn Ulvaeus were romantic partners; so were Anni-Frid Lyngstad and Benny Andersson. Both couples married, and their musical nuances multiplied, climaxing in 1980’s anguished “The Winner Takes It All” just as Fältskog and Ulvaeus finalized their split; the next year, Lyngstad and Andersson divorced as well. “We will never reform,” Ulvaeus told me when I interviewed him in 1994. “Why would we?”

As its first-name acronym implies, ABBA was from its beginning a supergroup: The guys had been in successful bands; the gals were solo stars — even as a teen, Fältskog penned some of her hits. Ulvaeus and Andersson wrote, produced and played on the songs, but Fältskog and Lyngstad’s vocal synchronicity drove them so fiercely that sexual liberation anthems like “Gimme! Gimme! Gimme! (A Man After Midnight)” seem queer-tailor-made. Lesbian separatists and gay male misogynists might grumble, but most of us relish ABBA’s unmatched gender parity and equality. Being strong women and sensitive men who love and respect each other is central to the group’s alchemy as well as its enduring LGBTQ appeal: This is who we are too, and how we want the world to be.

And it’s fueled their reconciliation. “There was a union of heart and mind / The likes of which are rare and oh so hard to find,” Lyngstad recalls of the band’s past on “Voyage’s” “I Still Have Faith in You.” Her voice more fragile than before, she nevertheless manifests firm knowingness. “Do I have it in me?” she asks aloud with Fältskog, and in that moment, their merger vanquishes uncertainty.

Even after those divorces and decades apart, ABBA’s members come together with such grace that they collectively reach a smultronställe; literally, a wild strawberry patch. It’s a Swedish concept that film director Ingmar Bergman captured with “Wild Strawberries”; a secret place where fruits of the heart grow freely. This is ABBA’s gift to LGBTQ culture — an oasis within the mega-mainstream that Rodriguez and other gay pioneers helped landscape.

Barry Walters is the author of the forthcoming book “Mighty Real: The Music That Built LGBTQ America.”