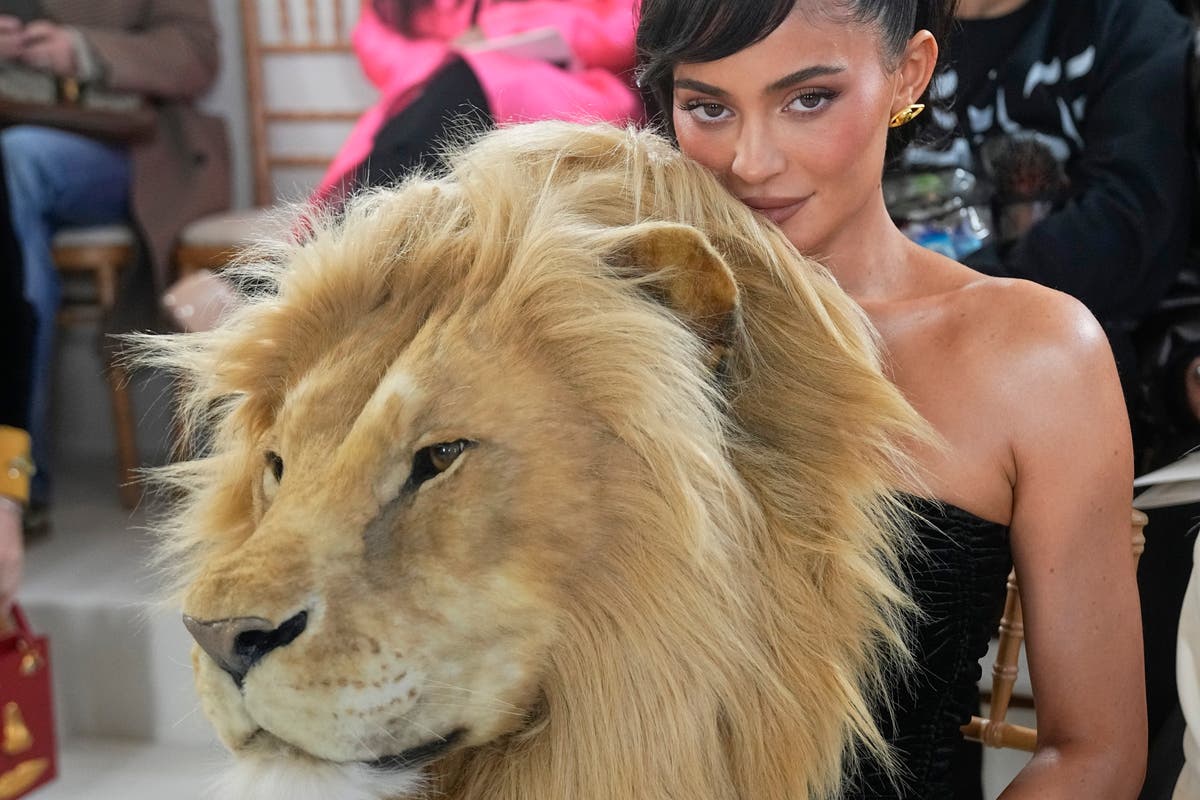 Bondage bears. A runway covered in mud. Spray-painting a dress. These are just a handful of viral moments created by the fashion industry in recent months. All of them provoked outrage. Some caused offense. Others led to criticism. Now, the industry can add another notch onto its online scandal belt: giant fake taxidermy.

On Monday, at Couture Fashion Week in Paris, models Irina Shayk, Naomi Campbell and Shalom Harlow walked the Schiaparelli runway in garments adorned with the heads of a lion, wolf and leopard, respectively. Kylie Jenner also wore the lion design to attend the show. The life-size mock-ups were made entirely from foam – and designer Daniel Roseberry has keenly stressed that “no animals were harmed” in their creation. The collection was inspired by Dante’s Inferno, with the animals intended to serve as a “reminder there is no such thing as heaven without hell; there is no joy without sorrow; there is no ecstasy of creation without the torture of doubt”.

It’s a somewhat tenuous link, made more so by Roseberry’s comments to Vogue: “The animals are one of the four literal references that I took from Dante’s Inferno,” he said. “In the first cycle of Dante’s journey, he faces terrors. He confronts a lion, a leopard, and a she-wolf. They each represent different things. But the lion and the animals are there as a photorealistic approach of surrealism and trompe l’oeil in a different way.”

What exactly they represent, though, beyond showing how easy it is to create lifelike taxidermy, remains somewhat unclear. Hence why the brand has sparked online furore, with people criticising it for depicting dead animals. “Grim! Real or fake, this just promotes trophy hunting. Yuck!” wrote Carrie Johnson, the wife of former Prime Minister Boris Johnson, in a post on her private Instagram. “Be better,” wrote photographer Misan Harriman in a post on his Instagram.

Others took the stunt as a slight on conservation, with one person tweeting: “The world today has only 20,000 lions, [which are] not evenly distributed. India has just 600 Asiatic lions in its western region. Governments have worked hard for their preservation. @KylieJenner this isn’t fashion, it’s a grave insensitivity towards a critical animal.”

However, not everyone agreed that the collection was quite so offensive. Animal rights organisation Peta has spoken out in favour of the collection. “These fabulously innovative three-dimensional animal heads show that where there’s a will, there’s a way – and Kylie, Naomi, and Irina’s looks celebrate the beauty of wild animals and may be a statement against trophy hunting, in which lions and wolves are torn apart to satisfy human egotism,” Ingrid Newkirk, president of Peta, told Metro in a statement. Meanwhile, on Tuesday’s episode of Good Morning Britain, former MP Ed Balls said criticism of the designs was “political correctness gone mad” and asked whether Johnson would be offended by The Lion King.

Regardless of whether you have an opinion on Schiaparelli’s show or not, few can deny just how much noise it’s created. Anyone on social media in the last 24 hours will have had a hard time avoiding the photographs – if not from Kylie Jenner herself, who has more than 379 million Instagram followers, then from one of the other millions of people that have since shared them alongside their respective takes.

Animal conservation aside, all of this taps into a wider question about what’s dictating the modern fashion industry. Sure, it’s provocative to put giant animal heads on clothes. Just as it’s provocative to put a topless Bella Hadid on the runway and spray her with a chemical that turns into a dress. And some would say that fashion’s role in culture is – and has always been – to spark shock and, subsequently, conversation. But just how valuable is that conversation when almost none of it is actually about fashion, or even art?

Nobody who is talking about the Schiaparelli show is talking about Dante’s Inferno, for example. Nor are they reflecting on what it means to blur the boundaries between what’s real and what isn’t, as Roseberry posits in his show notes, or any of the other meticulously crafted pieces he created in the collection. They’re just sharing photos of a dead lion.

Similarly, with the aforementioned Coperni stunt starring Hadid, nobody outside of the industry spoke about the great artistry of a spray-on dress, or the revolutionary chemical that was used to create it. Instead, they were mostly talking about Hadid’s lithe limbs, which were prominently on display, and then using the footage for TikTok videos.

Fashion has a long history of staging stunts, of course. But compare these modern day iterations to those from a distant pre-social media age and the distinction is stark. The late Alexander McQueen, for example, famously put Harlow in a white multi-layered strapless tulle dress in his Spring 1999 show, before robotic arms began spraying it in black and yellow paint. It was a moment of pure performance art, particularly because Harlow herself is a trained ballerina, and interacted with the robots with grace and poise as the turntable she stood on moved.

Despite the obvious parallels with Coperni, nothing can quite compare to that moment. Nor could it compete with the hologram of Kate Moss that graced McQueen’s runway in 2006, in which she appeared as an apparition in a white frothy gown. Or the model that resembled an angel and was suspended in mid-air during Thierry Mugler’s 10th anniversary show in 1984. All of these were tangible artistic moments that feature prominently in fashion’s history books. Today, though, that cultural capital is only achieved if something goes viral on TikTok. And what’s more likely to do that? A beautiful piece of performance art, or Kylie Jenner wearing an animal on her chest?

There are a few reasons why the latter hits differently. The first is where it hits: on social media, where everything is reduced to a 30-second video you barely acknowledge, or a photograph you scroll past while you’re on the loo. When something goes viral, it captures our full attention for a certain amount of time. But because of the fast-paced nature of the internet, it becomes disposable overnight – a relic from just another day online. It takes a lot for something to transcend today’s throwaway culture and carry some sort of meaning in years to come. Putting a lion on the body of one of the most famous reality TV stars in the world doesn’t quite cut it.

Sadly, though, this is the way many of us now consume fashion, and therefore how designers are tailoring their shows: standout moments that don’t require context for impact, because the internet doesn’t have time to digest it anyway. It’s the antithesis to art, which requires focus, analysis, and examination – things that were far easier to achieve in an analogue world. Perhaps we simply don’t have the patience for it anymore.

And so none of this is necessarily the fashion industry’s fault, of course. Wanting to cause a scene on social media makes sense from a business perspective – not only does it introduce the brand to new audiences, it helps to present it as relevant, or at least an integral cog in the wheel of online discourse. But perhaps Schiaparelli has shown us that things are going too far.

Besides, if you actually wanted to celebrate the glory of the natural world, as Roseberry stated in an Instagram caption, there are arguably far better ways to do that than by recreating an incredibly lifelike decapitated animal.

Love on a budget: How to cook an affordable steak dinner for two