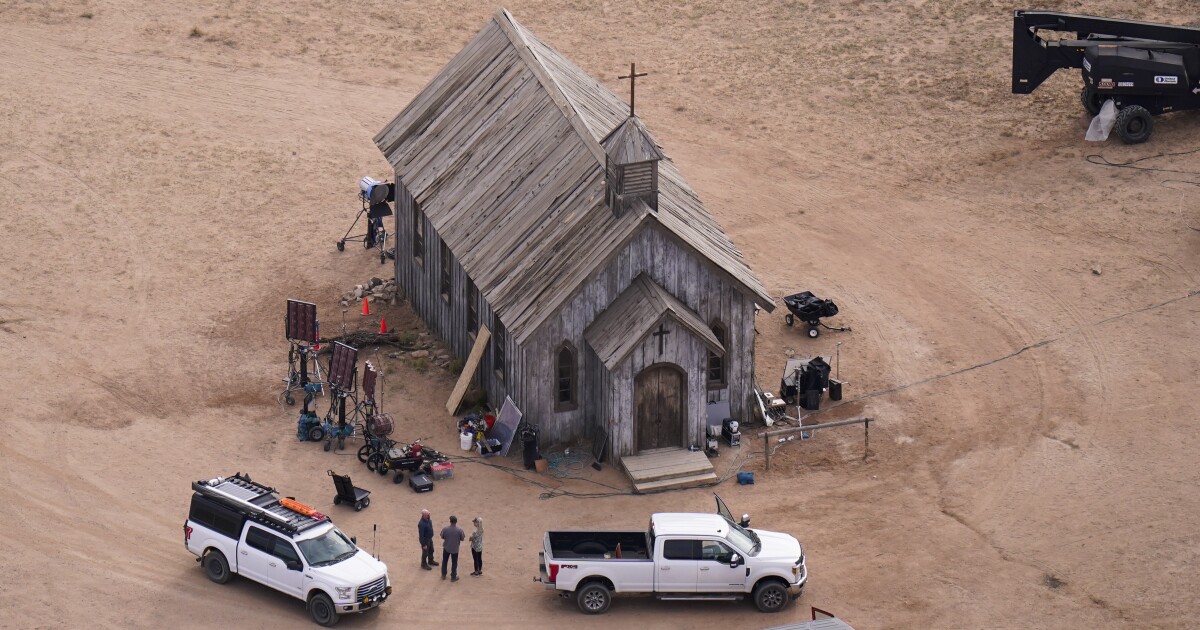 A former “Rust” cameraman pushed back Wednesday against allegations of sabotage recently floated by attorneys for the set’s sole armorer, who has come under scrutiny following the fatal shooting of cinematographer Halyna Hutchins.

“If they have any evidence of that, they should be talking to the sheriff and not morning television shows,” Luper said, referring to multiple TV interviews Gutierrez Reed’s lawyers gave Wednesday.

“It’s dangerous, and it’s an irresponsible theory to put out on TV.”

According to The Times’ timeline of events, Luper and other members of the “Rust” camera team — fed up with unsafe and unreasonable working conditions — walked off the set the morning before Hutchins died.

Reps for Gutierrez Reed have speculated that a disgruntled crew member might have smuggled the live rounds of ammunition to “prove a point.”

Asked by Cuomo if he ever “heard anybody saying that they wanted to do something like that” or had “any inclination” that someone would purposefully cause such a safety hazard, Luper said, “Absolutely not.”

“Movie sets — it’s a group of friends,” he added. “Everybody there, they deeply care for each other.”

Around the time Cuomo’s conversation with Luper aired on CNN Wednesday night, Gutierrez Reed’s attorneys released an additional statement doubling down on their defense of their client, whose experience level has come into question during the “Rust” investigation.

Late last month, the senior electrician on “Rust” publicly blamed Gutierrez Reed and producers for “negligence” leading to Hutchins’ death — arguing that “there is no way a twenty-four-year-old woman can be a professional with armory.”

“Hannah was incredibly safety conscious and took her job very seriously from the moment she started,” said Jason Bowles, an attorney for Gutierrez Reed.

“Never in a million years did Hannah think that live rounds could have been in the ‘dummy’ Round box. Who put those in there and why is the central question. … No one could have anticipated or thought that someone would introduce live rounds into this set.”

As previously reported by The Times, Luper raised several issues with the “Rust” production, from a lack of adequate pay and lodging for crew members to an absence of industry-standard safety bulletins.

While appearing on “Cuomo Prime Time,” Luper reiterated his concerns about how the “Rust” set was run, citing “one red flag after another red flag” eventually culminating in Baldwin shooting Hutchins and director Joel Souza.

“There were two firearm discharges that were not under anybody’s control, and at that point, they should have stopped filming, pulled the firearm out of circulation — per the industry-wide safety rules. But we kept filming anyway, and they never addressed it. And I addressed it with the producers themselves.”

In a statement to CNN, the producers of “Rust” dismissed Luper’s “allegations around budget and safety” as “false, patently.”

“He had absolutely nothing to do with or knowledge of safety protocols or budgets,” they added. “Safety is always the number one priority on our films. And it’s truly awful to see some using this tragedy for personal gain.”

Luper denied that characterization, arguing that he doesn’t “want to be in front of cameras,” especially as someone whose “whole career is spent behind them.”

“To borrow a phrase from the producers … it’s patently false that I’m not responsible for safety, because it’s everybody’s responsibility on set for safety,” Luper said.

“Safety concerns were overlooked consistently. And it led to somebody dying on a movie set.”