Review: Tom Hanks and A.I. are no match for ‘Finch’s’ artificial giggles and tears 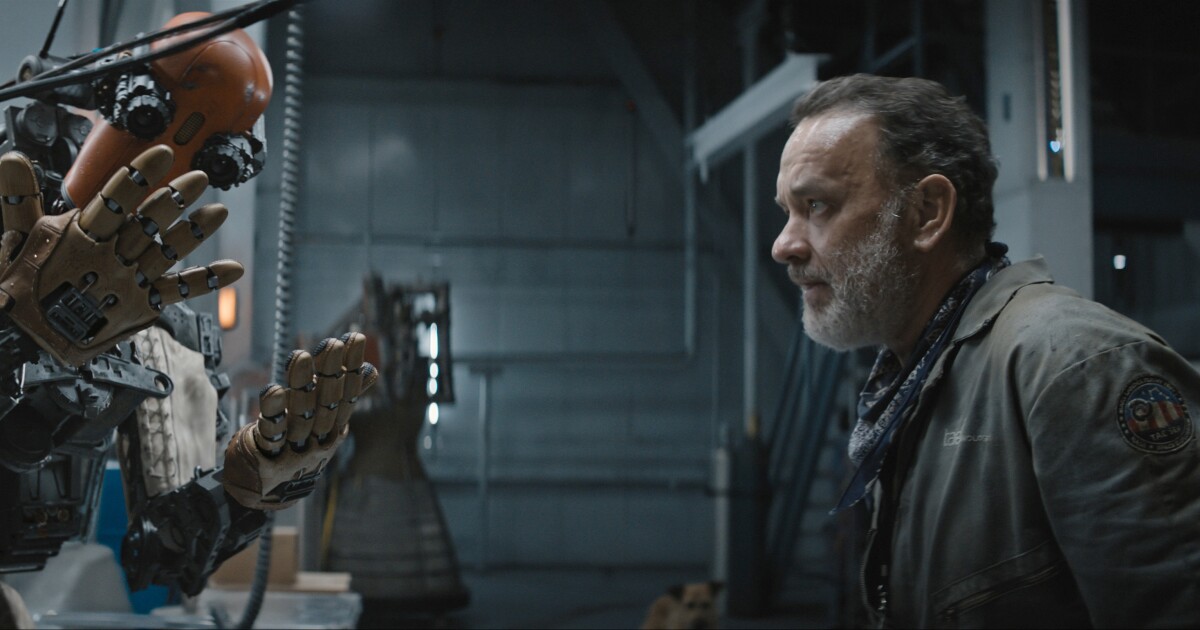 As movies about the apocalypse get more and more relatable (gulp) to audiences — I mean, just the word “audience” feels in danger — the onus for filmmakers becomes turning the 21st century’s most popular new genre (yes, I include superheroes) into something less like unbridled fantasy and more like a reliable mirror on real-world concerns.

But even without zombies or aliens, the post-doomsday companionship drama “Finch” starring Tom Hanks and a childlike droid is a tiring, cloying misfire. A mishmash of star power, bleakness, CGI and the cutes, it will on the one hand remind you of how charmingly adaptive Hanks can be, while the same time proving just how problematic the end of the world is as a scenario for schematic heart-tugging.

Which is a shame, because Hanks is no stranger to being the only human around, having been a memorably convincing scene partner opposite a destructive mastiff (“Turner & Hooch”) and an anthropomorphized volleyball (“Cast Away”). The two-time Oscar winner has always had a special knack with the light touch and powerful depth of meaningful social interaction, so even the prospect of him as the post-apocalypse’s Sad Max, making his way through a barren United States with only a mutt, a land rover and a robot to talk to, carries a kind of repeat-performance allure.

But as directed by “Game of Thrones” alum Miguel Sapochnik and written by Craig Luck and Ivor Powell, “Finch” is all concept, no movie, like something Pixar would have discarded in an early brainstorming session or what a Terminator would invent as a psy-ops campaign before the takeover.

It’s a resource-depleted, climate-cooked world we’re dropped into 10 years after Something Bad Happened. (Which, we all should surmise, is actually Happening Now.) When he’s not foraging grocery stores in a decimated, deserted St. Louis, wearing a cooling-controlled UV suit so he doesn’t fry, Finch Weinberg (Hanks) holes up in the subterranean lab of the tech conglomerate where he worked as a robotics whiz, taking care of his dog, Goodyear, and tinkering on what’s become his life’s work: a trainable, two-legged A.I. robot that will look after Goodyear when he can’t anymore.

Climate nastiness waits for no one, however. When Jeff (the name Finch’s creation gives itself) identifies an impending superstorm — 40 days long, we’re told unwinkingly — Finch decides it’s time for him and his non-human posse to vacate for the West Coast in his solar-powered RV. (An Ark-V?)

There’s something almost quaint about a man-teaches-robot/man-befriends-robot movie whose soul is stuck in the time of “Short Circuit.” But that’s the family-friendly level of simplistic wisdom at which “Finch” operates. It quickly grows annoying too, with the chance to appreciate Hanks’ professionalism playing a broken loner being taxed at every turn by the screenplay’s preference for what will spark a giggle or trigger a tear. And all of it feels like a missed opportunity to explore what is already a complicated reality — our relationship to technology. There’s certainly no indication from the perfunctory handling of the storytelling and sentiment that Sapochnik even thinks that theme is interesting.

As Jeff, Caleb Landry Jones’ motion capture portrayal of boyish enthusiasm is fine, although it seems to toggle uneasily among student, child and pet, and the grating Borat-via-Stephen-Hawking voice is certainly a choice. Jeff sounds more human as it “learns,” but also more precociously childlike and, therefore, just as cartoonishly off-putting.

Technically, there’s admirable attention in Jo Willems’ cinematography to how the light changes as the road trip progresses. But caring about what happens in “Finch” is an obstacle course that you eventually give up on. If there’s an unintended sadness, it’s that we are indeed watching an apocalyptic future, one in which the skills of a Tom Hanks are increasingly being sidelined by the algorithms of a moviemaking machinery that wants to see a dog grow to love a robot. That’s a scary weather report, indeed.