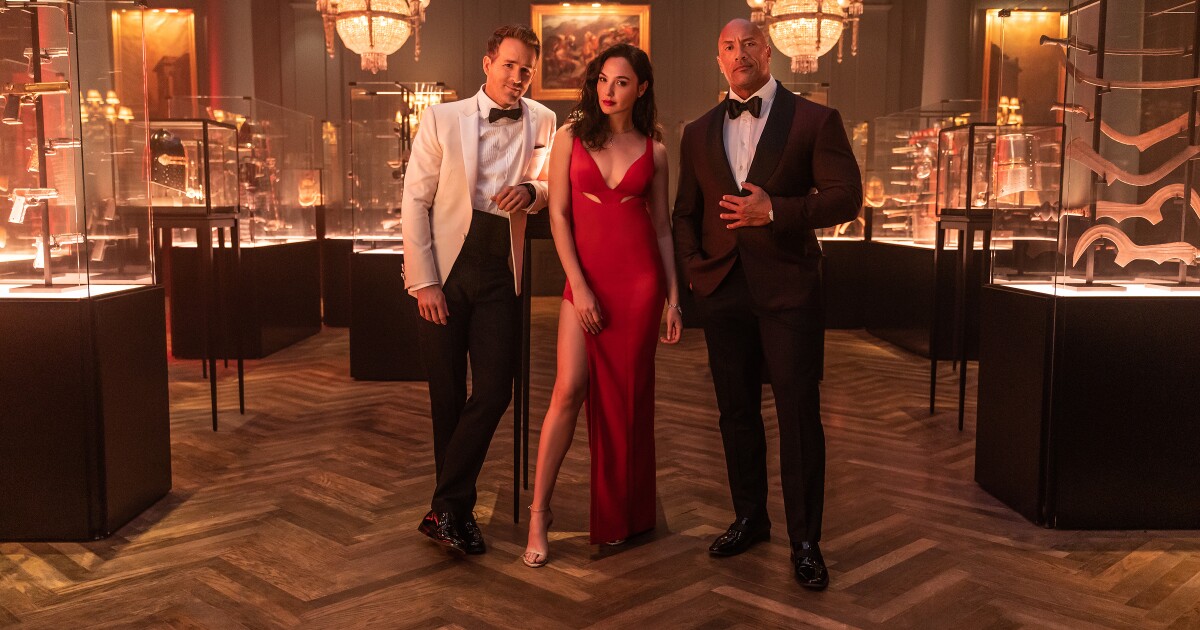 The Times is committed to reviewing theatrical film releases during the COVID-19 pandemic. Because moviegoing carries risks during this time, we remind readers to follow health and safety guidelines as outlined by the Centers for Disease Control and Prevention and local health officials.

A red notice, as helpfully defined by “Red Notice,” is the highest level of arrest warrant issued by Interpol. You might think of this detail as a red herring, given how little it really factors into the movie’s cheerfully hectic heist-caper plot. The title color, however, does get quite a workout: It pops up in the brilliant red gown Gal Gadot wears to a masquerade ball and in the red-ringed arena where Dwayne Johnson stares down a raging bull. And of course, it appears in the bright red Netflix logo that proudly kicks off the movie — the kind of noisily globe-trotting, tomb-raiding, rocket-launching entertainment that, a few years ago, would have been released by a traditional studio.

That was actually the plan in 2018, when Universal Pictures greenlit “Red Notice” on the strength of Johnson’s attachment and presumably some hint of a premise (big guns, priceless artifacts, daddy issues — it writes itself). But a year later, before production began, the studio balked for widely speculated-about reasons: Maybe they finally took a look at writer-director Rawson Marshall Thurber’s script, or maybe they were scared off by the (undeserved!) box office disappointment of “Skyscraper,” the previous Thurber-Johnson joint. Whatever the cause, Netflix snapped up the picture for more than $160 million, making it one of the costliest movies in the streamer’s history and dropping more than a few industry jaws.

That was all before the pandemic, which delayed the movie’s production and normalized the once-unthinkable prospect of pricey studio movies (like, say, Gadot’s “Wonder Woman 1984”) becoming predominantly streaming experiences. All of which makes the tediously cranked-up “Red Notice” only slightly more interesting as a movie-industry story involving enormous quantities of money than it is as a fictional story involving enormous quantities of money. One hundred sixty million dollars is a hefty sum (and probably a conservative estimate), but it’s dwarfed by the $300 million payday being chased by this movie’s trio of disreputables.

Johnson plays John Hartley, an FBI profiler who’s set his sights on Nolan Booth (Ryan Reynolds), one of the world’s most wanted and obnoxiously deadpan art thieves. Soon they’re embroiled in a scheme centered on three bejeweled eggs once owned by Cleopatra, all of them now kept under lock and key in far-flung corners of the globe. Various sub-Dan Brown, sub-James Bond, sub-Indiana Jones shenanigans ensue: Windows shatter, scaffolding collapses and a brand spankin’ new Porsche lasts about five seconds into a not-so-thrilling chase in one of the movie’s better gags. The action leaps from a museum in Rome to a getaway in Bali to a prison in coldest Russia, which is where the no-nonsense agent and the wily thief go from reluctant cellmates to reluctant partners.

Forcing their hand with a mischievous wink is Booth’s archrival in crime, the Bishop (Gadot), who has an annoying talent for playing Booth and Hartley off each other while remaining several steps merrily ahead. This forced triangulation adds a too-faint crackle of sexual tension and a whole lot of lopsided banter, with Reynolds predictably dominating the wisecracks while his co-stars have the general good sense not to even try keeping up. The miscast Gadot finds herself at a particular disadvantage. Whether she’s mocking a trussed-up intelligence analyst or applying electroshock paddles to Johnson’s nether-regions, she confirms — much as her luminously earnest Wonder Woman performances already suggested — that winking cynicism isn’t her strong suit.

Johnson, a deft performer with a gift for self-mockery, fares somewhat better. As in Thurber’s delightfully dumb-but-not-so-dumb “Central Intelligence,” he finds himself cast as the bigger, buffer side in a rambunctious action-comedy bromance; in that movie, however, he and Kevin Hart both played against type and struck on a surprisingly fresh, counterintuitive dynamic. Johnson and Reynolds aren’t the worst action duo — they’re both good at dangling from roof railings — but their odd-couple bit is thin and predictable by comparison. Reynolds basically sits there shooting off his mouth, rattling off up-to-the-minute references to Instagram and Post Malone, while Johnson responds with mostly stony silence, his facial muscles occasionally stretching the short distance from exasperated to unimpressed.

Put another way: Reynolds is there to mock and deconstruct the plot (“Look for a box that says ‘MacGuffin,’” he notes during a particularly dull stretch of the egg hunt), while Johnson and Gadot are on hand to earnestly recap it. And some recapping is admittedly helpful, given how busily Thurber piles on the narrative fake-outs and tedious side characters, including an Interpol killjoy (Ritu Arya) and a shirtless arms dealer (Chris Diamantopoulos) — all en route to an ending so inane that the characters seem faintly embarrassed to have to go along with it. A depressing reminder of what Hollywood considers “original” material these days, “Red Notice” plays one of those self-consciously convoluted, ultimately derivative long cons that strain so hard to seem breezily insouciant they wind up wearing you out. By the end, it’s the clichés that warrant a rest.

Rating: PG-13, for violence and action, some sexual references and strong language