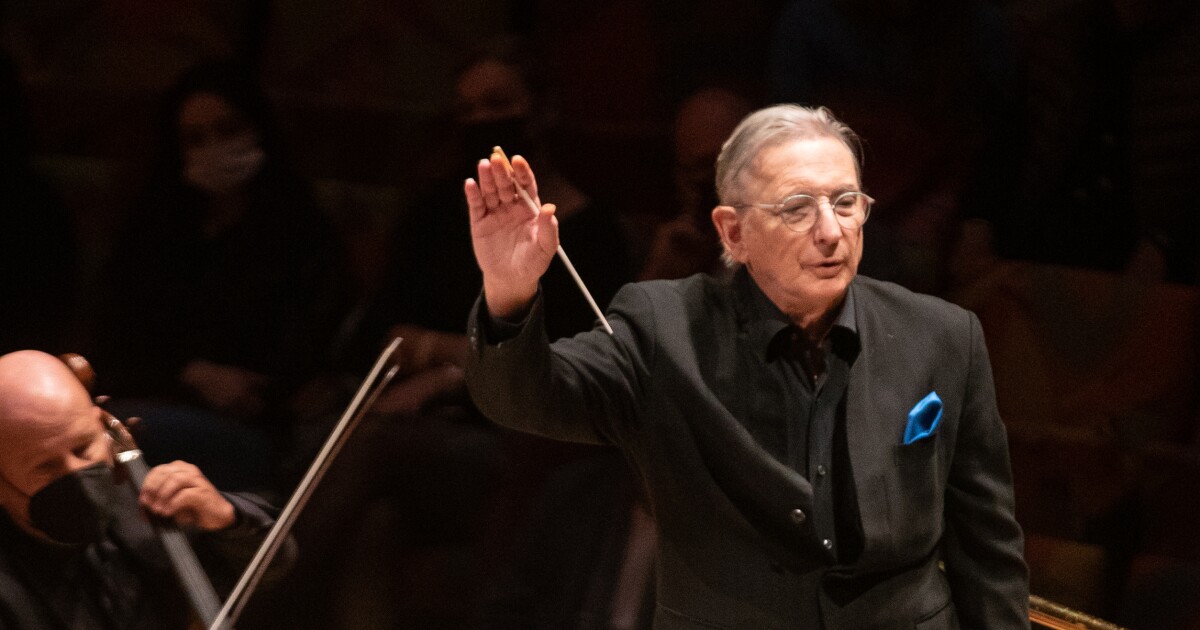 Word must have gotten out. Michael Tilson Thomas’ concerts with the Los Angeles Philharmonic are not to be missed. They are an inspiring study in resilience. But they are mainly essential for hearing great music.

Last week, the celebrated 77-year-old conductor, who is in treatment after the removal of a brain tumor last summer, returned to Walt Disney Concert Hall for the first time in three years. The audience was strikingly small, Tilson Thomas’ hometown having just reached record numbers of reported COVID-19 cases. But what a difference a week makes. Same high COVID case numbers, but Thursday night at Tilson Thomas’ second program, the attendance was sizably larger.

For the first program, a staggering Tilson Thomas performance made Prokofiev’s wartime Fifth Symphony grippingly consequential and presented his own personal “Meditations on Rilke” as reflectively disquieting. For the second of his two weeks with the L.A. Phil, he offered even more staggeringly disquiet but also turns more genially reflective.

Disquiet doesn’t quite capture the crazed core of Alban Berg’s Three Pieces for Orchestra, but it comes close to this labyrinthine description of chaos, and it is a Tilson Thomas obsession. The quiet from which it emerges was something new in music when it was written in 1913 and 1914. Praeludium, the first piece, begins in empty silence. If you don’t spot the gong hidden in the back of the large eight-player percussion section, you won’t quite be able to tell when or from where the first inkling of sound arises. No matter if you do spot it, because you still won’t grasp the imperceptible transformation of noise to notes.

Berg’s score was written at the time his teacher Schoenberg’s “Pierrot Lunaire” and Stravinsky’s “Rite of Spring” had their premieres. Thanks to Schoenberg’s revolutionary atonality and Stravinsky’s revolutionary harmonic invention, these two works are credited with changing the course of music in the 20th century. Yet it was Berg’s Three Pieces that provided another revolutionary first that was just as important. It was the first major work in the Western canon to treat noise as substantial music in its own right — not just as a sound effect or a curiosity, but real music.

The L.A. Phil had played the Berg once before in Disney, conducted by Franz Welser-Möst in 2004. At that time, the noise was nervous-making, something to be overcome. But as Tilson Thomas revealed the percussive seconds of the Praeludium on Thursday, inchoate noise and harmony were heard in the uniquely hypersensitive Disney acoustic as the same species of sound. In a seemingly shamanistic act, Berg expanded the universe of sound like none before him.

If that has not been given enough notice, a few revolutionary seconds in the fanciful scheme of Berg’s Three Pieces might seem like nothing. In his remarks to the audience, Tilson Thomas offered a personal tour of the signposts for what, at first exposure, can prove an indecipherable 20 minutes of bewildering complexity. Little bits of Mahler and Mahler-like music emerge out of heaven knows what kind of mixed-up soup. Every page of the score is a jumble.

Tilson Thomas noted that his fascination with the score began at 17. He didn’t mention that he was the quintessential Angeleno prodigy, hungrily taking in all aspects of our émigré musical culture and pop culture. Still, the Berg has never left him alone, he said. He might be gardening, and some little thing in it pops into his head uninvited.

He compared that to an aha! moment he recently had in the ICU after surgery. He was listening to Schubert. The exhilaration from a musical turn of phrase made his whole body react, leading startled nurses to rush to him in an emergency mode. “I’m fine,” the patient assured them. He was just listening to music.

The Three Pieces performance Thursday night might also be research into the effect of brain surgery on cognitive thinking. Comprehending, let alone conducting, these pieces is no less challenging than quantum mechanics. Indeed, they were written in the hotbed of Berlin, where Einstein lived at the time. Einstein, who had published his theory of relativity less than a decade earlier, was no fan of the harmonically uncertain principles of Schoenberg and his school. The physicist, who was also a devoted amateur violinist, sought the Newton-certain comforts of Mozart. But what Einstein really needed was the guidance of Tilson Thomas.

Berlin was at the cusp of war in 1914, when Berg finished the Three Pieces, and they capture that chaos. Their silences contain distilled fury, and Tilson Thomas made incomparably sure that their climaxes, which included the whacks from a mighty hammer, undistilled that fury. The sense of inscrutable tragedy was foretold like no other music of the period. Old World embers still burned, ready to ignite the unknowable future.

Yet there was beauty galore in the thousands (yes, thousands) of tiny details, glittering sonic shards that peered through the huge orchestra, like brilliant cutouts on a vast canvas. Through it all, Tilson Thomas retained the big picture, unfolding in huge lyric arcs while somehow making every member of a very large orchestra come across as an individual.

Berg was a young man when he wrote these Three Pieces. All the works on the program were by composers in their 20s and just coming out of the gate. Tilson Thomas began arrestingly with very early Mahler, the tuneful “Blumine” movement that was in the original version of his First Symphony. It was gorgeously played, as though all were right with the world.

The concert ended with Brahms’ First Piano Concerto, the composer’s first major work for a symphony orchestra. Emanuel Ax was the soloist. He is a pianist as truth-teller (if with a gleam of mischievousness in his eye), and he played with contented rightness that once more conveyed the feeling of the world turning on the proper axis. (Einstein might have loved it.) Ax made the concerto all about Brahms. Tilson Thomas dug in, bringing out the bass, bringing out the mellowness of the horns and winds, but not asking for bigness.

The performance was neither slow nor fast, neither especially soft nor loud. It was not immoderate. But it was not moderate, either. What it did have was the quality of looking at Brahms in clear-eyed hindsight. The sheer richness and zest that this concerto foretold was realized in Brahms’ career. Schoenberg claimed to be the successor of Brahms, and Schoenberg gave us Berg. Tilson Thomas programmed this concert last spring, when he couldn’t predict what our world, or his, would look like now. But he did know that the unknowable resides in all things.

As is his way, Ax played as though one of the orchestra. He watched the players as much as the conductor. He shared his bows with them and Tilson Thomas. But he wound up with the exquisite last word. His encore was Debussy’s Berceuse, and it was marvelous. Tilson Thomas wasn’t the only reason to defy COVID.