Review: ‘Belle’ is a striking virtual reality riff on ‘Beauty and the Beast’ 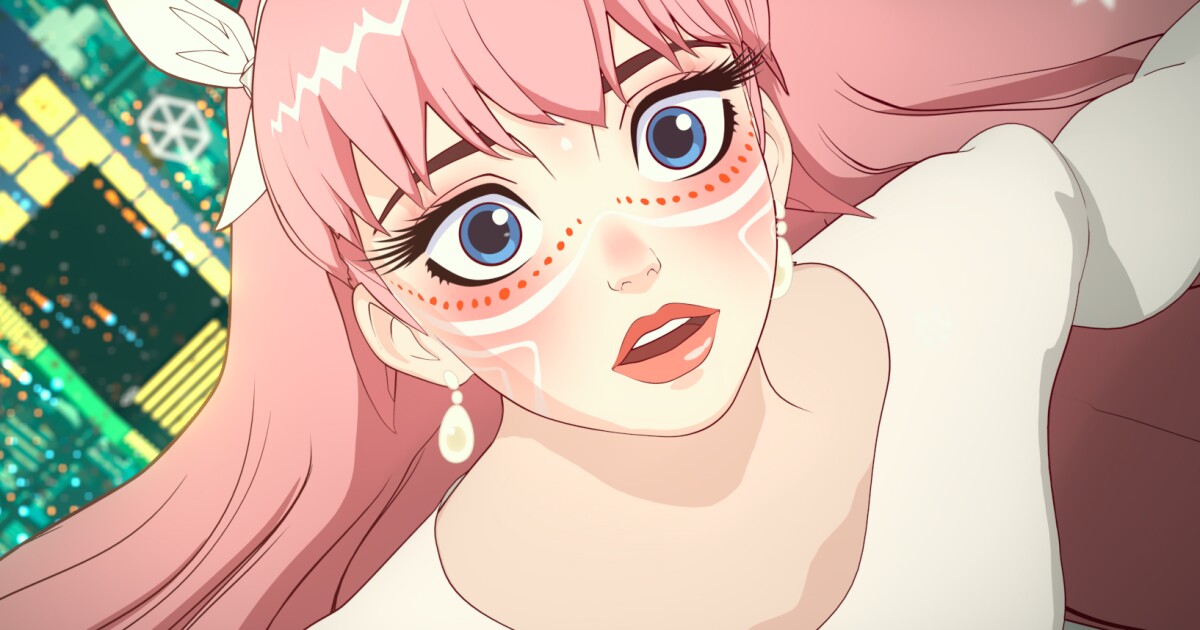 The Times is committed to reviewing theatrical film releases during the COVID-19 pandemic. Because moviegoing carries risks during this time, we remind readers to follow health and safety guidelines as outlined by the Centers for Disease Control and Prevention and local health officials.

“Belle,” a dazzling new anime from the Japanese director Mamoru Hosoda, drops us into a surreal cyberscape known as “U,” where internet users hide behind outlandish avatars, enormous humpback whales float through the digital ether and a nobody can become a somebody overnight. That nobody would be Suzu (voiced by Kaho Nakamura in the original Japanese version), a moody, freckled teenager who finds herself suddenly reborn as Belle, a pink-haired, silver-voiced diva who racks up millions of followers, even as she draws the attention of a mysteriously bruised and brooding Beast. It’s a tale as old as time and as newfangled as TikTok, in which the virtual world, though packed with fantasy and artifice, can bring startling truths to the surface.

Hosoda sketches in Suzu’s pre-virtual existence early on, with a mix of present-day bustle and aching flashbacks that coalesce into a messily moving portrait of teenage malaise. We witness the terrible tragedy that scarred her childhood and the sadness and shyness that have haunted her ever since. We also learn about her love for singing, a gift she’s stifled in the midst of her near-constant anxiety and grief. All these traits — Suzu’s sensitivity, her loneliness, her musicality and, yes, her freckles — wind up shaping her avatar, Belle, thanks to the wonders of U’s groundbreaking “body-sharing technology,” which draws directly on a user’s physical and psychological makeup. In other words, Belle isn’t just a mask; she’s a striking reflection of who Suzu is, as well as a portal into an intense new plane of existence. Like all U avatars, she provides both concealment and revelation.

If that sounds like a somewhat idealized view of technology, well, it is. Hosoda’s virtual reality conceit may hail from a still-distant future, but he isn’t in a particularly dystopian mood. Technology has its pitfalls, of course, as the movie demonstrates with light dollops of social media satire. As Belle becomes U’s newest celebrity, she brings out all manner of online trolls: knee-jerk cynics, jealous rivals and many others who dislike the songs she sings and dismiss her as an attention hog. (Suzu is horrified to have so many haters, but her tech-whiz best friend, Hiroka, sets her straight: “If you only get compliments, you only have hard-core fans,” she notes. “In U, stardom is built on mixed reception.”)

Suzu must also deal with everyone’s curiosity over who Belle really is, and she clings tightly to the anonymity that has paradoxically enabled her to shine so bright. She isn’t the only one keeping her identity a secret, of course, and in that respect, the extravagantly stylized world of U isn’t all that different from Suzu’s small-town high school, where she’s one of many hiding their feelings in plain sight. Masks proliferate in “Belle,” not all of them strictly virtual; in a flurry of romantic-comedy subplots, we meet a number of Suzu’s classmates, who turn out to have unspoken desires and anxieties of their own. (They lend the story some sweet emotional heft, as do the choir ladies who provide Suzu with moral support.)

But the most troubling mask is worn by U’s Public Enemy No. 1, a sharp-fanged, dark-maned, double-horned Beast also referred to as the Dragon (voiced by Takeru Satoh). Having left a trail of digital destruction in his wake, the Beast is being hunted online by vigilante forces, but it soon becomes clear that only Belle has the power to tame him. And so begins a very conscious homage to “Beauty and the Beast,” one that’s more Disney than Jean Cocteau, starting with our heroine’s choice of moniker. (She actually begins by calling herself “Bell” — “Suzu” means “bell” in Japanese — before her fans Frenchify it for her.) But Hosoda pushes his retelling of this fairy tale into significantly darker, wilder territory. At the heart of “Belle” is a harrowing story of abuse and violence, of sacrifice and rescue — one that at times seems ripped-from-the-headlines topical and elsewhere feels as trippy as a “Matrix” movie, complete with death-defying, skyscraper-shattering acrobatics.

Earnest, youthful journeys into otherworldly realms are nothing new for Hosoda, whose earlier animated features include “The Girl Who Leapt Through Time,” “Summer Wars” and the 2018 charmer “Mirai.” His storytelling may leave something to be desired in terms of elegance and economy, but my interest in “Belle,” though frequently dragged hither and yon, never flagged. Despite the unwieldy narrative complications, Hosoda achieves an adroit, ultimately instructive balance of kinesis and stillness. U’s virtual arena may tilt toward sensory overload, but the time Suzu spends there is matched — and ultimately overpowered — by an everyday reality she’s spent too long eluding.

Hosoda’s backdrops, with their soft colors and photorealist details, are always gorgeous enough to get lost in, but they also tell a deeper story of community and healing. An early shot of a frustrated Suzu walking alone across a narrow bridge in coldest winter is answered by later images of her with her friends, happily framed against a warm, sun-kissed landscape. The images dancing across our screens, cinematic or virtual, may be addictive and transfixing. But as “Belle” is wise enough to acknowledge, the world that enables and inspires those images will always be a deeper wellspring of magic.

In Japanese with subtitled English and dubbed English versions