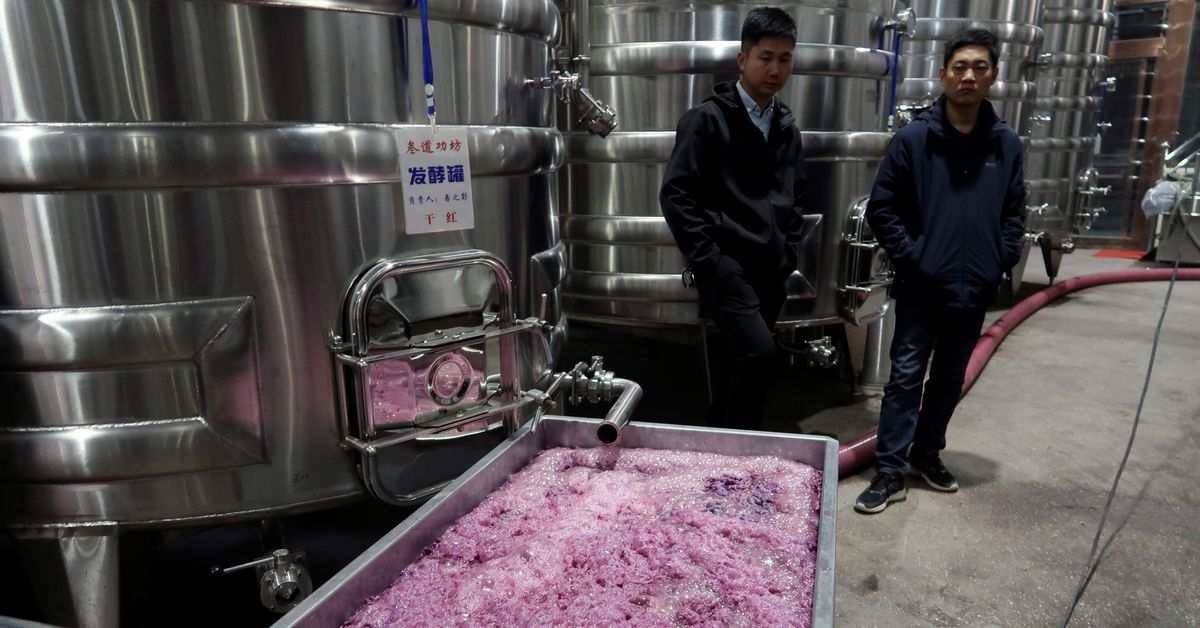 YINCHUAN, China, Nov 2 (Reuters) – Chinese winemaker Legacy Peak, which started producing grapes more or less by accident in 1997, symbolises the rapid growth of an industry that now wins accolades in global markets, but it once came close to giving up.

“We wanted to pull out all the vines and call it quits,” said Liu Hai, its second-generation owner, recalling early struggles to cultivate a barren plot received from a local government in payment for construction work.

His family knew nothing about farming when they got the land in the arid north-central region of Ningxia on condition that it be devoted only to grapes, but they started making wine a decade ago, after wineries that used their fruit won several awards.

Since then, Liu says the winery has won awards and found export markets in France, Germany and southeast Asia, despite annual output of fewer than 100,000 bottles.

From the rolling hills of coastal Shandong province to the desert heights of Ningxia and the deep valleys of southwestern Yunnan, Chinese vineyards and wineries are winning recognition.

“China is an up-and-coming fine wine producer, and its best wines can compete on the world stage,” said wine educator Edward Ragg, who is a reviewer for the influential Robert Parker Wine Advocate.

The products of wineries such as Chateau Nine Peaks in Shandong, Silver Heights and Grace Vineyard in Ningxia, and Ao Yun in Yunnan, are rated as “outstanding wine of exceptional complexity and character” by Parker’s newsletter.

Some, such as Nine Peaks and Legacy Peak, are finding export markets in Asia and Europe.

China’s wine market is the sixth largest in the world, with event organiser Vinexpo saying it consumed $14.8 billion worth of wine in 2018, and forecasting sales of $18 billion by 2023.

But domestic wineries must battle an image problem, as consumers at home can be suspicious of their quality and often put off by high prices.

“It was always easier to sell to foreigners because they are more open-minded, but it has been a tough sell with Chinese customers,” said Liu.

Other problems are high production costs and erratic weather that can hamper efficiency and quality, while a slowing economy and the COVID-19 pandemic have hit China’s wine consumption since 2018. read more

Modern winemaking in China dates fromg the 1980s, when French firms, such as the precursor of Remy Cointreau (RCOP.PA), began investing after the door was opened to foreign businesses by then-leader Deng Xiaoping.

While the French influence persisted in a market dominated by reds and a glut of Bordeaux imitations, quality began improving in the early 2000s.

That was a time when vineyards focused on growing healthier grapes just as incomes grew sharply, with more people traveling abroad and drinking more wine.

Now home-grown wineries can allay the suspicions of some consumers, such as Yang Lu, who owns a restaurant in the Chinese capital.

“I was amazed by how the aroma was full of nice fruits and flowers,” said Yang, describing her experience last year of first sampling the Mountain Wave label produced in Ningxia.

“It had a nice colour and was smooth with a long finish.”

Until then, Yang, who is in her 30s, educated overseas and widely travelled, had almost always ignored domestic wines, uncorking only imports such as New Zealand wines made from pinot noir.

Some winemakers, such as Ian Dai, 33, who is behind the Ningxia brand Xiaopu, priced in the range from 168 yuan ($26) to 300 yuan ($47), are turning away from industrial methods in the search for a Chinese signature variety.

Dai said he was looking to more natural methods, such as fermenting without commercial yeast or leaving acidity and tannin levels unadjusted to “let grapes express themselves”.

An independent with no vineyards or winemaking equipment of his own, Dai is in his fifth year of winemaking after dropping out of college in Sydney and spending a decade in wine sales.

Dai hopes to find grape varieties for a wine that represents China.

“As a winemaker I should have the ego to make the best wine in this climate with grapes grown here,” said Dai, who expected it would take two decades to produce such a wine in China.

Chinese wineries are also experimenting with alternative grape varieties, such as marselan, aglianico and saperavi.

Marselan, a cross between cabernet sauvignon and grenache embraced years ago by Legacy Peak and others, offers high yields and a fruitiness much needed by Chinese reds, experts say.

“Marselan could one day become China’s signature wine grape, like malbec is to Argentina,” added Ragg, a holder of the Master of Wine qualification.

Reporting by Norihiko Shirouzu in Beijing and Yinchuan; Editing by Tony Munroe and Clarence Fernandez