Looking for a Halloween hike? Try this high-desert trail 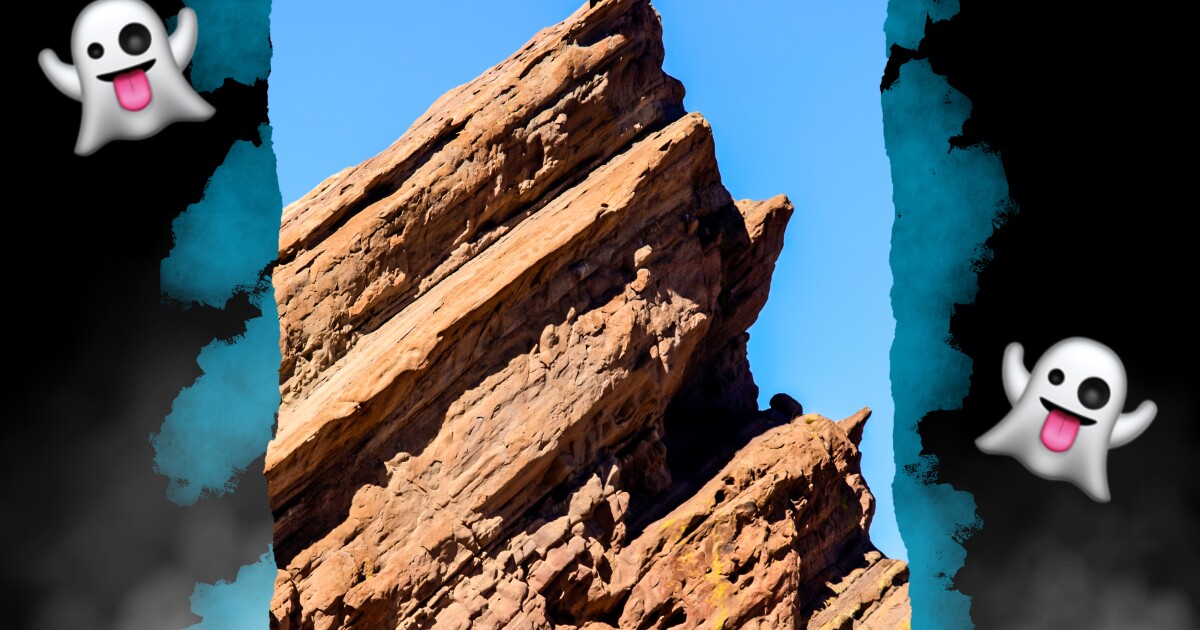 I can’t think of a better Halloween hike than Vasquez Rocks in Agua Dulce. It doesn’t have ghosts or goblins but it checks all the naturally scary boxes. It has a high-desert postapocalyptic vibe and a decently creepy backstory. Let’s start with the obvious. The jagged sandstone slabs are the most astonishing features. They “rise from the ground at angles between 45 degrees and 52 degrees, pointing to the north like whales peering curiously from the water.” That’s the description on the Agua Dulce History Project’s website. I never thought about the 25-million-year-old slabs as peering whales but I will now.

The hike: There’s an easy 2.7-mile loop that’s pretty flat, which guides you through the glorious rocks. If you give in to temptation and start climbing, just add that to the time of your adventure. The tallest peak rises 150 feet above the canyon floor. It’s best to go in late afternoon when the soft light starts to play on the rocks, which turn all kinds of colors. Fall’s cooler temperatures also mean you won’t fry out there. (Don’t go when temperatures are in triple digits.)

The first people: The Tataviam people were hunter-gatherers who lived here and ate things like juniper berries and yucca. The best part: They used berries, charcoal and other substances to leave behind images we now call rock art. Their early efforts — the sun, outlines of animals and figures — remain to this day.

The bad guy: The rocks take their name from a 19th century bad guy called Tiburcio Vasquez. He and his gang hid out here and in the rugged canyons of the San Gabriel Mountains after committing foul deeds. They used the rocks as a natural hiding place to meet and stash booty. Vasquez did time in San Quentin State Prison for horse rustling and then was jailed in San Jose after a string of robberies. He was found guilty and hanged at the age of 39 in 1875.

The Hollywood love: “Star Trek” creator Gene Roddenberry used the rocks as alien turf in his original TV series in 1966. “It’s where Capt. James T. Kirk famously battled a seemingly indestructible green lizard called a Gorn in the episode titled ‘Arena,’ and it represented planet Capella IV where Kirk and Dr. McCoy helped an Amazon-like Queen give birth to a warrior prince in ‘Friday’s Child,’” according to this L.A. Times story. Got that? This wasn’t the area’s first star turn. The rocks had been a favorite film location since the 1920s. In the last half-century, the eerie landscape has appeared in several reboots of the “Star Trek” TV series and films as well as other productions.

Vasquez Rocks Natural Area and Nature Center is located at 10700 Escondido Canyon Road in Agua Dulce, about 49 miles from downtown Los Angeles. (Check out more in our 50 best hikes in L.A.) Here are a few more Halloween outdoorsy happenings.

Not-so-scary ride: OK, maybe you want to get in a bike ride well before you break out the candy corn. The L.A. Wheelmen are hosting two Halloween rides — one 27 miles, the other 15 miles — through parts of Beverly Hills, Culver City and West L.A. Yes, you’ll get to see the famed Witch’s House in Beverly Hills and stop for lunch at the Original Farmers Market. Costumes are optional. Meet 8:30 a.m. Sunday on Olympic Boulevard, one block west of La Cienega Boulevard. More info here.

Scary Stories: Cue the bonfire and let the ghost stories begin. Scary Stories in San Pedro takes place outdoors at the site of an old gun site (on a former U.S. Army base) with heavily graffitied walls, a naturally spooky spot. The Angels Gate Cultural Center at 3601 S. Gaffey St. in San Pedro hosts this evening of storytelling that’s just scary enough for adults and kids. It starts at 6:30 p.m. Oct. 30. You’re welcome to picnic on the ground — and bring your own chairs (or sit on the cold, hard cement flooring). Bundle up and be prepared to wear a face mask (not the Halloween kind). $5 donation suggested. If you prefer virtual stories with a virtual bonfire, between now and Nov. 2, watch YouTube videos by melaniejonesstoryteller.com and click on “witch.”

Here are 16 more activities to add to your spooky season checklist.

3 things to do this week

1. Last call for sign-ups for the 2021 L.A. Marathon. The L.A. Marathon hasn’t skipped a beat during the pandemic. The last in-person 26.2-mile race was March 8, 2020, right around the time Angelenos were awakening to COVID-19 precautions. The 2021 race, which also will be in-person, was postponed from March until Nov. 7 — and there’s still time to sign up. Online registration closes at 11:59 p.m. Pacific time on Oct. 31, your last chance to grab a spot (no race-week registration this year). The Health & Fitness Expo will still be at Dodger Stadium, but the route has changed. Race organizer the McCourt Foundation in this open letter to runners in 2020 said increased costs by the city of Santa Monica prompted the change in the finish line. The old Stadium to the Sea moniker is retired; now it’s called Stadium to the Stars. The marathon still starts at Dodger Stadium but now ends in Century City, with a turnaround at Mile 22 at San Vicente Boulevard and Montana Avenue, and repeated miles to the finish line. Check out the new route here. To sign up, go to the L.A. Marathon Registration page and pay $225. If you miss out or aren’t ready, don’t panic. The 2022 L.A. Marathon is scheduled for March 20.

2. Here’s a trick and a treat: skiing on Halloween. The atmospheric river that pummeled Northern California last week dropped big snow in the Eastern Sierra and Tahoe area ski resorts. Mammoth Mountain Ski Area in Mammoth Lakes, Calif., is set to open Oct. 29, two weeks earlier than scheduled, because of early-season snow. The 2-plus feet of fresh snow makes it the resort’s second snowiest October on record behind 2004. Seven runs with three lifts — Broadway Express, Face Lift Express, the Discovery Chair — and the Panorama Gondola to McCoy Station will open. There’s a chance top-mountain runs will open too. What does the pre-Halloween opening mean for you? First chair kickoff and costume contest (hard rock/metal theme) on opening day (Oct. 29), techno beats by DJ Channa from noon to 4 p.m. Oct. 30, and a Halloween scavenger hunt on Oct. 31. (Details and snow pictures @MammothMountain on social media.) Other resorts reported big snow too. Palisades Tahoe (formerly Squaw Valley) near Lake Tahoe on Tuesday reported 39 inches of snow at upper elevations and 27 inches at the Alpine Meadows base area. Palisades Tahoe plans to open Nov. 24.

3. Check out hot-air balloons over Lake Powell. Can you possibly bring more color to the stunning red sandstone cliffs that surround Lake Powell? Yes, but only once a year. The Page Lake Powell Balloon Regatta is back (canceled last year because of COVID-19) with more than 50 balloons launching around 7:30 each morning and an evening Balloon Glow from 6:30 p.m. to 8 p.m. (weather permitting). You can watch for free on Lake Powell Boulevard. There’s also a beer garden, street fair and live music planned. Lake Powell, by the way, is 186 miles long, with the northern part in Utah and the southern part in Arizona. It’s about an 8½- to nine-hour drive from downtown L.A. I checked online to see how much overnight stays cost from Nov. 5 to 7. Rooms start at $131 at the Courtyard by Marriott Page at Lake Powell and $156 at the Hyatt Place Page/Lake Powell. Check out these and other accommodations on the event’s website.

Roughly 10,000 sequoia, pine and conifer trees will need to be removed from Sequoia and Kings Canyon National Parks before full access to the parks can be restored. That’s the word in the wake of the lightning-started KNP Complex fire, which began Sept. 10 and burned more than 88,000 acres. The trees damaged by fire, drought, disease or age could fall on people or cars, according to the Associated Press. The removal will keep California 180, known as the Generals Highway, closed indefinitely, which makes it harder for visitors to see the world’s two largest sequoias, the General Sherman and General Grant trees. Both big trees were spared in the blaze. Cedar and Grant groves have reopened for day use; campgrounds and lodgings remain closed. The entrance to Sequoia National Park at Highway 198 and all roads in the park remain closed. Read the entire story here. Extinguishing of the KNP Complex fire was helped by recent rains and snowfall; it was 69% contained, as of Tuesday.

Popular hiking spots in the Cleveland National Forest have reopened, three years after the 2018 Holy fire swept through. The Holy Jim Trail to the waterfalls as well as other routes in Trabuco and Holy Jim canyons reopened for the first time since August 2018. Work to repair eroded and damaged trails was performed by the U.S. Forest Service and the Long Beach Conservation Corps. The fire burned for more than a month and torched 23,024 acres, according to the Forest Service. Trails that remain closed include the Trabuco Trail, West Horsethief Trail and the Holy Jim Trail above the waterfalls. Crews will continue to work to reopen these routes. Read more information here.

They did it! I first reported on Stanford students Sammy Potter and Jackson Parell, both 21, in January when they embarked on an audacious plan: Complete a 7,940-mile journey that would take them to three of America’s toughest and most iconic thru-trails in a single year: the Appalachian, Continental Divide and Pacific Crest trails. At 4:16 p.m. on Oct. 22, the pair finished, according to an Instagram post that read, “WE FINISHED THE PCT. Yeah, we finished the TRIPLE CROWN.” They are the youngest “calendar-year triple crowners,” Backpacker magazine reports. Here are stats they shared on social media of their incredible adventure.

The L.A. Zoo is making waves with an ambitious “20-year Vision Plan” that would cost $650 million. One sticking point for some environmentalists: The plan would remove “nearly all its remaining woodlands” to make room for tourist attractions such as rock climbs and a lodge-style California Center, this L.A. Times story said. Those native woodlands cover about 23 acres and provide home to coast live oaks, toyon and California black walnut trees as well as endangered shrubs.

Send us your thoughts

Share anything that’s on your mind. The Wild is written for you and delivered to your inbox for free. Drop us a line at [email protected].

Click to view the web version of this newsletter and share it with others, and sign up to have it sent weekly to your inbox. I’m Mary Forgione, and I write The Wild. I’ve been exploring trails and open spaces in Southern California for four decades.