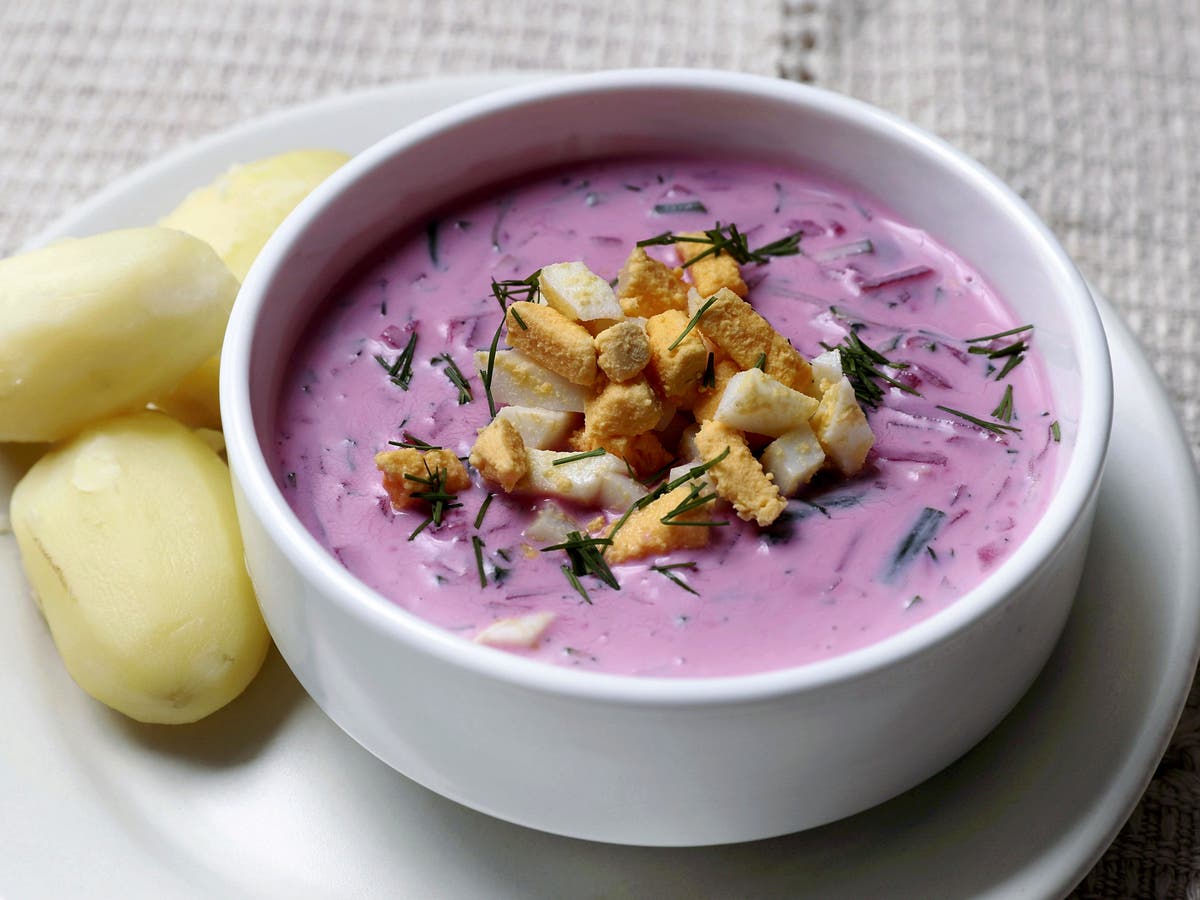 Culinary researcher Asami Kuchio, who is also a photo essayist, creates recipes inspired by dishes she comes across while traveling overseas.

In Lithuania she found the perfect dish: chilled beetrootroot soup. Its vivid pinkish-magenta hue and refreshing taste are sure to boost spirits.

Lithuania is a Baltic Sea country filled with forests and lakes.

Called Saltibarsciai, the soup is a mixture of beetroot and kefir – a beverage of fermented cow’s milk – as well as boiled eggs and herbs.

“It’s a local Lithuanian dish often served at restaurants and at home,” Kuchio says. “This is a good soup for the coming season.”

Kefir is made by adding yeast and lactic acid bacteria to milk and fermenting it, and has a milder taste than yoghurt.

In shops, it is often labelled as “kefir yoghurt”. However, it can be made at home by adding kefir grains to milk and leaving the mixture for a day. Unsweetened yoghurt can be used as a substitute for kefir, but it’s better to add fresh cream because yoghurt is too sour.

Boiling a beetroot with the skin intact helps keep its colour. Shop-bought vacuum-packed beetroot can be used, too. The key to this recipe is to soak half a julienned beetroot in apple juice.

“I was taught by Lithuanians this step would bring about a beautiful colour,” Kuchio says.

The thickness of kefir can be adjusted with water as desired. The soup should be seasoned with salt and pepper before the beetroot, green onion, dill, cucumber and boiled egg are added. The soup is then garnished with chopped boiled egg and dill sprinkled on top. Boiled potatoes are served on the side.

1. Boil the beetroot in a pot with the skin intact for 30 minutes to 1 hour. Insert a skewer into the beetroot to check the softness. Keep it in the pot to cool. After cooling, peel the skin and julienne the beetroot, soak half of it in apple juice and discard the juice when the beetroot is a bright-red color.

2. Julienne the cucumber and cut the green onions into 1cm lengths. Chop the dill and boiled egg into small pieces, and set aside a portion of each for the garnish. Season the kefir with 1 teaspoon of salt and pinches of pepper, and mix.

3. Put the green onion and dill in a bowl, sprinkle a pinch of salt, and rub by hand to bring out the aromas.

4. Mix the beetroot, kefir, green onion, dill, cucumber and boiled egg in a large bowl and chill in the refrigerator.

5. Pour into a soup bowl, and top with the remaining boiled egg and dill. Serve with boiled potatoes on the side.

This is a hearty soup geared for “eating” rather than “sipping”. The beetroot’s subtle sweetness and the dill’s refreshing scent spread throughout the mouth. The soup has a rich taste, but also leaves a refreshing aftertaste. Having this soup for breakfast is a great way to start the day.

Potatoes are a common feature in Lithuanian food.

“Spuds are so popular that they’re called the second staple food, after black bread,” Kuchio says, adding that potatoes served with an herb butter sauce are perfect for garnishing meat dishes.

Toss 200g of boiled potatoes with 1 tablespoon of butter, 1 teaspoon of chopped dill and pinches of salt.

“Adding grated garlic really spruces up this dish,” she says.