Kid Cudi on his ‘brother’ Kanye West, moviemaking with Leo and finally learning to love himself 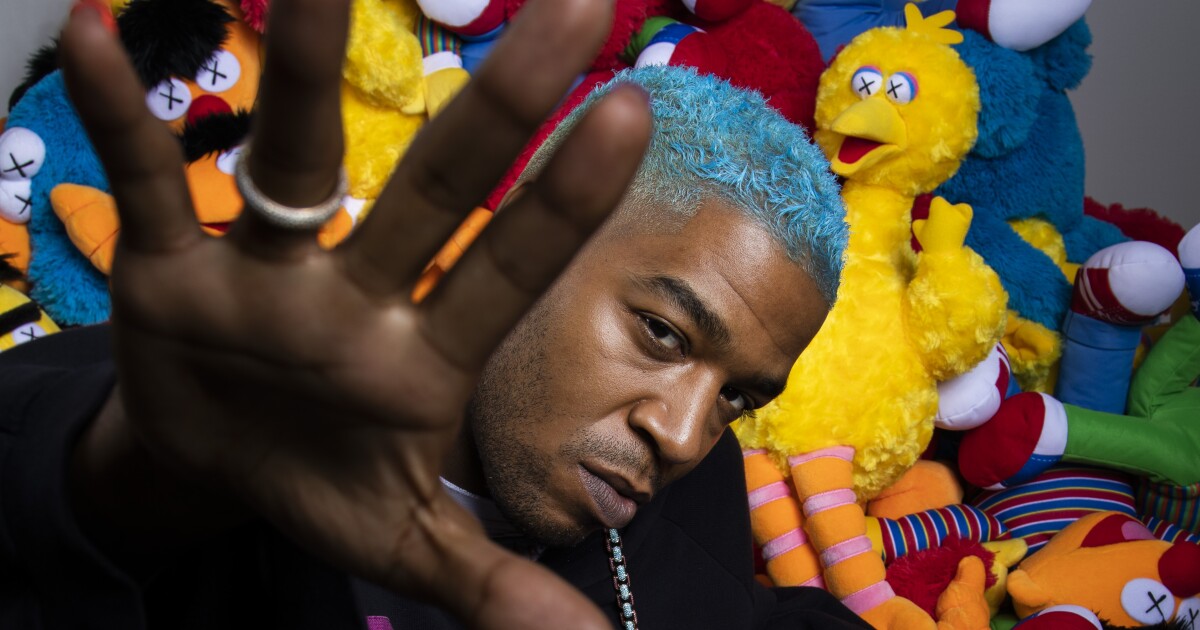 There is an illuminating moment in the new Kid Cudi documentary, “A Man Named Scott,” that captures the Ohio native’s improbable run to becoming a hip-hop superstar.

During a 2009 interview at New York’s Hot 97 radio station, Cudi was attempting to explain to stalwart host Funkmaster Flex how he managed to break through without the blessing of the rap industry’s gatekeepers. Cudi had been turning heads with his debut single “Day ‘n’ Nite,” a melancholy synth-heavy song about a lonely, self-loathing stoner struggling to climb out of depression.

“Now look at this / Madness the magnet keeps attracting me, me,” he confessed on the autobiographical track. “I try to run, but see, I’m not that fast / I think I’m first, but surely finish last, last.”

Cudi, born Scott Mescudi, had initially gained a small but passionate underground following after posting “Day ‘n’ Nite” on MySpace. Now, without a high profile co-sign or crew to burnish his street cred, he was seated across from one of the most influential DJs in the country. Flex was baffled.

“The whole internet rapper thing is very hard for me to understand,” Flex admitted, years before social media apps like TikTok became the go-to platform for music acts looking to go viral. “So you didn’t have a deal then … while this record has been playing on the radio?”

“I actually just got my deal two months ago,” Cudi responded with a laugh. “Yeah, we made it to Billboard without a deal.”

More than a decade after “Day ‘n’ Nite” reached No. 3 on the Billboard Hot 100 chart, Cudi, 37, is still laughing. His 2009 double platinum album, “Man on the Moon: The End of Day,” is widely credited with setting the stage for what’s become known as emo rap, a hip-hop subgenre that features a varied sonic palette and a ceaseless outpouring of emotion and vulnerability. Years later, Cudi’s DNA can be spotted in everyone from the late Lil Peep and Juice WRLD to Lil Uzi Vert, Trippie Redd, Travis Scott and Princess Nokia.

“You can see the look on Flex’s face,” Cudi recalls during a Zoom interview from his Calabasas home. “He just couldn’t understand how I could be working with Kanye and Hov without having to go through radio.”

Kanye, of course, is music and fashion icon Kanye West and Hov is Shawn “Jay-Z” Carter, a recent inductee into the Rock & Roll Hall of Fame and hip-hop’s first billionaire. Yet this is no subtle attempt at name-dropping. Cudi remains genuinely taken aback that the same kid who left Cleveland in 2005 with just $500 and a demo tape to pursue a rap career in New York, paid for studio time by working at Applebee’s and was evicted from his apartment within a few years was logging songwriting credits with two of the most powerful figures in music.

“I was part of this new era of hip-hop along with artists like Kid Sister and the Cool Kids,” Cudi says. “We were just doing our own thing. I remember, I couldn’t sleep before my debut album came out. I thought I had made a mistake. I was like, ‘I’m too weird for them. People are not going to f— with this.’ And then [the album] hit and, you know, it happened how it happened.”

It’s that same can-you-freaking-believe-this energy that jumps out when he discusses his latest movie role in “Don’t Look Up,” an upcoming Netflix comedy helmed by Adam McKay about a giant comet headed on a disastrous collision course with Earth. Cudi plays DJ Chello, a famous turntablist who is in a relationship with a pop star played by Ariana Grande.

“I was like, ‘Are you sure they want me?’” Cudi jokes about his reaction when he got word McKay’s team wanted to include him in the star-studded project that also features Leonardo DiCaprio, Jennifer Lawrence, Meryl Streep, Jonah Hill, Tyler Perry, Cate Blanchett and Chris Evans. “It was dope. I’ve known [Leonardo] for years from just being in New York. He’s always been a supporter of mine. But this was my first time meeting Jennifer and she was mad cool. It was ill just to be on the set with them … to kind of secretly fan out.”

Ever since his recurring, scene-stealing role as lovable hustler Domingo Dean on HBO’s “How to Make It in America,” acting has been a part of Kid Cudi’s expanding portfolio, which includes a BAPE clothing line, live concert app Encore and film production and management company Mad Solar.

But it’s clear from “A Man Named Scott” that music remains his most vital outlet. Directed by Robert Alexander, the Amazon Prime film, which premieres on the streaming service on Nov. 5, attempts to unravel the tangled mythology of the enigmatic artist.

But it’s the near-religious connection between Cudi and his fans, as seen in the doc’s electric performance footage, that separates Cudi from his hitmaking peers.

“I can finally get on stage and feel the love,” Cudi says, referencing the days when he was skeptical of his growing fanbase. “Because now I look in the mirror and I love what I see. And I know that I’m not just a regular artist on the stage where kids are just listening song to song and that’s it. No, kids are really there ready to [hear] a sermon. Like, I am their preacher.”

When executives from Complex Networks, co-producers of “A Man Named Scott,” first approached Cudi with the idea for the project, he immediately flashed to Brett Morgen’s acclaimed “Kurt Cobain: Montage of Heck,” an intimate 2015 documentary on the late Nirvana frontman.

“It’s masterful how [Morgan] was able to piece together all sorts of visuals, artwork and music to tell Kurt’s story,” says Cudi, when asked how he and Alexander came up with “A Man Named Scott‘s” dreamlike treatment, which includes dancers, actors and trippy special effects.

“Kurt had always been this figure in my heart who guided me through the music,” he continues. “I wanted to do something like that, where I could kind of explain some things a little bit more beyond a Tweet or an interview in a magazine. I just knew that we could trust Rob with the material. He was going to ask all the right questions.”

During the filming of “A Man Named Scott,” Alexander found Cudi’s restlessness as an artist refreshing, even when it led to missteps such as his critically panned 2015 rock turn “Speedin’ Bullet 2 Heaven.”

“It was always beautiful to see that his approach was based on following his feelings and personal preference versus public opinion,” says Alexander.

Songs like “Day ‘n’ Night,” “Soundtrack 2 My Life” and “Pursuit of Happiness,” which detail Cudi’s battles with alienation, anxiety and self-medication, sound nothing like the soaring luxury anthems of Rick Ross or the hood-stamped trap music of Jeezy, to name two of Cudi’s contemporaries. Yet Cudi’s confessionals connected with listeners who were going through many of the same struggles.

So what drove Cudi to revisit his inner demons in “A Man Named Scott”?

“I’ve never had the opportunity to tell it my way,” he explains. “And I wanted to control the narrative. I’m in a much better place and I feel comfortable talking about some things.”

And there’s a lot to unpack, from the devastating death of his father in 1995 to an arrest on drug charges in 2010 to a cocaine-fueled downward spiral, during which Cudi alienated his closest friends and peers. After experiencing suicidal urges, he promptly checked himself into rehab in October 2016.

It was during his darkest moment that Cudi got a much-needed shoutout from West. During a show in Houston, West praised his friend and protege as “the most important artist of the past 10 years.”

“My mom was visiting me,” Cudi recalls. “And [she] came up to me and was like, ‘Look at this.’ And it was Kanye in concert. I started bawling my eyes out. Like I just started weeping like a big baby. Because we had fallen out and there was beef. But that’s my brother. I just kind of realized in that moment … I realized that he really loved me.” The two would collaborate on an acclaimed EP under the moniker Kids See Ghosts in 2018.

Cudi has since found peace with his loved ones, his legacy and himself. He says in the documentary that the birth of his daughter, Vada, now 11, gave him the joy that he couldn’t find in his career, and that he now regrets that he put the women in his life “through so much drama.” When the subject turns to younger artists like Jaden and Willow Smith and Lil Yachty hailing him in “A Man Named Scott” as a change agent whose music has helped some struggling kids live for another day, he takes it all in stride.

“Makes you feel like a dinosaur sometimes … but, you know, it’s really cool,” muses Cudi, who last year dropped his seventh studio album, “Man on the Moon III: The Chosen.” Next up: a duet with Ariana Grande, a collaboration with Jay-Z for the buzz-heavy western flick “The Harder They Fall” and a forthcoming Netflix adult animated series “Entergalactic” with “Black-ish” creator Kenya Barris, based on Cudi’s upcoming album of the same name set for next year.

“Of course every artist wants to sell some records, but my main goal is to inspire,” he says. “I can go to sleep at night with a smile on my face knowing that I’m helping people.”

Food dished up robotically from the ceiling at Beijing Olympics | Lifestyle