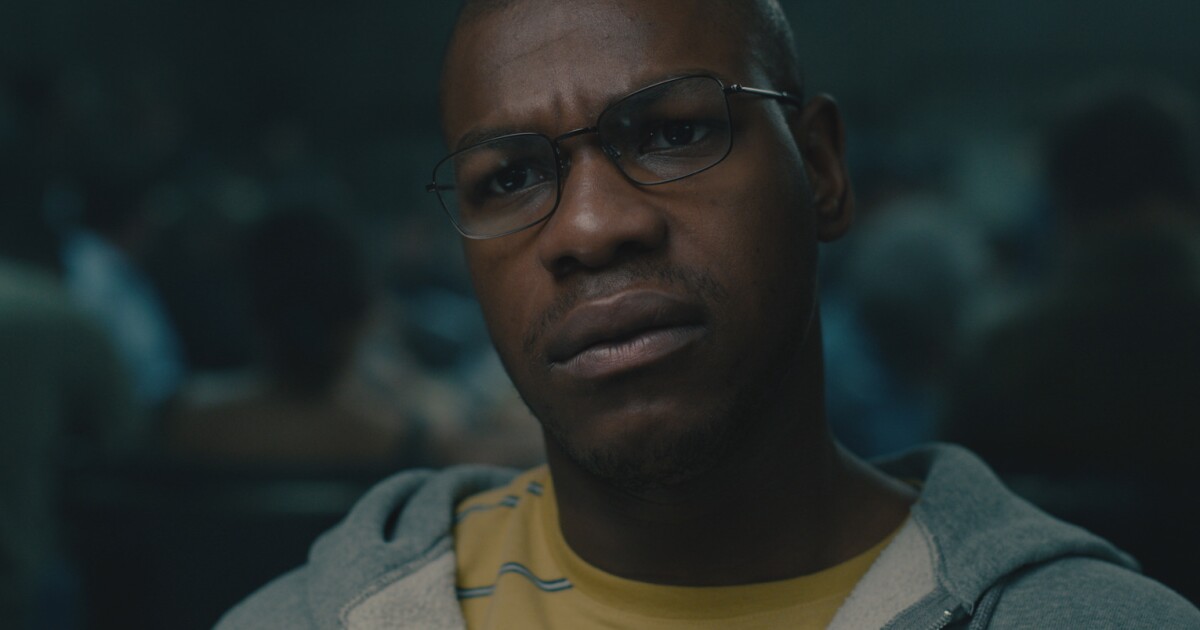 Brian Brown-Easley, 33, entered a branch of Wells Fargo in the Atlanta suburbs and slid the teller a note saying he had a bomb. A Marine veteran, Easley had been struggling to survive solely on a measly disability check from the Department of Veterans Affairs. When the monthly payment dried up, he faced certain homelessness but was repeatedly turned away by the Veterans Crisis Line and a regional VA benefits office.

At the bank, he allowed everyone but two employees to leave before alerting 911 and a local news station of what was happening. He said he had no intention of robbing the bank and would let the employees go if he ultimately decided to detonate the bomb. He just wanted the $892 owed to him by the VA.

In “892,” premiering today in the U.S. dramatic competition at the Sundance Film Festival, John Boyega stars as Easley on the final day of his life. Directed by Abi Damaris Corbin from a screenplay she co-wrote with playwright Kwame Kwei-Armah, the ensemble includes Nicole Beharie, Selenis Leyva, Connie Britton and the late Michael K. Williams in one of his last roles.

Corbin first heard about Easley after reading Aaron Gell’s article “‘They didn’t have to kill him’: The death of Lance Corporal Brian Easley,” which was published in 2018. “It broke my heart,” said the director, whose father is also a veteran. “I saw in it a reflection of my dad’s story. He’s gone through a lot of the struggles with the VA that are threaded through Brian’s story and I knew that story had to be told.”

Kwei-Armah, who was enlisted to co-write the script, likened the writing process to a dance. “Collaborating is a relatively new thing,” he said. “But actually, I really enjoyed our sessions together. Abi did a draft, then I would do a draft and then we drafted together and beat it all [together].”

Since he was writing from London and she was writing in Los Angeles, “The process was really very vigorous,” he said. “We would stand our ground [in disagreements] but the beautiful thing was we had each other’s hands when we got notes from other people. We would have philosophical discussions and the dance was a very wholesome one.”

“It was a distinct honor to fight with Kwame in a good, healthy way throughout the creative process,” said Corbin. “Because when you’re passionate about something, you have to come to the purest version of it, and the only way to do that is through discussion.”

Boyega was considered for the role of Easley early on. “I gave John, I think, his very first job as an actor onstage when he was like 16 years old at the then-Tricycle Theatre in London,” said Kwei-Armah. “And as soon as we got to the end of the first draft, I went, ‘Look, I think this is John.’”

They sent an early draft of the script to his agent, but the actor couldn’t commit due to scheduling conflicts. “I loved it but I just kind of let that go and they moved on,” said Boyega. “And it all came full circle [years later] when they needed someone to get the movie greenlit again. [The role] was a great opportunity to show versatility. … I was shocked that I hadn’t heard of what happened to Brian and I was moved by his story and the drama of the circumstance.”

“John and I had a conversation and it was very clear that he understood the heart of the story,” said Corbin. “The nuance that he showed as Brian was just inspiring every day on set. John’s first day on camera [fell on] the anniversary of Brian’s death. And when John stepped on camera for the first time as Brian, we had a moment of silence and the world faded away. We saw Brian on camera. It was the spirit of Brian that touched us, and we’re so grateful that John is able to bring the truth of Brian’s story to life.”

To ensure Easley’s story would be portrayed accurately, the cast and crew reached out to Easley’s ex-wife and daughter. “We wanted to make sure that we respected and honored Brian’s story in every step, so we would never tell the story without connecting to them,” said Corbin. “[His ex-wife, Jessica, has] watched the film and is very grateful that the story has been told and it’s not just known to them.”

Corbin, Kwei-Armah and Boyega connected with her recently via Zoom to gauge her feelings about the movie. “After about 10 minutes into the conversation, she still hadn’t commented on the film,” Kwei-Armah recalled. “And we were a bit like, ‘OK, that means she hates it, get ready.’ And then she said [to John], ‘Not only did I love the movie, you look like my husband.’ And that is a real testament to Abi and John, that they did such a good gig that she could see the truth. That was really touching for me.”

“There’s definitely an emotional weight playing somebody that has existed who has had to live a tragedy in order for you to play him,” said Boyega. “[Jessica] told me it felt like I captured Brian. She was real descriptive of the experience of taking it in. She said that this movie is a direct lineage to Brian’s legacy: Brian wanted the world to know what was going on, how much frustration this was for people who’ve sacrificed so much for their country. The story is really [about] the isolation and betrayal that comes with serving your country and then coming back home to no opportunity or true help.”

“I think why I found myself attracted to [the story] was [seeing] someone who says, ‘I need to have my story told and this is the best way that I can do it no matter what happens to me,’” said Kwei-Armah. “He’s kind of a 21st century bank robber because he goes into the bank and goes, ‘Yo, hook me up with a local TV station and let me tell my story.’ Like this is Instagram Live. Pre-TikTok, he was TikTok-ing. And that tells us something about the man. If he could tell his story in that way, then I could help to tell his story in another.”

While the filmmakers surrounded Boyega with a top-notch cast — including a standout Beharie (“I learned a lot of things from her, I think she’s just incredible,” says Boyega) — the chance to see Williams onscreen one more time proves the most bittersweet. Working with the Emmy-nominated star of “The Wire” and “Lovecraft Country,” who plays a hostage negotiator in the film, was “epic,” said Boyega. “I’m really glad I got the chance to work with him, especially in his last days, and see his artistry. [He was] very positive on set. A good, bubbly guy. And at the same time just effortless with his humility.”

As they prepare to launch the film at Sundance, the filmmakers hope to shine a light on corners of the system that remain broken. “The article was called ‘They didn’t have to kill him,’ and ultimately I think that’s the gig,” said Kwei-Armah. “This film is born of a time when it’s really important that we address the violence that is happening across our nation. And I think this sits within that wave of art that wishes to say, ‘This is the time that we’re living in and we quickly need to move past it.’ We’ve got to treat people right or this happens.”

“We’ve seen so many broken systems around us,” said Corbin. “And as creators, we want to say, ‘Hey, compassionate engagement can help repair those.’ We want people to look at their neighbor and not turn a blind eye. As Brian says, do right by people.”

“I feel like movies are there to make us reflect, make us think, and in some ways make us brainstorm how we can be a part of that change,” said Boyega.

“Ultimately we remember civilizations based on their art,” said Kwei-Armah. “Art is how you define and remember a civilization and cinema is our high art. It has the power to catalyze debate and new thinking that ultimately can change human beings. And it absolutely is the role of art, the role of cinema, to catalyze change.”