‘It’s a time to be joyous’: How people are celebrating Diwali without restrictions 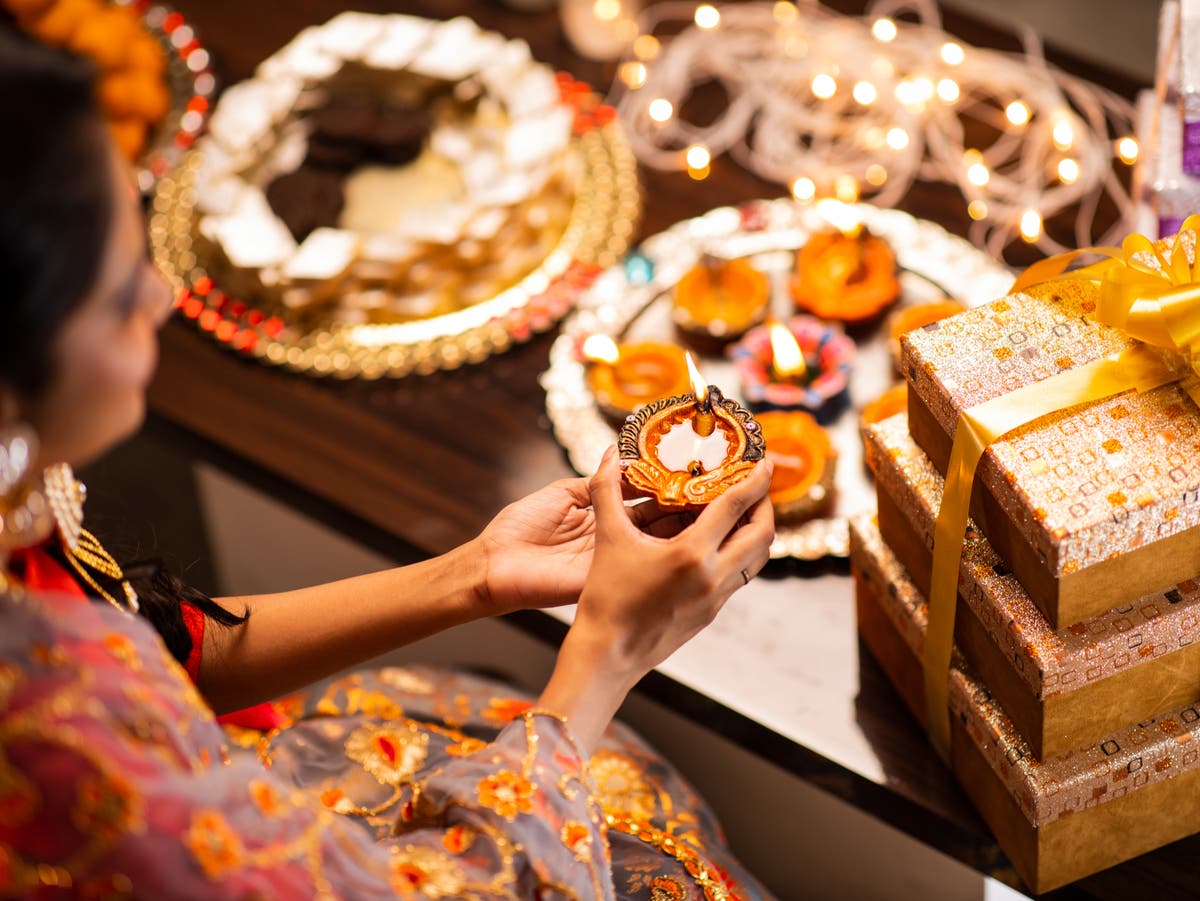 This week, Hindus, Sikhs and Jains across the UK will celebrate Diwali, also known as the “Festival of Lights”. With the last of Covid-19 restrictions having been lifted this July, the five-day long celebration will see friends and family gather at religious temples, exchange gifts and share cultural delicacies.

While Diwali will take place on Thursday for all three religious groups, each will be celebrating for varied reasons. For the UK’s Hindu population – which sits at roughly 817,000 as per the 2011 Census – Diwali marks the day goddess Durga defeated a demon named Mahishasura, and is a celebration of “the victory of light over darkness” and “good over evil”.

In Sikhism, Diwali is called Bandi Chhor Divas, which translates as “day of liberation”. For the UK’s 423,000 Sikhs, it commemorates the day the sixth Guru of Sikhs, Guru Hargobind, was released from prison in the Indian city of Gwalior. For Jains, Diwali is the anniversary of the day Lord Mahavir attained moksha – freedom from the cycle of reincarnation.

Last year, Diwali took place on 14 November; 11 days after Prime Minister Boris Johnson announced the second national lockdown. The restrictions cancelled the possibility of large family gatherings, and the elaborate firework displays that usually take place up and down the UK, and closed places of worship. Despite the easing of restrictions across the country, some Hindus, Sikhs and Jains are still hesitant about mixing in large gatherings of people this Diwali. In the past week, the UK recorded 280,479 new cases of the virus. As of 2 November, 1, 131 people have died in the 28 days after receiving a positive test result.

Shashi Aggarwal, 70, and her husband will not be spending Diwali with their children and extended family due to concerns about the spread of Covid-19. Instead, she will send food parcels to her children and grandchildren. These will include South Asian sweets, called “mithai” – the sharing of which is an important aspect of Diwali.

“I’m doing all my normal Indian sweets which I normally cook every year,” she says. The star of her parcels will be Gulab Jamun, a round, milk-based sweet which is soaked in a fragrant syrup flavoured with rose water and cardamom. “If there’s one thing, I am really good at, and I’m famous for, it’s my Gulab Jamun,” she says proudly. “And I do savoury as well, like Bombay mix, and a mix of toasted nuts,” she adds.

It will be the second year in a row that Shashi will be having a quiet celebration at home. Before the pandemic, 15 different families would come together at a designated home, where each party would bring a different dish to feast on before a large firework display took place in the garden. This year, she will spend the day decorating her home with fresh flowers and making a Rangoli, an artful decoration created at the entrance of the house which signifies good luck and prosperity.

Others are embracing the opportunity to to celebrate with extended family. Ahead of welcoming her children and grandchildren to her home on Thursday, Neelam Aggarwal-Singh, a founding member of the Indian Hindu Welfare Organisation, has also been busy preparing their favourite sweetmeats.

“We will obviously be making the favourite sweet of my family, which is Gajjar [carrot] ki barfi,” she says. Barfi is a type of mithai made from powdered milk and sugar, and in this case, carrots. “It has become a family tradition, that Diwali is not the same without Gajjar ki barfi. And my children start requesting this from long before Diwali, calling me and saying, ‘Mummy don’t forget to make lots of it’,” she says.

While a Diwali without restrictions has given entire communities the freedom to come together for feasting and firework displays, for many, it may also be the first Diwali without loved ones lost during the pandemic. Ravi Bhanot, 60, who lost his 52-year-old sister to coronavirus this year, says that while the loss means celebrations will be more subdued than previous years – with his family choosing not to exchange presents – Diwali is “a time to appreciate what you have got”.

“It’s celebrating the good over evil, and a time to be joyous. It’s been a devastating year, but Diwali is an excuse to be happy and to rejoice,” he says. This year, Light Up London, a group dedicated to organising Diwali events, of which Bhanot is a co-chairman, is hosting a “Diwali Night” in Chigwell, Essex. On Saturday, 6th November, crowds will gather to exchange traditional sweets, hold sparklers and watch as trees are illuminated with lights. Shortly after, they will be served a hot meal including a variety of Indian dishes.

A common aspect of Diwali celebration amongst Sikhs, Hindus and Jains is visiting the holy temple to pray and pay homage to each religion’s respective deities. Separately, each group will also perform religious rituals at home. Aggarwal-Singh, a Hindu whose family hails from the north of India, leaves lights burning around the house the night before Diwali. The belief is that Goddess Lakshmi, the goddess of wealth, fortune, power, beauty and prosperity, may visit you at any time.

As recent studies show that the UK public is becoming more conscious of the climate crisis, concern for the environment is also impacting Diwali celebrations. A survey of 4,000 UK adults, conducted by insurance company Aviva, found that 52 per cent of people are more environmentally-conscious now than they were before the pandemic.

Kajal Sheth, 41, a Jain, will be celebrating with her immediate family and a few cousins by visiting their local temple together and sharing sweets. While fireworks are a common theme of Diwali celebrations, the family will not be having a display of their own. “We tend to avoid doing fireworks simply because of the environmental pollution it causes,” she says. According to the London Air Quality Network, as fireworks explode, they release fine dust particles that are rich in toxic metals into the air. “These particles can enter your lungs and aggravate the symptoms of those suffering from lung diseases. In addition, smoke from bonfires contains carbon monoxide and other pollutant gases,” the organisation said.

“It’s always so beautiful to see all the colourful displays, but with fireworks being harmful to the environment and to the tiny creatures in the surrounding areas, we choose not to do them,” Sheth says.

Although Diwali celebrations will differ across the UK; some people are taking advantage of a festival without restrictions while others feel threatened by the number of persistently high Covid-19 case numbers, more than 18 months of the pandemic has highlighted “an appreciation for spending time with the family for everyone”, says Khushy Patel, 29. As she comes from a small household – her and her mother – they will be celebrating the Hindu New Year, which falls on Friday, with cousins and family friends.

“Before Covid-19 hit, everyone was so busy with their lives. So I think now, everyone’s putting more emphasis on celebrating Diwali, because we’re now appreciative of the fact that we can see each other and spend time together,” she says.

Three non-boring recipes to brighten up your week