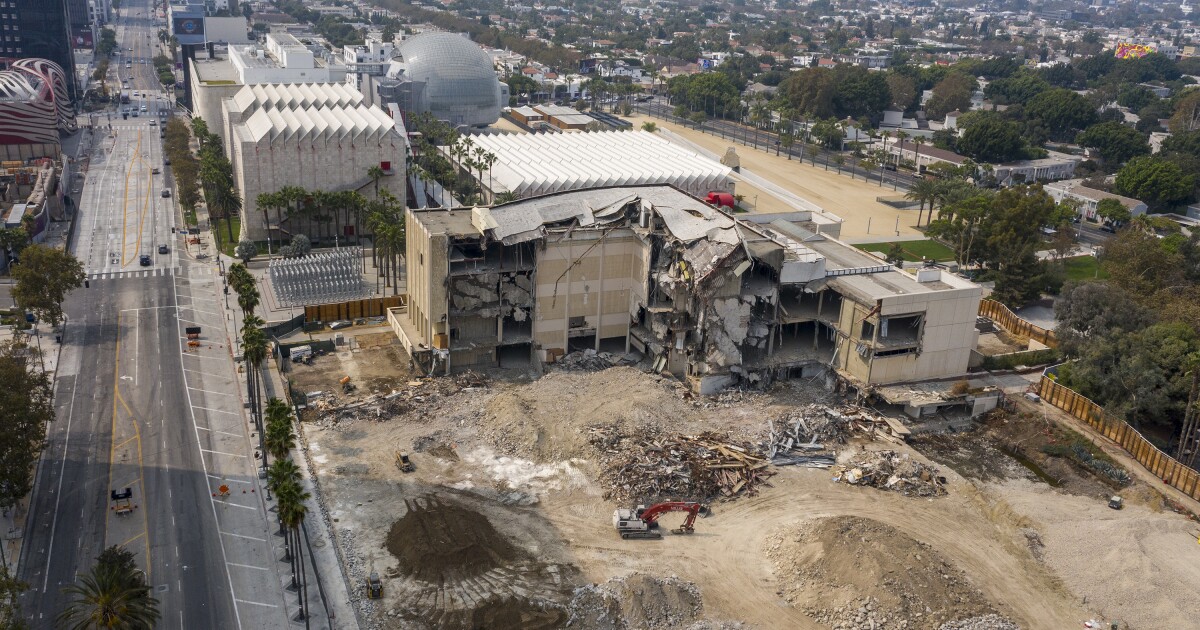 The immense fundraising challenges for the Los Angeles County Museum of Art’s $750 million new building crystallized in an interview with LACMA Director Michael Govan, who told The Times this week that the campaign stands at $679 million — a mere $24-million jump from where it stood more than a year ago.

LAMCA is racing to complete its controversial new building, designed by Pritzker-winning Swiss architect Peter Zumthor. Construction of the building, which LACMA aims to complete in 2024, has slowed this year due to on-site fossil finds, as Govan acknowledged. Construction costs, considering supply chain issues, labor shortages and inflation, could easily be ballooning. Fundraising has been sluggish at best.

Still, the museum director is unfazed: “I feel pretty great — it’s been historic what we’ve achieved,” Govan said of where fundraising stands given the pandemic. Were it not for the more than yearlong, COVID-related museum closure, he added, “we’d be even further.”

“With your museum closed it’s hard to take people through and talk about what you’re doing,” Govan said of why gifts to the campaign have lagged. “But since the summer we’ve been back at it, and there are a lot of new people and seven-figure gifts from people who had never been involved with LACMA before.”

LACMA’s most recent financial statement for fiscal year 2020-21, an independent audit published on its website, says the museum had, as of June 30, pledges that it valued at more than $160 million. Govan, however, said that figure wasn’t necessarily reflective of overall pledges as “there are all kinds of pledges — some are legally binding but not bookable until a certain date,” he said. “They’re all binding pledges, though, meaning the same as cash in the sense that we can count on them.”

The museum received $150 million from entertainment mogul David Geffen in 2017, $50 million from casino and hotel magnate Elaine Wynn, co-chair of LACMA’s board of trustees, in 2016, and $50 million from Los Angeles-based W.M. Keck Foundation in January 2020 (Keck Chief Executive Robert A. Day is a LACMA life trustee).

Major gifts to the campaign are now stalled. “We are not making any announcements of new gifts at this time,” museum representative Jessica Youn said in an email.

Time is now the biggest enemy. As construction drags on, costs rise; as of last fall, the targeted completion date for the building was 2023, a year earlier than the current timeline. Govan, however, insists that the overall cost of the project — which he puts at $650 million, with $100 million allotted for “contingency costs” such as the increased price of building materials and labor — has not changed.

Will the county have to bear the brunt of funding shortfalls should costs swell beyond the $100 million contingency costs?

Put simply: “No,” Govan said. “They’re not on the hook for more because the whole point was to create a big influx, a new high bar, for private money going into culture in Los Angeles.”

LACMA’s future building, the David Geffen Galleries, has been a lightning rod for criticism over its amorphous, blob-like design, its single-story exhibition hall raised on piers and straddling Wilshire Boulevard, as well as its reduced square footage, 10% smaller than a previous Zumthor design. Its growing cost — the initial price tag on the project was $600 million — and projected debt has also been controversial. And Govan’s vision for the new LACMA — a nonhierarchical, decentralized museum showing rotating installations of the permanent collections along with art at satellite locations — has been nothing if not divisive.

The pandemic has not helped matters: LACMA, which charges $20 adult general admission to Los Angeles County residents, was shuttered for more than a year. In fiscal year 2018 — the most recent year the museum was open for 12 months — LACMA earned about $5.6 million in admissions revenue, according to its 990. The museum reopened to the public in April.

How art would be displayed in the new galleries was, for a long time, a mystery. The museum delayed the release of its much-anticipated floor plan for the new building multiple times. Govan initially promised the plan by March 2020. Then in April, the release date was rescheduled for early summer. LACMA finally revealed the plan in September 2020. The new building will feature 110,000 square feet of exhibition space.

Three buildings now remain on LACMA’s bare bones campus: Bruce Goff’s 1988 Pavilion for Japanese Art, the Broad Museum of Contemporary Art (BCAM) and the Resnick Pavilion, the latter two of which went up in 2008 and 2010, respectively.

Meanwhile construction of the new building is moving forward, currently focusing on installation of the foundation. Excavation and shoring is taking place on both sides of Wilshire along with the pouring of concrete for basement walls in areas on the north side of the boulevard.

The construction process, however, has been studded with, one could say, some sticky issues.

In late January, the big cranes came down on the north side of Wilshire because the ground beneath the museum — which sits next door to the La Brea Tar Pits & Museum — was settling beneath them, an issue caused by “soil and tar conditions,” Youn said. The crane foundations needed to be adjusted and they were replaced with lighter, mobile cranes without delaying the project. Youn said the museum is now doing extensive foundation pile testing and installing additional foundation piles, providing the primary support for the building as it rests on the ground.

“The cranes are a non-issue,” Govan said, when asked how the problem has affected timeline and budget. “There’s no time lost.”

This past summer, however, the museum faced another, ancient issue that did cause significant delays: fossil finds. During excavation on the north side of Wilshire — a process monitored by paleontological consultants as LACMA is a fossil-rich site — Ice Age tar pit deposits turned up along with the remains of extinct animals such as ground sloths and saber-toothed cats.

“It’s great for science, it’s not great for our timeline,” Govan said, adding that the issue has created “months of delays.”

What does that translate to in terms of increased costs?

“Until the project is done, we won’t know all of that 100%,” Govan said. “Once we’re through the fossils we’ll have more information to identify all of this.”

There are bright spots: Though the museum saw a drop in revenue — from $287 million in fiscal year 2018 to $153 million in fiscal year 2019 — LACMA’s endowment, like so many museums, grew during the pandemic. It’s now more than $175 million, according to LACMA’s 2020-21 financial statement — that’s a 37% rise during the 15 pandemic months leading up to June 2021. The museum also receives more than $30 million in county support annually toward its $70 million operating budget, according to its most recent financial statement — that’s roughly the equivalent of having an additional $600 million endowment as museums, on average, draw 4-5% in interest on endowment funds.

However, the museum now has nearly $822 million in debt, according to its most recent financial statement. It will have to start paying back a $300-million loan, from Los Angeles County to support the building project, as of 2022 — the first payment is set at $4.2 million. The loan is not part of the overall fundraising total.

Until recently, Govan received free housing as a perk of employment, bringing his compensation, in fiscal year 2019, to almost $2 million.

As the building project budget grew, Govan’s housing situation shrunk. In September 2020, Museum Associates, the nonprofit that oversees LACMA, put Govan’s Hancock Park home up for sale for $6.6 million. He moved into a less expensive Mid-Wilshire area home that the museum owned. In February 2021, the museum put that house up for sale for $2.4 million. As of March of this year, Govan has been living in a high-end Malibu trailer park not paid for by the museum.

“It was a great thing — it was something we could do during the pandemic,” Govan said. “So it’s good, we’re good. I do a lot of driving now.”

LACMA will welcome guests on Saturday to its annual Art + Film Gala, this year honoring artists Amy Sherald and Kehinde Wiley as well as filmmaker Steven Spielberg. A splashy affair attended by celebrities, civic leaders and international artists, the event is the museum’s premiere fundraiser. The last in-person gala, in 2019, honored assemblage artist Betye Saar and “Roma” writer-director Alfonso Cuarón and raised more than $4.6 million for the museum’s programming, exhibitions and acquisitions.

On Sunday, LACMA will open two major exhibitions. “The Obama Portraits Tour” will feature the official portraits of President Barack Obama and former First Lady Michelle Obama by Wiley and Sherald, respectively. The works were unveiled at the Smithsonian’s National Portrait Gallery in 2018 — Wiley and Sherald were the first African American artists to be chosen by the institution for such commissions. The exhibition, part of a five-city tour, was organized by the National Portrait Gallery.

LACMA is also debuting “Black American Portraits” featuring about 150 works, mostly from the museum’s permanent collection, that “center Black subjects, spaces, and makers,” as the museum describes it. The show, which spans 1800 to the present day, is a tribute of sorts to a 1976 LACMA exhibition, “Two Centuries of Black American Art,” which was a pioneering survey of African American art at the time.

In the final months of 2021, and just days before the gala, Govan says he’s approaching fundraising “with a lot of confidence.”

“Here’s the thing about fundraising,” he said. “The more you do, the more you can do. It’s not an exhaustible resource, it works the opposite way.”

How long it takes to see results from a new workout routine, according to a fitness expert