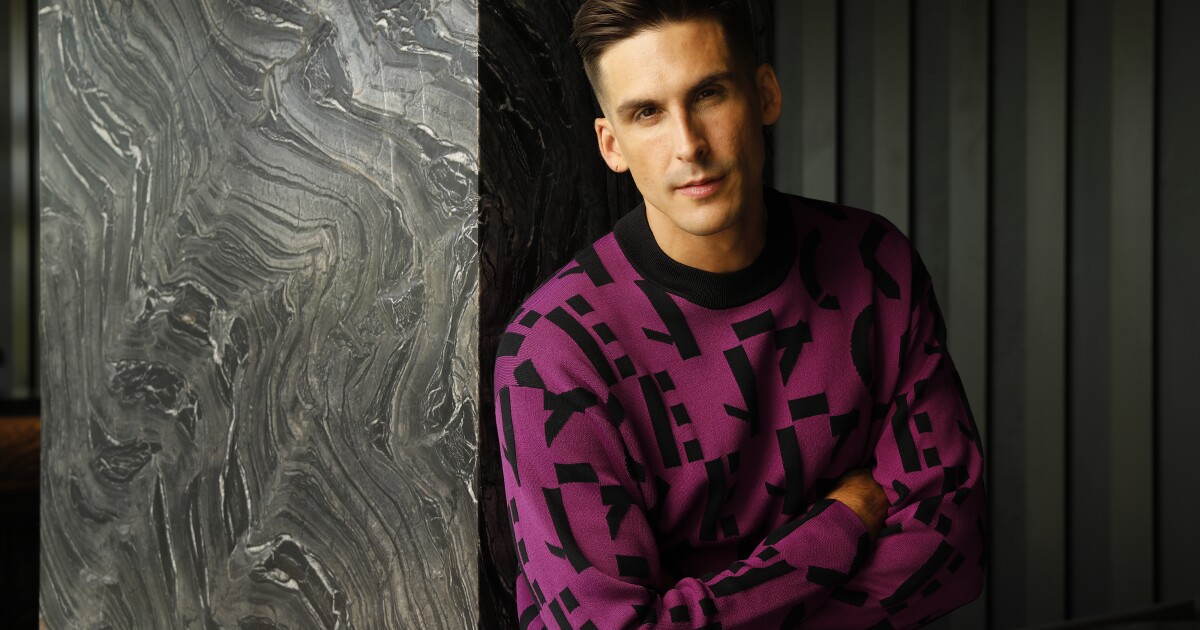 Before the COVID-19 pandemic, Cody Rigsby was rarely recognized on New York’s Fire Island. It was a sanctuary, a place where “nobody knew my quote-unquote celebrity,” says the Peloton instructor, who has been inspiring users to climb imaginary hills since 2014.

“A lot of my demographic are women in the 30-to-50 age range that live in suburbia or middle America,” he says, noting that he’d sometimes get noticed while visiting his mom in North Carolina. “There are not a lot of those on a very gay island.”

Things changed when COVID-19 struck. As people looked for ways to stay fit at home, Peloton grew exponentially — from 1.6 million users in early 2020 to 5.9 million in June 2021.

So did Rigsby’s fame: Something about his exuberant teaching style resonated with people during a period of isolation and uncertainty.

This new reality dawned on Rigsby when he returned to Fire Island this summer, after a year spent doing little besides going to the empty Peloton studio in Manhattan. Instead of the blissful anonymity he once enjoyed, people would come up to him at brunch to ask for a picture. Sometimes they were celebrities.

“I have to put a little bit more of a guard up now,” he says via video conference from Los Angeles, where he’s capping off a life-changing year with a stint on “Dancing With the Stars.” “Because if I’m out with friends and I’m having a good time, which probably includes drinking” — he rolls his eyes for comic effect — “I don’t want to be too messy.”

This self-deprecating candor is part of what has made Rigsby, 34, an unusually approachable fitness guru — a virtual confidant who helps distract from the pain of a grueling workout by trash-talking Justin Timberlake and sharing cute stories about his boyfriend.

According to social media metrics, he is Peloton’s most popular teacher, with nearly a million Instagram followers. His 30-minute Britney Spears class has been taken 650,000 times and counting — more than any other of the same length. Kristen Welker of NBC News took Rigsby’s classes to help her prepare to moderate the second presidential debate in 2020.

Not bad for a job Rigsby took to earn a few hundred bucks while trying to make it as a professional dancer.

Like members of the boy bands that Rigsby so often talks about, each Peloton instructor has a distinct personality type and teaching style: There’s the Spiritual One, the Quiet One, the Technical One. Rigsby is the Fun One, effortlessly playing the role of “everybody’s gay best friend,” as colleague Emma Lovewell puts it.

While other instructors focus on form or motivational pep talks, Rigsby, who has Mickey Mouse ears tattooed on his arm, peppers his class with kitschy catchphrases, stray pop culture observations and rants about his personal pet peeves. He’s been known to sound off on everything from Olive Garden breadsticks to the horrors of the Chuck E. Cheese ball pit. In his popular themed class XOXO Cody, Rigsby spouts sex and love advice to a boisterous pop playlist.

More than anything, he loves Spears. Whenever her music plays during class — which is often — he exhorts his followers, “When we play Britney, we f— s— up.”

Rigsby’s lighthearted approach has endeared him to users, who upload his humorous diatribes to TikTok and YouTube. On Etsy, you can buy Cody Rigsby prayer candles and mugs. There’s even a fan club.

Still, when Rigsby was announced as a “DWTS” cast member in September, some scoffed at the idea of a spin instructor as a bona-fide “star.”.

“Celebrity isn’t the same celebrity it was when we started this show. It is a much bigger world than just people who are on television,” says co-executive producer Deena Katz, who has increasingly cast influencers and other personalities who don’t fall into traditional categories of celebrity.

Cody’s advice to the stars

Rigbsy is known for his straight talk about celebrities. We asked him to sound off on a selection of famous people and characters.

Carrie Bradshaw: Please fire whoever is the stylist on this new “Sex and the City.” What happened to Patricia Field? You let her go to “Emily in Paris” and you guys regret it.

Bennifer: Ben, don’t don’t be surprised if you get your heart broken, so don’t get rid of your friends so quickly. You might need them.

Kim Kardashian: Girl, haven’t you made enough money? Just go retire, do nothing. And please don’t go back to Kanye.

Lovewell, who has known Rigsby for about a decade, thinks there is something unique about the intimate yet virtual relationship between Peloton instructors and their audience.

“You’re encouraging them, you’re making them uncomfortable and out of breath and sweaty. They’re trusting you with their bodies, their minds and their hearts. It’s a very different experience than just watching somebody on a movie screen..”

Part of Rigsby’s appeal is his own story of triumph over adversity. His father died of a drug overdose when he was a few months old. He was raised by a single mom — first in Burbank, then in Greensboro, N.C. Money was tight, and there were periods of homelessness.

The hardship “forced me to step up to the plate and be responsible for myself at a very early age,” says Rigsby, who is more earnest and subdued in conversation than his exuberant Peloton persona would suggest. He speaks thoughtfully about how therapy helped him work through the emotional baggage of his childhood, and how he relocated his mom, Cindy — who struggles with a variety of health problems — to Brooklyn, “so she can be comfortable and have as much joy as she can.”

Rigsby says he was always a natural performer, teaching his sixth-grade classmates the choreography he picked up from Spears’ videos. Though there was rarely enough money for dance lessons, he became involved in show choir and musical theater. “I really thrived in those spaces and got to express myself in really conservative North Carolina,” he says. “Even though people made fun of me for being gay, I still loved being onstage.”

After college, this led him to New York to train as a dancer, juggling professional gigs (performing with Nicki Minaj at a Victoria’s Secret fashion show) with whatever side hustle would help pay his bills (cater-waiter jobs).

Lovewell, who first bonded with Rigsby when they were hired to dance at a lavish Venetian-themed wedding in Washington, D.C., was immediately struck by his sense of humor. “He says the things you’re thinking but would never say out loud, but it’s not mean,” she says. “It’s this delicate balance.”

Rigsby was working at the Box, a nightclub on the Lower East Side, when he heard about a new fitness company looking for performers interested in teaching. He sent in a headshot to Peloton, figuring it would be a good side hustle, landing the job after a 10-minute interview. He remembers inviting his friends — “twentysomething gay New Yorkers who will read you for filth if something’s bad” — to an early trial class. Within a year, he was teaching Peloton full time.

Cody’s advice to the stars

Nicki Minaj: You literally are the best female rapper of all time. I feel that often you forget that and it comes out in insecurities.

Adele: Enjoy the reign you’re about to have.

Britney Spears: Do you and live your life. And be happy. Don’t worry about being pressured to make music or perform. The fans will still love you. Go have sex with Sam and have babies.

Peloton is “fitness meets entertainment,” says Rigsby, one of several instructors with a background in performance (British instructor Bradley Rose even appeared in a Hallmark Christmas movie). “There’s a lot of people who can give a credible [fitness] class. But how do you keep people engaged? How do you keep people wanting to come back for more? I think it is the stories that we tell, the vulnerability that we show, the laughter that we share.”

“DWTS,” where he’s competed against Melanie “Sporty Spice” Chisholm, has been the realization of a childhood dream — literally. As a kid, he used to have a recurring dream in which he was friends with the Spice Girls. “I think it stems from watching ‘Spice World’ so many times,” he says.

Still, the “DWTS” experience has been challenging. For the first few weeks, he was flying to L.A. to tape the show, then returning to New York to teach Peloton. Worn down, Rigsby got a breakthrough case of COVID-19 and was forced to compete virtually from his apartment, dancing with partner Cheryl Burke via split screen — to Spears, no less. “I’m still gutted,” he says. To maintain his sanity, he’s staying put in L.A. for the remainder of the show, teaching from a makeshift studio in Peloton’s Pasadena showroom.

The judges have not been particularly kind to Rigsby, but his scores are improving. An avid fan of “RuPaul’s Drag Race,” Rigsby is savvy enough about reality TV to take it in stride. “I have to remind myself not to be a victim of a television storyline,” he says, “and to have fun, because that’s what this is all about. To quote myself: ‘It’s not that deep, boo.’”

However his “DWTS” journey ends, he has been introduced to a larger audience through the show, and it has opened up opportunities beyond the bike.

Rigsby isn’t the type to have a five-year plan, but he’d love to do something else on TV, maybe as a judge or host. “If RuPaul is listening, I’m completely open to doing ‘Celebrity Drag Race,’” he says. “I just want whatever I do to be rooted in bringing joy and good energy into the world.”

‘Dancing With the Stars’

Where: ABC
When: 8 p.m. Monday
Rating: TV-PG-L (may be unsuitable for young children with an advisory for coarse language)